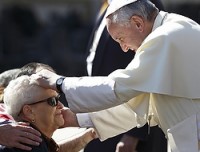 VATICAN CITY (CNS) — If the church excluded sinners, it would pretty much be empty, Pope Francis told thousands of people gathered for his weekly general audience.

In the history of the church, “some have been tempted to say that the church is the church only of the pure” and that others should be shunned, he said Oct. 2. “This isn’t true. This is a heresy.”

With close to 50,000 people gathered in St. Peter’s Square, Pope Francis used his audience talk to explain what Christians mean when they profess in the creed that the church is holy.

The church is holy because it belongs to God, has been saved by the blood of Christ and is guided by the Holy Spirit, he said.

Anyone who knows Christian history knows there were times when the church’s members sinned seriously, he said, and Christians aren’t pretending that isn’t true when they recite the creed.

Rather, he said, the creed affirms that “the church is not holy because of our merits, but because God makes it holy.”

“You can tell me, ‘but the church is formed of sinners; we see it every day,’ and this is true,” Pope Francis said. The church is made up of “sinful men and women, sinful priests, sinful nuns, sinful bishops, sinful cardinals, a sinful pope — all of us are like this.”

However, he said, “we sinners are called to let ourselves be transformed, renewed and sanctified by God.”

“The church, which is holy, does not reject sinners, it does not reject all of us,” the pope said. “It calls everyone to let themselves be embraced by the mercy, tenderness and forgiveness of the father, who offers everyone the opportunity to encounter him and walk the path toward holiness.”

Those who think they are so sinful that they doubt they have any chance of being part of the church have the attitude God wants everyone to have, he said. “The Lord wants you to say, ‘Lord, here I am with my sins.'”

“The Lord wants to hear us say, ‘forgive me, help me walk, transform my heart,'” Pope Francis said. In the church, sinners don’t encounter a judge ready to throw the book at them, but the father portrayed in the Gospel parable of the Prodigal Son, a father ready to throw a party when his son comes home after “hitting bottom.”

“God is always waiting for you,” the pope said.

And just as God waits with open arms, he said, God wants “a church that knows how to open its arms to welcome everyone. It is not the house of a few, but of everyone, a place where everyone can be renewed, transformed and made holy by his love.”

The church is the place when anyone and everyone can encounter Jesus, especially through the sacraments of reconciliation and the Eucharist, he said.

Pope Francis said Catholics should ask themselves, “Are we a church that calls and welcomes sinners with open arms and gives them courage and hope? Or are we a church closed in on itself?”

And, he said, to those who feel “weak, fragile and sinful, God says, ‘Don’t be afraid of holiness, of aiming high, of allowing yourself to be loved and purified by God.'”

All Christians are called to holiness, “which is not primarily doing extraordinary things, but allowing God to work” in their lives, Pope Francis said.

The text of the pope’s audience remarks in English is available online at www.vatican.va/holy_father/francesco/audiences/2013/documents/papa-francesco_20131002_udienza-generale_en.html.

The text of the pope’s audience remarks in Spanish is available online at www.vatican.va/holy_father/francesco/audiences/2013/documents/papa-francesco_20131002_udienza-generale_sp.html.