VATICAN CITY (CNS) — If many Catholics marry today without fully understanding the permanence of their bond and the grace of the sacrament, it partly is the fault of bishops and priests who did not give them the best teachers — committed married couples filled with the Holy Spirit, Pope Francis said.

In his annual meeting with judges and staff of the Roman Rota, a Church marriage tribunal, Pope Francis Jan. 25 said he marveled at the fact that for centuries, the Church ignored the example of Aquila and Priscilla, the married couple described in several parts of the New Testament as evangelizing with St. Paul.

“Evangelizing spouses,” the pope said, is “what our parishes need, especially in urban areas where the pastor and his priest collaborators will never have the time and energy to reach all the faithful who, while calling themselves Christian, do not frequent the sacraments and lack — or almost lack — knowledge of Christ.”

In reforming the process for judging the validity or the nullity of a marriage, the pope said, he insisted on the procedure being marked by pastoral “closeness and gratuity,” which are essential elements of evangelization that St. Paul found Aquila and Priscilla particularly capable of showing. They hosted the Christian communities in their own homes, reached out to draw others in and cared for those in need.

“Christian spouses,” Pope Francis said, “should learn from Aquila and Priscilla how to fall in love with Christ and become neighbors to families deprived of the light of faith, not through their own fault but because they were left at the margins of our pastoral work — a pastoral work for the elite that forgets people.”

“How I long for this message not to remain just a symphony of words, but to push priests, bishops and pastors to try, like the Apostle Paul did, to love married couples as humble missionaries ready to reach those squares and buildings of our cities where the light of the Gospel and the voice of Jesus don’t reach and don’t penetrate,” the pope said.

In addition, he said, they obviously are the best suited to lead marriage preparation courses. 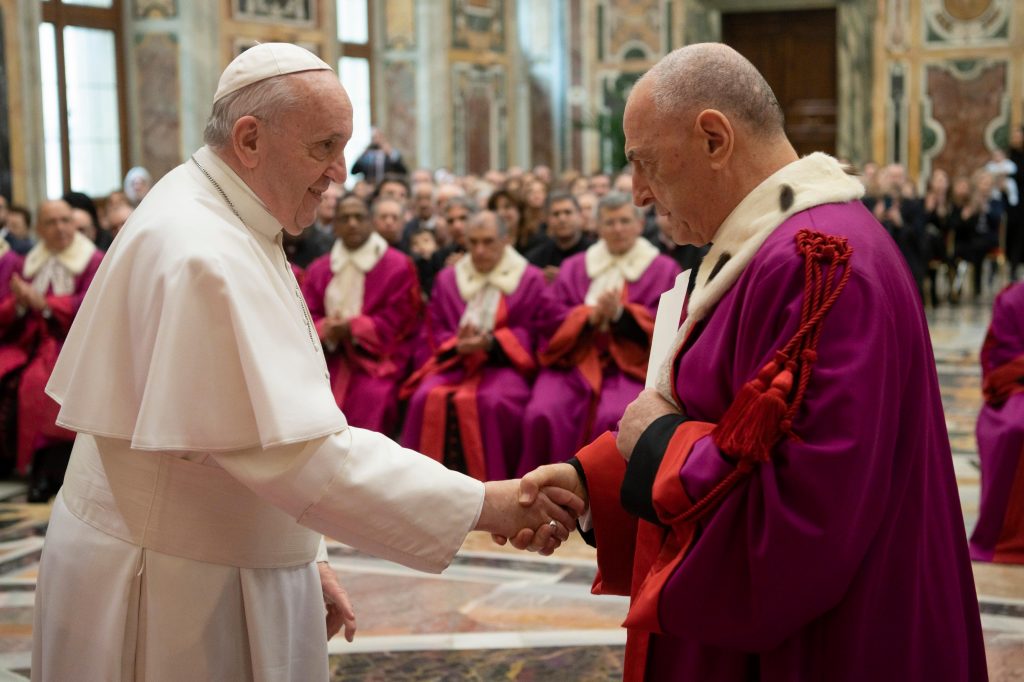 Pope Francis greets Msgr. Pio Vito Pinto, dean of the Roman Rota, at the Vatican Jan. 25, 2020, during an audience marking the beginning of the judicial year of the Roman Rota, a Vatican tribunal that deals mostly with marriage cases. (CNS photo/Vatican Media)

Catholic married couples, he said, need to step up like Aquila and Priscilla and offer to work with their pastors, “not in an autonomous way, but certainly filled with the courage necessary to wake from lethargy and sleep their pastors who are perhaps too still or blocked by the philosophy of the little circle of the perfect. The Lord came to seek sinners, not the perfect.”

Choosing to live among and minister only to a small group and preferring to spend time only with committed parishioners is not the way of the Gospel, he said. And the only way to reach out to others, is to listen to them and to try to understand the problems they face in their lives and their marriages.

“Often I’ve feared how God will judge us on these two things” — closeness and gratuity, the pope said. “In judging, have I been close to the heart of the people? In judging, did I open my heart to gratuity or was I concerned with commercial interests? God’s judgment on this will be very strong.”

And in seeking couples capable of evangelizing, the pope said, “we must be aware” that it is not priests who create them, but the Holy Spirit.

Such couples are out there, the pope said. “They are ready. They just haven’t been called.”

“We must be convinced — and I’d say, certain — that in the Church such married couples already are a gift of God and not because of our merit, but because they are a fruit of the work of the Spirit who never abandons the Church,” he said.

Pope Francis told members of the Roman Rota that they and their predecessors for more than 20 years have been discussing how a loss of faith and a serious lack of understanding of Catholic teaching can be a contributing factor to the lack of consent needed for a valid marriage.

To counter that, he said, the Church needs couples like Aquila and Priscilla, “who speak and live with the authority of baptism,” and are living witness of the beauty of Christian marriage and family life.