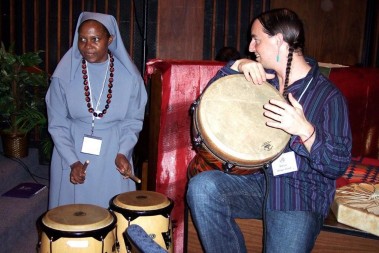 Helping provide music for the convocation were attendees Sister Christine Nantaba, IHMR, formerly of Uganda and now teaching in Indianapolis, and Marcus Briggs-Cloud of the Muskogee Nation.

NOTRE DAME — The universality of the Catholic Church and the cultural diversity of the Church in the United States were on display here May 6-8 in the person of 300 Church leaders with cultural heritages that span the globe. The Catholic Cultural Diversity Network Convocation 2010 produced a joyful energy as laity, priests and religious discussed how to build unity in this diversity to enhance Catholic identity.

The convocation was the first step toward developing and disseminating intercultural competency guidelines in the U.S. Church, a priority set by the United States Conference of Catholic Bishops. The 18 bishops who came to listen included five members of the Bishops’ Committee on Cultural Diversity in the Church, which sponsored the convocation, along with the University of Notre Dame’s Institute for Church Life.

Bishop Kevin C. Rhoades of Fort Wayne-South Bend welcomed the group and reflected on the “beautiful diversity of this diocese.” He noted that the first preaching of the Gospel here was by French missionaries to the Potawatomi Indians. Then came French, German and Irish immigrants, followed by African-Americans, Eastern Europeans and Hispanics.

“Our unity in diversity is both a gift and a challenge,” Bishop Rhoades said. “Our different cultures are a blessing and should be mutually enriching.”

In opening the convocation, Bishop Jaime Soto of Sacramento, chairman of the U.S. Bishops’ Committee on Cultural Diversity, explained that it is necessary to engage the culture in order to live the Gospel to its fullest. However, the Church can’t engage the cultures of a pluralistic society without working with the diverse cultural communities, which he called “the hearts, hands, eyes and talents, vision and vitality of the whole Body of Christ.”

Bishop Soto told the gathering that the bishops were there to listen to the voices of the diverse cultures and to dialogue with them, assuring the people that “We are determined to restore a social regard for the dignity of the human person, as well as foster a solidarity for those most vulnerable in our society, from the unborn to the immigrant, from the incarcerated to the war-ravaged refugees.”

Apostolic Nuncio Archbishop Pietro Sambi was on hand to convey the blessings and love of Pope Benedict XVI. The nuncio noted that the convocation reminded him of what the first Christian community was like, for it welcomed people from many different places. And he called for a renewed effort to develop Catholic leaders from all cultures, which he said was necessary for the growth of the entire Church.

The 300 leaders invited to the convocation were asked to identify with one of six cultural “families,” which were quite diverse themselves: African American, Asian Pacific, European American, Hispanic, Native American and people served by the bishops’ subcommittee on Pastoral Care of Migrants, Refugees and Travelers (PCMRT). People falling under the PCMRT umbrella include immigrants, traveling people who have left their home countries, migrant workers, seafarers, airport/airline workers and circus and carnival workers.

At the start of the convocation, a spokesperson for each “family” gave a “witness” statement about who the people in that family were, the blessings they’ve enjoyed, the obstacles they face, the opportunities they embrace, and their vision for the future. Many people seemed surprised but comforted to learn that they shared many common experiences and concerns with people in other cultural families. 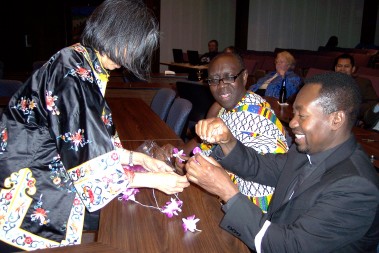 After the convocation banquet, participants shared aspects of their culture with each other. Virginia Farris of Washington, D.C., and a member of the Asia Pacific Family, demonstrates lei making for Dominic Adu-Gyamfi, formerly of Ghana and now of Virginia, and Father Jean Yvon Pierre, formerly of Haiti and now serving the church in New York.

Some of those common experiences were a strong faith maintained in diversity, but also a sense of invisibility or even exclusion in the Catholic Church, a lack of priests and Church leaders from their own cultures, and a lack of resources at the national and diocesan level for pastoral outreach to their communities. Most of the groups also were concerned that their young people were being torn between their cultural and religious values and practices, and the prevailing secular values of American society.

Speaking for the African American family, Therese Wilson Favors of Baltimore noted an experience of racism and lack of affirmation of the value her people bring to the Church in the U.S., and she drew applause when she expressed the hope that “the Church may be what she says she is: Catholic, culturally diverse, with all God’s children working in His vineyard and unified at the Eucharistic table.”

The European American spokeswoman, Joyce Francois of Detroit, said that the robust Catholic culture her family once enjoyed has vanished, and most of their people have lost their specific ethnic identities. In the Church, their cultural dominance is waning, which she said was a healthy thing for the Church, but sometimes was not understood and thus mourned by some of her people.

At the end of the convocation, a panel of eight bishops reflected on the meeting and took questions. One question that seemed to resonate with the entire assembly was about how to transfer back to the home dioceses the very positive experience of the convocation, where multiple cultural groups interacted freely and bonded through their shared experiences and ideas.

Bishop Gerald Barnes of San Bernadino, a member of the Bishops’ Committee on Cultural Diversity said that the witness statements of the families were so powerful that he would like to see them be used for group discussion at the parish and diocesan levels. Bishop Soto announced that the Committee on Cultural Diversity was developing a manual for cultural competence that will help train people at the regional and diocesan level. A blueprint for that effort was distributed at the end of the convocation, and the attendees were invited to reflect on that blueprint and send comments and ideas to the committee’s secretariat by June 15 for deliberation by the committee.

Each family also had very specific issues, such as:
• Joan Perou of Uniondale, N.Y., and Father Eulalio Ibay of Corpus Christi, Texas, reported that members of the PCMRT want to contribute and be part of the Church, but they are challenged by long periods of separation from family, as well as difficulty accessing regular parish services because of their mobility.
• Philip Tran of Seattle, speaking for the Asia Pacific family, noted his family’s “vast” diversity, with its people coming from hundreds of different cultures and faith traditions, yet having the desire to live in unity, but lacking a structure to foster that unity.
• Alicia Marill of Miami Shores, Fla., and Armando Cervantes of Orange, Calif., spoke for the Hispanic family. They noted their family’s own diversity, which sometimes brings division within the family, but cited a unified hope to be able to live life without fear of deportation or inhumane treatment and to be treated with respect and equality, as people who have been contributing to society and the Church and will continue to do so.
• Tasha Smith of Grand Rapids, Mich., said that her Native American Catholics still struggle to find where they belong in contemporary society and the Church, while at the same time are sometimes viewed by fellow Native Americans as traitors for leaving behind their own traditional beliefs for Catholicism.