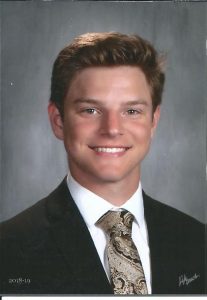 Faith and science are compatible and express the vastness of God’s intelligent design of creation. Bishop Dwenger High School valedictorian Christopher Wilkins will embark on his college studies at Brown University this fall to study chemistry and astronomy, subjects which interlock his interests in science fiction and how the universe operates.

He explained that his Catholic faith has increased his awe at the mysteries that still exist in space.

“Faith has allowed me to explore the interface between the micro and the macro through intelligent design. It has unveiled the connection between molecules and the cosmos, as God’s hand bears a striking resemblance on both the largest and smallest magnitudes. This intelligent design is precisely what gives purpose to learning, or else knowledge would be meaningless.”

Part of Wilkins’ faith involved service exercised through various clubs, sports and ministries during his career at the Fort Wayne high school, including National Honor Society his junior year and NHS president his senior year; Spanish Club all four years, serving as club secretary his senior year; a member of Student Council during his junior and senior years; Ping Pong Club freshman and sophomore years; Bishop Dwenger baseball all four years and travel baseball all four summers; umpiring St. Joe Little League during the summers; volunteering as a Conservation Crew Member at Fort Wayne Children’s Zoo the summer after junior year; and serving as a volunteer at Saint Anne Retirement Communities and Turnstone Center all four years.

Likely the most monumental achievement of his high school career is co-founding the Sustainable Environmental Action Club his junior year and serving as its president. In this capacity, Wilkins and the club members organized a fundraising event for the construction of a well at Millennium School in Uganda, which is run by Catholic religious and laity. His most cherished high school memory, he said, is meeting with Sister Milly of the Ugandan school and watching a video of the well being built on-site — construction that was made possible by a SEA Club donation of $1,300.