White-vested priests filled the pews of St. Matthew Cathedral and the Cathedral of the Immaculate Conception on Monday, March 29, and Tuesday, March 30, as clergy from both sides of the Diocese of Fort Wayne-South Bend attended the solemn and beautiful Chrism Masses celebrated by Bishop Kevin C. Rhoades. The Masses were not open to the public, although the bishop expressed his happiness at celebrating the Chrism Masses with those joining in via livestream video and the numerous priests in attendance. He expressed hopes for a greater assembly of the faithful at next year’s Chrism Masses.

At the Fort Wayne Mass, the entrance hymn chosen was “O Christ, High Priest Eternal,” written by Msgr. Michael Heintz. The hymn focuses on the priesthood and passion of Christ. 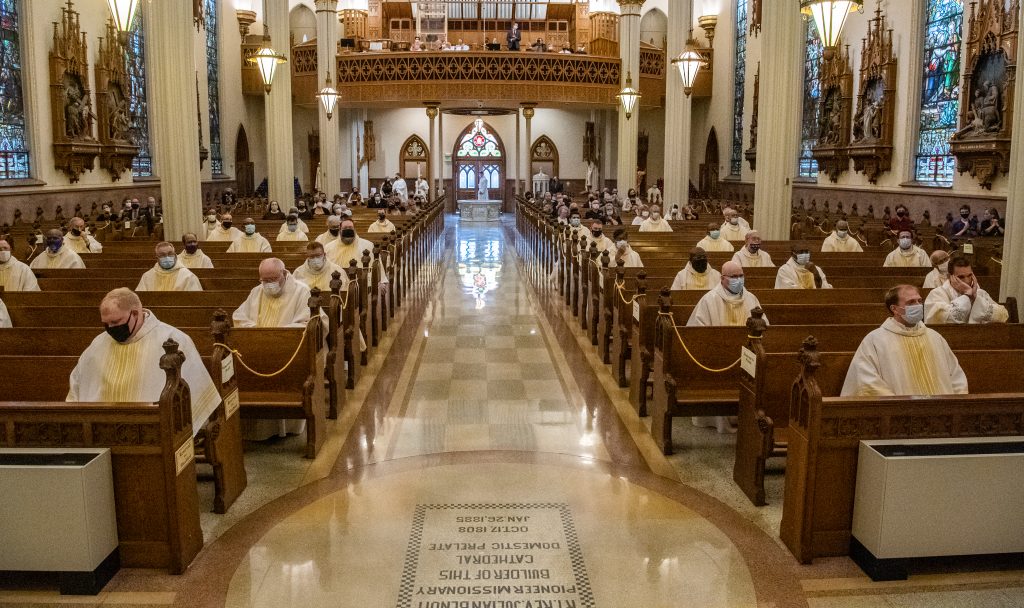 Photos by John Martin
Priests are asked to reaffirm their vocations at the yearly Chrism Mass, so many of them filled the Cathedral of the Immaculate Conception in Fort Wayne March 30. The Chrism Mass is also a time for them to share in the fraternity of their priesthood.

In his homily, Bishop Rhoades addressed the priests present, saying, “All of us, priests and laity, deacons and religious, are God’s anointed ones, united to the Anointed One, the Christ, by our Baptism. … We’ve all been anointed with the sweet-smelling oil of chrism. God has anointed us to His service in Baptism and Confirmation and given us a mission: to offer Christ to the world and the world to Christ.”

Chrism is a mixture of olive oil and balsam, a tree resin mentioned several times in the Bible. Balsam was a costly gift, one that the Queen of Sheba offered, among other gifts, to King Solomon.

The chrism oil was consecrated by the bishop and will be used throughout the year in the sacraments of baptism, confirmation and holy orders. 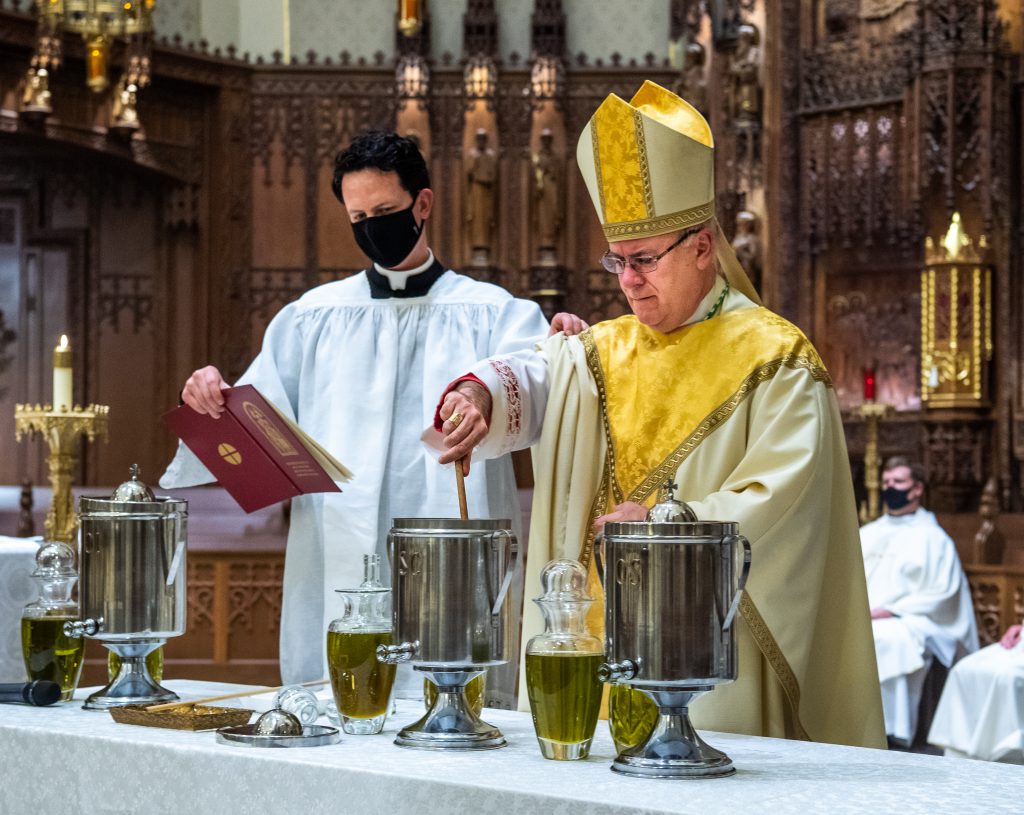 Bishop Kevin C. Rhoades consecrates the oil of the sick and prepares the sacred chrism at the South Bend, left, and Fort Wayne Chrism Masses. These oils will be used by parishes in the Diocese of Fort Wayne-South Bend throughout the year during sacred occasions such as baptisms and anointing of the sick. 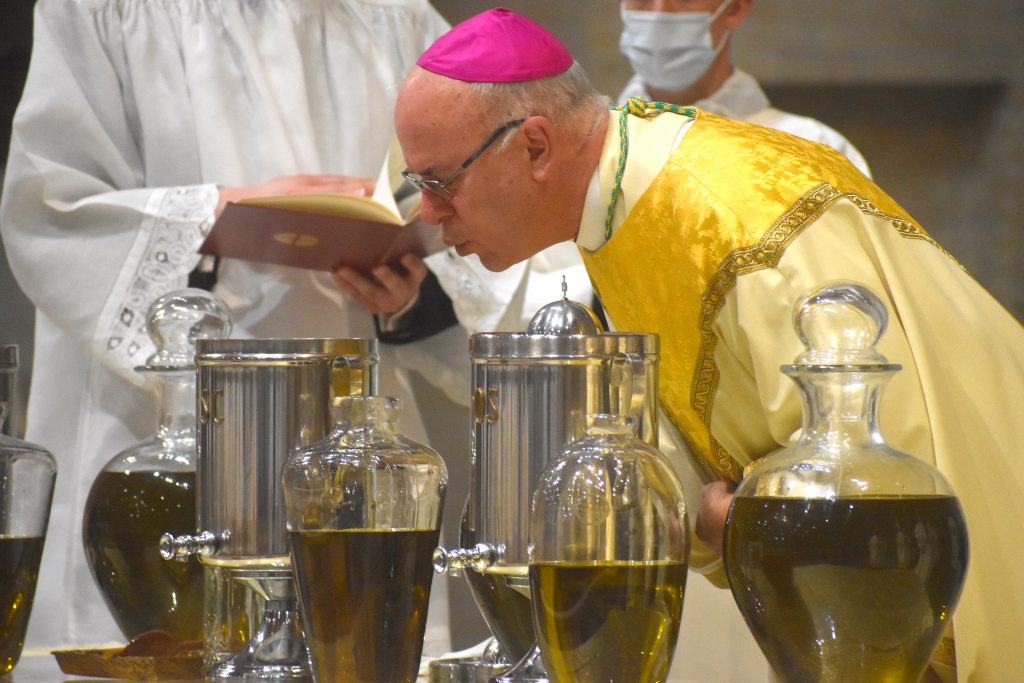 The oil of catechumens and the oil of the sick, on the other hand, are composed simply of olive oil and are blessed rather than consecrated. He stressed that catechumens who will be anointed with sacred chrism need strength to compete for the ultimate prize of their immortal souls, as do all Christians.

“Olive oil symbolizes many things. One of them is strength,” said Bishop Rhoades.

Olive oil also has also been used for medicinal purposes through the ages, and the oil of the sick “will be God’s medicine that we priests as spiritual doctors will use in the sacrament of the anointing of the sick,” he said.

Bishop Rhoades asked those present and those participating virtually to reflect on their life’s vocations, particularly focusing on the priestly vocations of the clergy in attendance. “We were anointed to bring good news to the poor, the joy of the truth of the Gospel, ‘the joy,’ as Pope Francis says, ‘that touches people’s hearts,’ the joy of God’s mercy and love,” he told them.

Being a priest is not an easy task in a time of deep political divisions and conflict even within the Church, said the bishop.

He reflected on St. Thomas Aquinas’s writings on the cardinal virtue of fortitude. “God calls us to serve Him and His people with humility, with zeal, with courage, with fortitude and with love. This is what we have been anointed to do. And we are to do so with joy. Let us not forget that the oil with which we have been anointed is the oil of gladness.”

He ended by invoking the aid of St. Joseph to “watch over, guard and protect us as we seek to live the anointing in his Son that we have received from the Holy Spirit!”

The priests present, both the recently ordained and those with decades of service to the Church renewed their priestly promises, rededicating themselves to the ministry in which God has called them. Bishop Rhoades then asked those present in person and virtually to pray for the diocese’s priests and for himself, that they might remain faithful to the teachings of Christ and vigilant in pastoring their flocks.

Many diocesan seminarians took part in the Chrism Masses as well, and three of the seven deacons who, God willing, will be ordained to the priesthood in June, presented the oils to the bishop for blessing and consecration. At the end of Mass, the bishop stated that he looked forward to their ordination with great joy, when he would profusely anoint their hands with the sacred chrism he had just consecrated.