Bishop John M. D’Arcy prays at the altar during the rededication of the MacDougal Chapel in honor of St. Mother Theodore Guérin on Friday, Oct. 16. The chapel has been renovated.

FORT WAYNE — It was an anticipated day of rededication. Bishop John M. D’Arcy rededicated the MacDougal Chapel in honor of St. Mother Theodore Guérin on Oct. 16. Joined in the celebration of Mass by Cathedral of the Immaculate Conception rector Father Robert Schulte and assisted by Deacon Fernando Jimenez, who will be ordained Saturday, Oct. 31, to the priesthood, Bishop D’Arcy spoke in his homily about living stones and the offering of oneself.

“We consecrate marble and wood in order that our hearts be consecrated. … The whole idea that the holy Eucharist is making present the Lord’s sacrifice that all those present will become a living sacrifice,” Bishop D’Arcy said. “The whole idea of holy Communion points towards the offering of oneself to God as Jesus Christ offered himself, which means seeking his will and doing it.”

In this Year for Priests, Bishop D’Arcy spoke of St. John Vianney, patron of priests, that “every time he offered Mass, he offered his whole self to God.” He encouraged priests and the faithful to offer themselves to God and to do his will.

Bishop D’Arcy noted the purpose of the chapel was tell God “I give you everything I have — myself.”

The chapel was originally built with the intention that the Blessed Sacrament would be exposed 24 hours a day. Adoration, after Friday Masses, is still an active part of the chapel.

“Adoration in front of the Blessed Sacrament is like a continuation of the Mass,” Bishop D’Arcy noted. “He is present and so we continue to offer ourselves, for our families and our children and to do his will.”

St. Mother Theodore Guérin is considered as the patroness of Catholic schools for the diocese and the founder of the Sisters of Providence at Saint Mary-of-the-Woods. She provided sisters for the first Catholic school in Fort Wayne, St. Augustine Academy located on Cathedral Square where the chancery is located. A statue in honor of Mother Theodore will be dedicated on the Cathedral Square within a month, Bishop D’Arcy told the congregation.

Bishop D’Arcy spoke of St. Hedwig, whose feast day is Oct. 16. She was a queen, a spouse, a mother before becoming a religious who was devoted to the poor.

He also spoke of St. Margaret Mary Alacoque, whose feast day is also Oct. 16, who promoted the devotion to the Sacred Heart of Jesus. Her experience of Jesus was that of a merciful, forgiving love— a love that was divine, but also human.

The chapel that love built 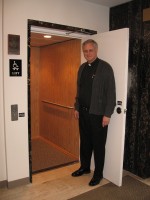 Father Robert Schulte stands at the door to the new elevator at MacDougal Chapel.

FORT WAYNE — More than a half century after its dedication, few who enter MacDougal Chapel on Cathedral Square in Fort Wayne, are aware that the chapel exists because of respect and love that a brother had for his sister.

Michael and Catherine MacDougal grew up in the cathedral parish and attended Cathedral Grade School. Catherine attended St. Augustine’s Academy and Michael attended Central Catholic High School for boys. Michael became vice president and director of Peoples Trust and Saving Bank. Neither one ever married and they lived with one another until Catherine’s death in 1926. Michael died in 1945. In his will he left a bequest of $195,000 to build an adoration chapel in memory of his sister Catherine.

Appropriately, the building is called the MacDougal Chapel. However in January, 1951, it was dedicated by Bishop Noll as the Blessed Sacrament Chapel because all artwork and symbols, in glass, metal or stone refer to the life of Christ and his ultimate institution of the Blessed Sacrament. In one window there is a cock, representing Peter’s denial of Christ; and in another, Peter holds the golden key of absolution.

Snakes, eagles, fish, a windmill, battle axes and a butterfly representing resurrection are all found in stained glass to represent events of the Gospel.
In the past year, MacDougal chapel has experienced a major makeover. Outdoors, an extra drop-off lane leaves passengers out at the bottom of a convenient handicap ramp leading to the front entrance, where electronically controlled doors open at the push of a button. Among the bricks of this ramp are 178 memorial bricks bearing the names of loved ones and donors who contributed to the chapel renovation.

In lieu of the ramp, visitors can use a ground level entrance and an elevator to get to the chapel level. New pews with padding, a new tile floor and new lighting all reveal and enhance the subdued but rich combination of color found in the marble, glass and furniture of the interior. The sanctuary has had some subtle changes allowing more space for the celebrants. A new marble ambo and curved seating for additional celebrants have also been added.