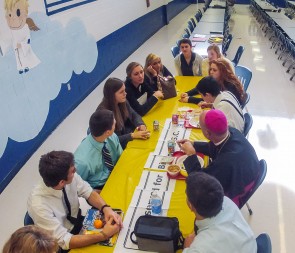 Student council members of Bishop Dwenger High School provide an impressive conversation with Bishop Kevin C. Rhoades who made a pastoral visit to the Fort Wayne high school on Jan. 15.

Next week is the annual celebration of Catholic Schools Week, beginning Sunday, January 27th. It is a time to celebrate the blessings of Catholic education and to renew our commitment to this important mission of the Church: the education of our children and young people in the Catholic faith and the Christian moral life. I am very proud of the Catholic schools in our diocese and their educational success: our five Catholic colleges and universities, our four diocesan high schools, and our 41 parish or inter-parochial elementary schools.

Last week, I had the joy of celebrating Mass and making a pastoral visit to Bishop Dwenger High School. It was a great day. I was edified by the wonderful school spirit and the very tangible Catholic atmosphere of the school. Visiting various theology classes allowed me to see first-hand the excellent catechetical formation our young people are receiving. I was perhaps most impressed by the conversations I had with students, particularly the very impressive Student Council representatives with whom I enjoyed lunch. We spoke on a variety of topics. One of the young men intends to enter the seminary next year. They all manifested an enthusiasm for their Catholic faith. I left the school with renewed hope for the future of the Church.

Catholic education began in our diocese in the 1840’s and has grown and flourished through the years. It began when a French missionary priest, Holy Cross Father Edward Sorin, along with six Holy Cross brothers arrived at Notre Dame du Lac. They began a humble school in a two-story structure they built in 1843 that still stands on the campus of the University of Notre Dame and is now called “Old College.” It now houses the Holy Cross undergraduate seminarians at Notre Dame. In that first Catholic school of our diocese, boys of grade and high school age received a Catholic education, as did young men of college age, the first students of the University of Notre Dame.

In 1846, at the request of Father Benoit, Saint Mother Theodore Guerin sent her Sisters of Providence to Fort Wayne to staff the first Catholic school for girls in the diocese: Saint Augustine Academy. The Sisters of Providence and the Brothers of Holy Cross, along with some lay Catholics, were the pioneer Catholic school teachers of our diocese. The Marianite Sisters of the Holy Cross followed closely with their opening of Holy Angels Academy in Mishawaka and Saint Mary’s Academy (now College), at Notre Dame. They set the course for the future of many other religious communities, especially of women, who would serve in our schools for the next 150-plus years.

In the beginning, there were many attacks on Catholic schools during that time of much anti-Catholic bigotry in Indiana and in other areas of the United States. The bishops, priests, religious, and lay faithful saw the need to establish Catholic schools to hand on the faith in a culture often inimical to Catholicism. In the 19th century, Catholic schools were a top priority of the Church in our country. At the first Plenary Council of Baltimore in 1852, the U.S. bishops urged the foundation of Catholic schools, urging Catholics to “make every sacrifice which may be necessary for this object.”

Catholic schools remain a priority for us in 2013. Though we live in very different historical circumstances from those of the 19th century, we face new challenges in light of the growing secularism and relativism of our culture. I believe our Catholic schools are needed today as much as they were needed 150-160 years ago.

In our diocese today, we have 17,010 students attending the five Catholic colleges and universities in our diocese. We have 3,185 students in our four diocesan high schools. We have 10,220 students in our Catholic elementary schools. Many sacrifices have been made, and continue to be made, so that our children and young people have the opportunity for an excellent education that includes formation in the Catholic faith, strong moral values, and prayer.

Catholic Schools Week is an opportunity not only to celebrate our Catholic schools, but also to renew our commitment to the Catholic mission and academic excellence of our schools. Catholic education, if it is worthy of the name, must be centered in the person of Jesus Christ. Catholic schools should be known for their witness to the Gospel, led by educators who are committed to the teachings of the Church and the moral demands of the Christian life. The Catholic school should be a genuine community of faith, faith that is lived in loving service of others. The Catholic school curriculum should integrate faith, culture, and life. In sum, Catholic schools must be “Catholic” in deed as well as in title.

In 2008, during his apostolic visit to Washington, DC, Pope Benedict XVI said to Catholic educators: “Education is integral to the mission of the Church to proclaim the good news. First and foremost, every Catholic institution is a place to encounter the Living God, who in Jesus Christ, reveals his transforming love and truth.”

In this age of the new evangelization and in this Year of Faith, I wish to state that our Catholic schools, when faithful to their mission, play a critical and irreplaceable role in the Church’s evangelizing mission. I thank all the principals, teachers, administrators, and staffs of our Catholic schools for their hard work and dedication. I thank our priests, school board members, and benefactors for their commitment to our schools. I thank Dr. Mark Myers, our superintendent of schools, and the staff of our diocesan Catholic Schools Office for their leadership. And I thank our parents who make many sacrifices to provide for the Catholic education of their children.

May the Lord bless our Catholic school communities with renewed faith and ardor for their holy mission! Saint Mother Theodore Guerin, pray for us.