VATICAN CITY (CNS) — Synod members called for the Catholic Church to deepen its theology in a way that would help people recognize “ecological sins.”

According to a Vatican News summary of the Oct. 8 afternoon session, members said that an “ecological conversion” was necessary to ensure that Christians understand the “gravity of sin against the environment as a sin against God, against one’s neighbor and against future generations.”

“No to individualism or indifference that makes us look at reality like a spectator, like looking at a screen,” the summary said. “Yes to an ecological conversion centered on responsibility and an integral ecology that places at its center human dignity, which is too often trampled.” 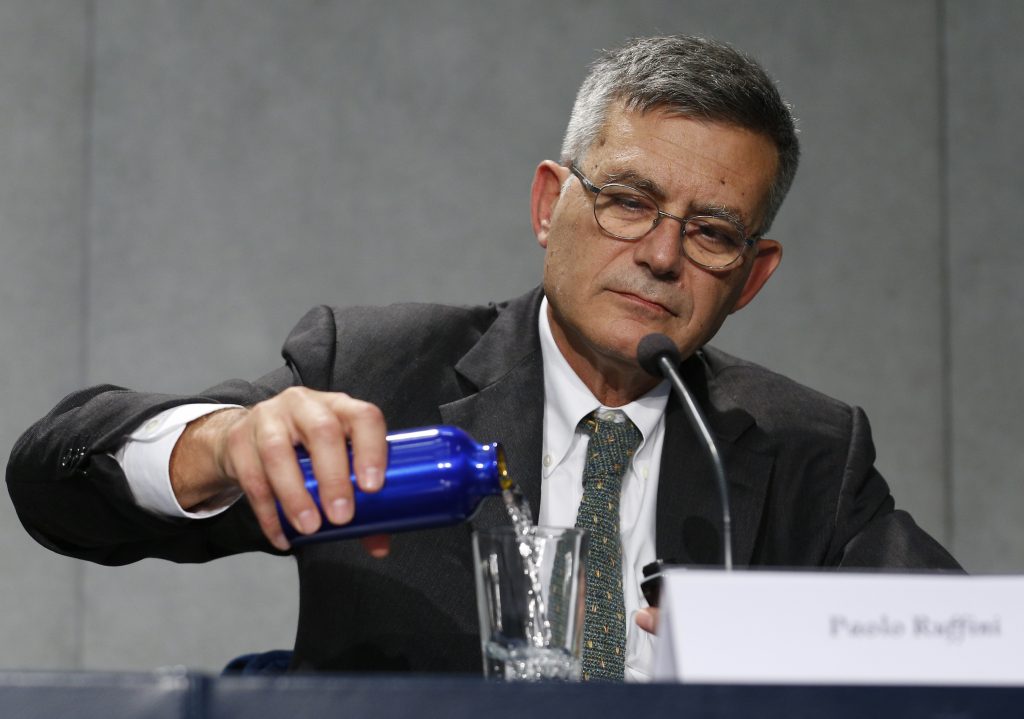 Paolo Ruffini, head of the Vatican Dicastery for Communication, pours water into his glass during a press briefing following a session of the Synod of Bishops for the Amazon at the Vatican Oct. 8, 2019. (CNS photo/Paul Haring)

At a Vatican press briefing Oct. 9, Paolo Ruffini, prefect of the Dicastery for Communication, said that a number of interventions given by bishops, observers and delegates from other Christian churches dealt with the issue of ecology and the need for a “profound ecological conversion that passes from a technocratic paradigm to a caring paradigm.”

Ruffini reported one member saying that Christianity is “a call to an ecological morality in the knowledge that ecological sins exist, which also can be described as ‘ecocide.’”

Through catechesis and particularly in the sacrament of penance, the reality and impact of ecological sins can be explained, he said a synod participant suggested. Like other sins, ecological sins “can be considered either minor or grave, but in any case they offend God and neighbor.”

Ecological conversion is, first and foremost, “a conversion to holiness,” one member said, citing the examples of German Salesian Father Rudolf Lunkenbein and Simao Cristino Koge Kudugodu, a lay member of the Bororo indigenous community in Mato Grosso, Brazil, where Father Lunkenbein served.

The German priest, known for his defense of indigenous reserves, was shot and killed in 1976 in the courtyard of the Salesian mission where he lived. Koge died attempting to save Father Lunkenbein’s life and, with his final breath, forgave his murderers.

Synod members called on the Church, especially the media, to highlight the lives of “good priests and not just the current scandals that unfortunately occupy so many pages in newspapers.”

Their lives, the Vatican News summary said, “have an enormous power of attraction among young people, who call for a renewed pastoral ministry (that is) more dynamic and attentive.”

Father Giacomo Costa, secretary of the synod’s information commission, told journalists that among the issues addressed during the synod’s Oct. 9 morning session was the theme of “intercultural and interreligious dialogue.”

One member addressing the synod, he said, stated that indigenous communities yearn for “a dialogue that calls for respect for other cultures,” a form of dialogue that, “in the end, is respect for the Gospel.”