Educating a child is never the work of a single person; parents, teachers, administrators and so many others play a part in the lifelong learning process. Educating special needs children is no different. Catholic schools are not typically known for outstanding special education programs, but joint efforts between the aforementioned people are looking to make great strides in special education within the Diocese of Fort Wayne-South Bend.

Juanita Oberley has been involved in special education for over ten years, first as a teacher at St. Vincent de Paul School in Fort Wayne, then as special education coordinator at Bishop Dwenger. Now she molds future teachers in the field as an associate professor of education at the University of Saint Francis. Recently, she has become involved with the ministry Belonging, a group that is concerned with helping the Church reach out to those with disabilities and bring them into greater participation in all areas of Catholic life. A branch of the group has lately increased its focus on inclusion within the Catholic schools.

“I say this to people: there’s this misconception that special education doesn’t happen in Catholic schools – no, it’s reimagined,” Oberley emphasized. “Mass, sacraments, prayer services, the rosary – all those things are, in my mind, unique services. They’re services to get kids to heaven … to teach them about their faith. That’s special education.” 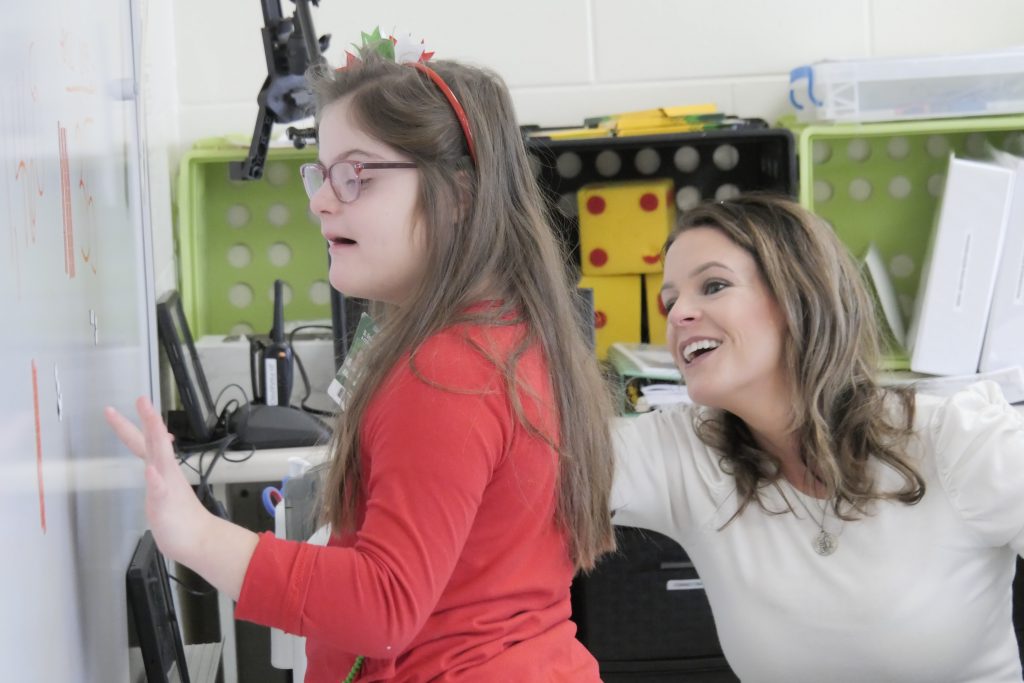 Photos by Jennifer Barton
At St. Vincent de Paul in Fort Wayne, special education teacher Amanda Arnold works with a student in her resource classroom. A collaboration between parents, educators and administrators headed by the Belonging ministry for people with disabilities is moving Catholic schools within the Diocese of Fort Wayne-South Bend toward increasing educational programs for students with physical, emotional and intellectual disabilities.

Through the aid of Allison Sturm with the Ministry with Persons with Disabilities, members of the Belonging school group met with Dr. Joe Brettnacher, superintendent of Catholic schools, to find ways to provide more services for students with disabilities. In her role for the diocese, Sturm helps connect parents, teachers and principals with others who can help them find the answers they are seeking. She said that parents of special needs students “can ask me any question and I’m going to look into it.”

Out of that meeting came a push to move diocesan policy forward by updating documents and guidance and making it easier for parents to find services for their children. The first step in the process was a survey sent out to all Catholic schools to determine what services each one provides. Individual Catholic schools do not – and realistically should not, as Oberley argued –cover every need, which even individual public schools cannot. But the overarching goal is to accommodate students with disabilities within the realm of Catholic education as much as possible.

Associate superintendent David Maugel has been placed in charge of the special education initiative, and two principals, both with backgrounds in special education, have been identified as administrative representatives on either side of the diocese. The diocese is also helping fund a study by the group ADAC to ensure that the schools are getting their Individuals with Disabilities Education Act (IDEA) funds. Dr. Brettnacher has also created a Padlet electronic “binder” with special education resources.

Dr. Brettnacher knows that in the three years he has been superintendent, the diocese has not made the progress in this area that he would have liked, but by having Maugel in place to work toward this goal, he is confident that big changes are coming. The main thing, he said, is that, “we want parents to be informed about what our schools have to offer … to be informed about our policies.”

With 43 Catholic schools under the Catholic schools office, Maugel admits that reforming special education will be a “huge undertaking,” but he is hoping to see improvements at the local level, “enhancing skills and knowledge and maybe slowly branching into other schools that maybe recognize the need for it and then being able to find ways to support them.” 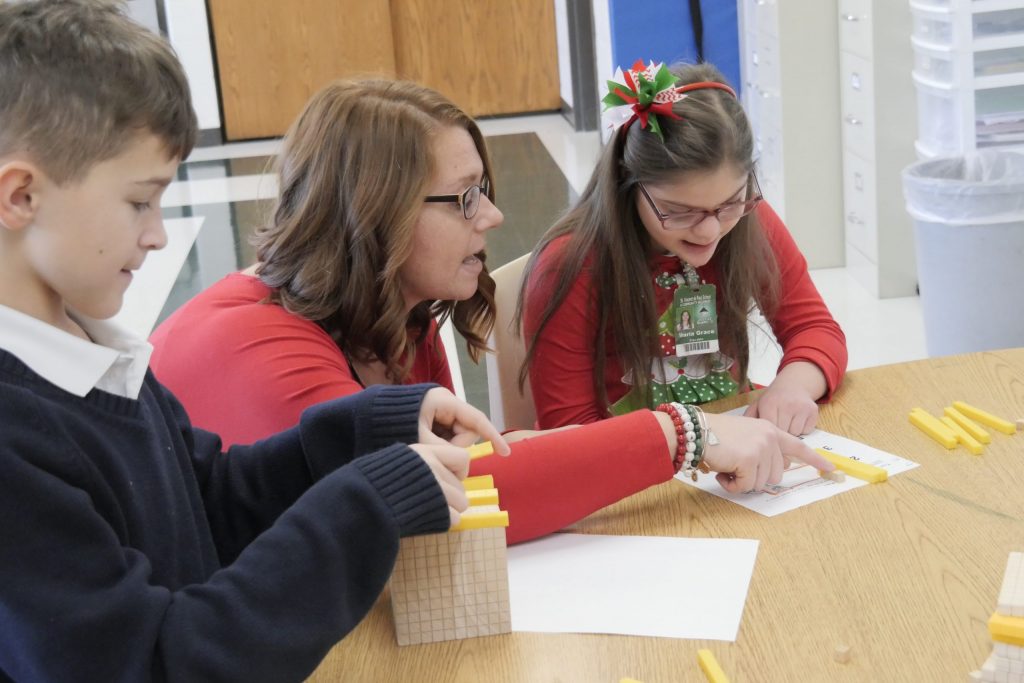 One diocesan policy that many parents may not know about is that if their parish school does not offer services that a child needs and another school might be a better fit, families can still get parishioner rates at that school.

Special education in the Catholic schools is a complicated field to navigate. Education plans often differ from those used in the public schools, there is no centralization in the Catholic schools as there often is in public schools, but most complicated of all is learning the laws for funding services. Belonging and the Catholic schools office are working together to tap individual resources who understand the complex aspects of special education and bring them together to spread awareness across schools and parishes in the diocese. They are also in the planning stages of working with autism centers on both sides of the diocese to better equip these students with everyday life skills for their future needs.

“It’s not easy work, but it’s very rewarding,” Oberley stated. She has a passion for helping students with disabilities. This had not been her initial career path, having wanted to teach English at the high school level. But in her studies at the University of Saint Francis, where she earned her bachelor’s degree, the requirement at the time was a dual study in both general and special education. Her first job practically landed in her lap when St. Vincent called her about filling a position for a teacher on maternity leave. The job happened to be in special education.

Named for an aunt that passed away as a toddler, and who happened to have Down syndrome, Oberley felt an immediate connection with her special needs students. “Our choices have consequences, but I feel like you’re led to a choice if you just open your eyes and listen. I ended up here and never left,” she remarked.

Not only does she now teach others who will go on to work with children who have disabilities, but she is an ardent advocate for the inclusion of students of all abilities in Catholic classrooms to the greatest extent possible. She gave a presentation at Catholic Mission day on both sides of the diocese on the topic and sometimes receives calls or emails from other educators asking for advice about individual students and how to best meet their needs.

Oberley professed herself amazing at the timing of the initiatives within the diocese and how it coincided with the Vatican’s launch of the #IamChurch campaign, which features people with disabilities who actively participate in their faith. Both the launch of #IAmChurch and the Catholic schools meeting took place in early December.

Part of the new plan is a disabilities awareness curriculum that Oberley and a colleague are working on for schools to use, which will give individuals with disabilities an opportunity to visit schools and talk to students about their differences. This also opens conversations about how to respectfully treat people with disabilities. “These are people first and they happen to have a disability or they learn differently… they still have value, they still have dignity, they’re still created in the image and likeness of God, so as long as we focus on those things, it’s fantastic,” Oberley said.

Educating people with disabilities is more than a job for Oberley; it’s a vocation, as it should be for all who participate in special education. “It’s a calling and you’re signing on to help get all these children to heaven, too. It’s a huge responsibility and a huge undertaking,” she said. “When I die and I’m trying to get into heaven, they’re going to say, ‘Did you do everything you could to help your kid get to heaven?’ and I hope I can answer ‘yes.’”

The Belonging Catholic schools group does not only consist of educators, but also parents such as Sarah Olson. Olson helped bring a sensory-friendly Mass to her home parish of St. Vincent de Paul in Fort Wayne and is “really excited to be part” of the movement toward inclusion in schools for students such as her son John, who has autism. Two of her other children were born deaf and have cochlear implants, so she wants to support their Catholic education and help pave the way for other deaf students. “They’re not the first and they won’t be the last, so let’s try to get this right for them, for all the kids.”