In this season of prayerful preparation, the Indiana Catholic Conference is making plans to more powerfully and effectively bring the light of Catholic social teaching to bear on society’s most important issues.

As the public policy voice of the Catholic Church in Indiana for the past 55 years, the ICC hopes to build on its many successes while employing new approaches and technologies to amplify its messages and its reach. The start of the 2022 Indiana General Assembly is only weeks away, and the ICC will once again be spotlighting and weighing in on key legislation — while engaging as many Catholics as possible in the process. 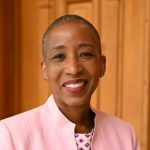 “The ICC is looking forward to continuing its work on behalf of the Church,” said Angela Espada, the sixth and current executive director of the ICC. “We are encouraged by the participation and interest shown in the podcasts and webinars we presented this past year, and we plan to expand on those. In 2022, we hope to continue to educate ourselves, legislators and the faithful on Catholic social teaching as the foundation for our participation in the public forum on issues ranging from the environment to the respect for the dignity of human life.”

Indiana was a pioneer in formalizing a way for the Catholic Church to speak on both state and national issues. When the ICC was founded in late 1966 by a small group of dedicated Catholics in Indiana, it was one of the first entities of its kind in the nation.

Since that time, the ICC has served as the coordinating body and public policy voice of the five Roman Catholic dioceses in the state — the Archdiocese of Indianapolis, the Diocese of Evansville, the Diocese of Fort Wayne-South Bend, the Diocese of Gary and the Diocese of Lafayette-in-Indiana. Through the efforts of dedicated staff members, diocesan and parish liaisons, and board and advisory council members, the ICC provides the five Catholic bishops of Indiana with a means to work together in the common interest of the Church and of citizens throughout the state; officially represents the Church in public policy issues, particularly legislation under consideration at the Indiana General Assembly; and informs Catholics around the state about the Church’s position on important issues through its easily accessible I-CAN network and engages them in taking action.

In all its efforts, the ICC is guided by the rich history of Catholic social teaching, which is 2,000 years strong but whose first touchstone in the modern era is considered the groundbreaking papal encyclical “Rerum Novarum” in 1891. In this pivotal teaching document, Pope Leo XIII addressed the turmoil of the late 19th century, when the Industrial Revolution and the beginnings of communism were leading to social upheaval and sweeping changes in economies and societies.

Since that time, popes have used encyclicals at crucial moments in history to reflect on current issues through the lens of Church doctrine and the Gospels. 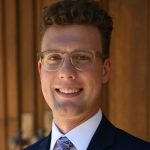 “This rich history of the Church’s social teaching is a gift — a treasury,” Mingus continued. “We have to make sure that we are well formed and that we continue to learn about what the Church teaches us.”

Mingus recently spent a week in Washington, D.C., doing exactly that. Along with a small group of lay and religious leaders from across the country, Mingus immersed himself in Catholic social teaching at a master’s-level course at the Catholic University of America. The program was sponsored by CAPP-USA, the U.S. affiliate of the Vatican-based organization established by Pope St. John Paul II to promote the knowledge and practice of Catholic social teaching.

CAPP — or Centesimus Annus Pro Pontifice — is named for the encyclical that Pope John Paul II wrote in 1991, “Centesimus Annus,” on the 100th anniversary of Pope Leo XIII’s influential encyclical.

“All of the principles of Catholic social teaching flow through each of the documents that the popes have written since the late 1800s, and they build off of one another in a really beautiful way,” Mingus said. “This tradition continues with Pope Francis, and it will continue with the next pope.”

Earlier this year, Mingus and Espada hosted a series of educational webinars about “Laudato Si’, On Care for Our Common Home,” the groundbreaking encyclical by Pope Francis concerning stewardship of the environment.

Mingus said that this effort may lead to a “once-a-year dive” by the ICC into other key areas of Catholic social teaching, including the dignity and sanctity of human life, which he calls “transcendent.”

“I returned from Washington with many new ideas for how to communicate these central teachings and apply them to everything we do,” Mingus said. “I look forward to working with Angela on bringing these ideas to fruition in the new year and beyond.”

For more information about the ICC, visit www.indianacc.org. This website includes access to I-CAN, the Indiana Catholic Action Network, which offers the Church’s position on key issues. Those who sign up for I-CAN receive alerts on important legislation and ways to contact their elected representatives.