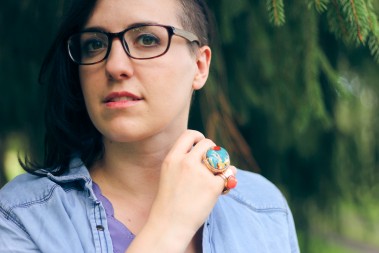 WASHINGTON (CNS) — Singer-songwriter Audrey Assad seeks to bring a message of Pope Francis about building bridges to the music business.

“Paul is a pontifex, a builder of bridges,” the pope said at a Mass last May.” He doesn’t want to become a builder of walls. … This is the attitude of Paul in Athens: Build a bridge to their heart, in order then to take another step and announce Jesus Christ.”

“As a musician, a unique way I live that out, being Catholic in an industry full of evangelicals and Protestants,” Assad said, is to “establish bridges … (to) be Catholic in the presence of people (who have) never encountered a Catholic before.”

Assad will perform at St. Vincent de Paul Parish, Fort Wayne, on Thursday, Oct. 24. Doors open at 6:15 p.m., and the concert is at 7 p.m. in the main body of the church. Admission is free, but the parish is asking for a donation to the St. Vincent de Paul Food Pantry. They are asking specifically for bar soap, shampoo/conditioner, peanut butter and jelly, and pasta and noodles.

A New Jersey native, Assad grew up in a Christian Plymouth Brethren home and never encountered a Catholic until she was 21. Then she met a high school student who changed her life.

A Catholic involved in LifeTeen ministries, he knew his faith really well, and he “asked me questions that challenged my faith,” Assad recalled. She said she was already considering entering the Catholic Church because she liked the reverence and the incense, but that his words really challenged her to come to a deeper understanding of her faith.

She became a Catholic in 2007, realizing that the “sacraments were real and I needed them, and that the only place to really get them was in a Catholic Church,” she told Catholic News Service in a telephone interview.

Both of her parents came to her Confirmation, and she describes them as being supportive of her decision after they had seen her growing in her faith for two years.

Assad, whose mother is musically inclined, started playing piano at age 2. After attending college for a few months, she left and supported her musical career with odd jobs for several years before moving to Nashville, Tenn., at the promising age of 24 with $7,000 she had raised for the venture.

She said she was just putting it all out there and then seeing what happened. She thought, “This is the time. I’m not married. I feel this was obedience” to God’s plan.

“One afternoon me and my roommate … (were) looking under couches for quarters to go eat at Wendy’s,” she recalled, explaining that she often rolled change because she just wasn’t making enough money to eat.

“I trusted that God will provide and he did over and over,” she told CNS. “I just held on and believed that God had called me to it.”

“All my pride, you know it doesn’t stand a chance against the way you move. You’re tearing up roots and breaking down walls,” she writes in a song titled, “The Way You Move.”

After working at a record company for several years, she spent some time going on tour with Matt Maher, Chris Tomlin, Jars of Clay, Tenth Avenue North, Michael W. Smith and many other Christian artists. Over time, the now 29-year-old has cut several albums and built a reputation for herself in the music industry. Her husband, William Price III, is her publicist.

A big fan of the teaching and mystical insights of Blessed John Paul II, Assad takes composing lyrics and music of her songs quite seriously.

“I don’t want to just write what I’m feeling,” she said. “Am I feeling desolate, joyful? Now let me read some Scriptures and teachings so I can write a song that is helpful to people, (and) not just me venting,” she said, describing her music ministry as “pastoral.”

“These songs are true to the teachings of the Church … with richness of orthodoxy,” she said. At the same time, though, she gives a huge effort to making them artistically beautiful because the “Church deserves my best work,” she said.

“The truth does not change according to our ability to stomach it,” Flannery O’Connor once said.

O’Connor, a Southern Catholic writer from the 1950s and ‘60s, is one of Assad’s literary favorites. An avid reader, the singer-songwriter is on a mission to encourage people to read and write.

She says her current favorite books are “Anna Karenina” by Tolstoy and anything by Jane Austen.

Asked about a book popular with young people right now, she commented: “I hate ‘Twilight.’” She was referring to the series of young-adult vampire-romance novels that have been made into a series of movies.

“I don’t have a problem with fantasy. I like zombie shows. I’m not … against those things, but I think I just don’t like the idea that teenagers are reading things that aren’t challenging to read. ‘Twilight’ sells them short on what their brains are capable of taking,” she said.

Assad draws much of her inspiration for her music from just living life.

“I’ve never been a musician who sits down” and plays a lot because “I have to be in a certain headspace to really feel the desire to do that,” she explained. “I like to read or cook and then if I’m writing, then I’m writing.”

Musically, she is “super-influenced” by Paul Simon.

“He’s just not selfish about performing. He sees it as an exchange between himself and the audience,” she said. “When I go to a place and sing, that is an experience we’re all having together,” she added, explaining that her concerts are not the same every night.

Among her other inspirations is the English poet-priest Jesuit Father Gerard Manley Hopkins (1844-1889). “For Christ plays in 10,000 places,” the priest once wrote in his poem “As Kingfishers Catch Fire.”

“To the Father through the features of men’s faces,” he said. That inspired Assad to write the song “For Love of You”:

“You live in a million places. Your fingerprints can be seen on a million faces. There is a trace of you in every hallelujah. Every song that I sing.”