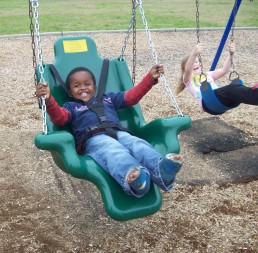 Brontavious Coleman enjoys the new swing donated by Mishawaka Catholic students and installed recently at Beardsley Elementary School in Elkhart. Coleman has physical disabilities stemming from Dandy Walker Syndrome that keep him from walking and from playing on playground equipment with his classmates during recess.

ELKHART — A friendship between one Mishawaka Catholic Schools teacher and her public school counterpart has enabled a physically handicapped student to swing through the air next to his classmates.

Felix’s and Whitfield’s classes have corresponded with each other for several years as pen pals. Earlier this year Whitfield’s students even enjoyed a virtual visit from Felix’s. Whitfield said she also keeps Beardsley students in mind when the opportunity arises to act as Christ to others by way of school or classroom service projects.

In observance of Catholic Schools Week in January, Whitfield gave consideration to a new idea from Felix.

“She’s always said there’s a great need. She talked about it with students here, regarding how it’s different for kids there — how they don’t always have food at home, or enough clothes to wear when it’s cold,” Whitfield said. So, at first, Whitfield’s class discussed raising money to make blankets. But then the talk turned to one of Felix’s students, seven-year-old Brontavious Coleman, who has physical disabilities stemming from Dandy Walker Syndrome that keep him from walking and from playing on playground equipment with his classmates during recess.

The St. Bavo campus Mishawaka Catholic Schools first graders held a one-day “Change for Change” campaign during Catholic Schools Week and raised enough money for Beardsley to order a special swing that Coleman can be fastened into to swing on the school’s playground. Last month, they traveled to Beardsley to present the money and to meet their pen pals and Coleman.

“The Beardsley kids were just as glad as we were when I walked in with a big (cardboard) check,” Whitfield said. “That was nice for my kids to see, too.”

“Fundamental to our Catholic Schools is the idea of service to community,” Principal Vickki Wojcik said. “We wanted our children to follow the role of Jesus in the world. Part of the hope is that they’ll realize they can make the world a better place.”

After spending time with Coleman and his classmates, Whitfield said her students are hoping for the opportunity to return to Beardsley now that the swing has come and will be installed soon. They’d like to see Coleman have the opportunity to trade in his wheelchair for some air under his feet.

Whitfield said the young man smiled a great deal during their visit, and thanked them for their gift. “He seemed so happy to have them there. Really, all the kids did,” she said.