Immigrants and immigration reform have been the focus this week during prayer vigils attended by over 600 Franciscan men and women throughout Indiana.

The Franciscans of Indiana, who minister in over 80 parishes, schools and health care facilities, are also signing post cards which will be sent to their U.S. representatives as well as to Sena-tors Richard Lugar and Evan Bayh. The cards ask legislators to support comprehensive immigration reform.
National Migration week was designated by the Catholic Church to call attention to people forced from their homes and displaced because of war, natural disasters, climate change and economic necessity.

“The Christian God is a God of immigrants, indeed an Immigrant God,” said Franciscan Brother Bill Short, theologian and historian from the Franciscan School of Theology in Berkeley, Calif. “[St.] Francis often reminded his followers of the biblical injunction that we are ‘aliens and exiles, pilgrims and strangers’ on earth.”

Franciscan Sister Jane McConnell is a chaplain at St. Mary’s Medical Center in Evansville. This Monday she joined fellow Franciscan Sisters and lay associates at a prayer service designed to “raise our awareness of our migrant brothers and sisters among us.”

The Monastery of St. Clare is located on the southwest side of Vanderburgh County. Sister Jeanne Maffet serves as the prioress there. She said the Poor Clare sisters were also praying for immigrants and immigration reform this week.

Restrictions at Masses due to H1N1 removed in diocese

The local health department has acknowledged a decrease of confirmed cases in our area, said Matthew Miller, director of the diocesan office of worship. “Therefore the previous restrictions on offering the Sign of Peace and Communion from the chalice have been removed.”

Miller communicated the removal of restrictions in an email message entitled “H1N1 Flu Instructions Update for January” to parish and school leaders Jan. 4.

“The understood practice of the diocese is that Communion from the chalice may be offered at any Mass where it can be done in an orderly and reverent manner,” he went on to say. “The invitation for the Sign of Peace may be extended once again in the usual way.”
While removing the restrictions, which had been in place since the fall, Miller asked for consideration and common sense “if there is some concern of sickness.”

MERRILLVILLE — For a few hours Jan. 7, the great hall in the Pastoral Center was filled with the colors, sounds, and aroma of a Kwanzaa celebration. Several days after Ss. Monica and Luke observed its 23rd annual Kwanzaa, Pearlette Springer, director of the Office of African American Ministries, brought the celebration to the diocesan staff. Springer provided background information and images of the African American observance, along with food and music.

“It’s educational, formation,” said Springer, who had done similar Kwanzaa programs several years ago and who decided to bring the program back. “We fear what we don’t know.”

Among the foods Springer brought was sweet potato pie. She recalled bringing the pie to a Pastoral Center potluck years ago, only to see people afraid of the unfamiliar food.

“Normally,” Springer said, “the karamu table would include produce to represent the first fruits, including corn on the cob, symbolic of children yet to come.”

Another important symbol is water, or the libation. Springer explained that water would be poured into a vessel made from the ground and then poured into something else from the earth, e.g., a plant or another vessel. Water is a sign of life, Springer said, and the libation ceremony calls forth ancestors to celebrate with the living. Following the ceremony, the water is thrown into the ground to send back those ancestors.

During the karamu, or feast, Springer displayed symbols of Kwanzaa, including candles in African colors of black, green, and red. Each candle represented one of the seven principles of Kwanzaa, which Springer ties into the pillars of Catholic social teaching.

Father Jonathan Meyer, the pastor of St. Anne and St. Joseph parishes in Jennings County and St. Mary Parish in North Vernon, said several thieves apparently used a crowbar to force open a steel side door secured with a deadbolt lock sometime after dark on Dec. 27 or in the early morning hours of Dec. 28.

During a phone interview on Jan. 4, he said the wood floor was scarred when the thieves dragged the heavy safe from the sacristy, across the sanctuary, down the main aisle and out the front doors.

He said three damaged antique gold chalices, two monstrances, two ciboriums, two Communion patens and other liturgical items were recovered by the Jennings County Sheriff’s Department on Dec. 31, and the broken safe was found in a river.

At press time, arrest warrants were pending for three suspects.

Father Meyer expressed gratitude that the recently restored 143-year-old church was not vandalized during the break-in, and sorrow because the sacred vessels used during liturgies for many years were badly damaged, possibly beyond repair.

Father Meyer said the thieves sold some of the damaged vessels to a man for $14, who sold them to a store owner for $70. The store owner contacted the sheriff’s department. Other vessels were sold as scrap metal for $17.80.

“Desecrated is the best word to use,” he said. “A lot of the vessels had the names of donors [inscribed on them], and [the thieves] took some sort of tool and scratched the names off so the chalices wouldn’t be traceable. Everything is disassembled. Everything is in pieces. All the chalices have been broken apart. They took metal cutters to the monstrances and cut open the base of the principal chalice. 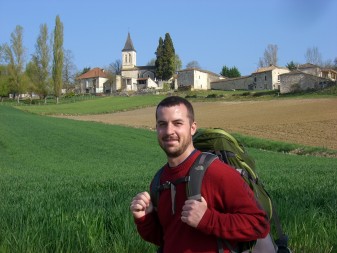 Finding Christ on ‘The Way’: Seminarian grows in faith on centuries-old pilgrimage

But this was no ordinary spiritual journey that his fellow seminarians or any other Catholic might take.

Boehm walked 850 miles in the footsteps of countless pilgrims who have taken similar routes for the past 1,000 years to the Spanish shrine of Santiago de Compostela—on the western tip of Europe—that tradition holds is the resting place of St. James.

From his starting point in southern France, Boehm experienced many physical and spiritual crosses along the way.
He was hobbled by an ankle that swelled up to twice its normal size.

He walked with many pilgrims who were dismissive of the very notion of believing in God and in becoming a priest.
And he walked over the rugged Pyrenees Mountains in fierce late winter weather.

Such challenges of pilgrimages, along with the many blessings that come with them, have made them an important part of the Christian faith since the earliest days of the Church. The ups and downs of a pilgrimage correspond powerfully to the journey of faith to heaven that all believers make over the course of their lives.

This meaning is so profound that the journey to Santiago de Compostela has come to be called in Spanish the “Camino” or, as it would be rendered in English, “the Way.”

Boehm began his pilgrimage on March 21 and completed it on May 31, Pentecost Sunday.

He did this during a year when he took off from his studies at Saint Meinrad School of Theology in St. Meinrad, where he is currently in the third of his four years of priestly formation.

Photo caption: Seminarian Dustin Boehm hikes on April 9, 2009, in southern France on his way to Santiago de Compostela at the western tip of Spain. He walked 850 miles to the shrine to which pilgrims have journeyed for more than 1,000 years. (Submitted photo)

(For these stories and more news from the Archdiocese of Indianapolis, log on to the website of The Criterion at www.CriterionOnline.com)

MUNCIE — Bishop William L. Higi came to St. Mary Parish on Dec. 31 to confer ministries upon seven of the Local Church’s 30 seminarians and to celebrate the solemnity of Mary, the Mother of God.

Taking the next step on the journey to priesthood, Sam Futral, Thomas Haan, Kevin Hurley and Clayton Thompson were installed as lectors and Adam Kerrigan, Dominic Petan and Travis Stephens were installed as acolytes.

In his homily at the vigil Mass, Bishop Higi focused on the Blessed Mother as a model for all. “At the Annunciation, you know the angel greeted her (with the words) ‘Be not afraid.’ … Our goal in life can never be close to the role of the Blessed Mother. But like her, we need not be afraid; if like her, we put our trust in God the Father, Son and Holy Spirit.

Looking at Mary, our spiritual mother, he said, we see “God who is gentle and tender and who loves us passionately.

“The reading from the Book of Numbers (6:22-27) … tells us God is about blessings. God wants to be gracious to us, … look upon us with kindness, … and give us his peace.

“The presence of Mary, center stage this evening, is a sign to all of us that we should be confident, hopeful, joyous, no matter what the future may hold for us.”

A dinner, sponsored by the parish’s Women’s Association, was held after Mass in Noll Hall. Association president Terry Avila coordinated the reception.

FISHERS — Every religious vocation starts somewhere. The seed can be planted by a book, a movie or a sermon. Other vocations can be traced to the example set by a favorite pope, bishop, priest or nun.

Steve and Joni Abdalla, of Fishers, co-founders of Wee Believers Catholic Toy Company, know that exposure to religious toys can play a role, too.
In 2009, they introduced their first product for kids, a set of plush altar vessels called “My First Mass Kit,” that retails for $89.99. Now — during the Year for Priests — they’re marketing their first two “vocation dolls,” Father Juan Pablo and Sister Mary Clara.

The mission of Wee Believers is to create and market “authentically Catholic” toys, dolls, sacramental gifts and seasonal items that “enkindle the fire of faith in families,” Joni said.

“The Holy Spirit hit us in the face with it,” Steve said. “We really approached this from a parenting standpoint, to help parents have better tools to raise their kids, but it’s also a powerful vocations tool. To even have the most tangential effect on somebody’s vocation is humbling.”

The Abdallas and their four young children attend Our Lady of the Most Holy Rosary Church in Indianapolis.

They decided to develop their own toy line after watching children fidget during Mass. They searched for faith-related toys to keep their own children occupied, but often came home disappointed.

“We had our own children in church, so we knew that the art of keeping a young child quiet in church is distracting,” Joni said. ‘Something faith-related was needed to keep them distracted with.”

The concept of a Mass kit seemed to be a good one, she said, and it meshed with Steve’s goal of running his own business. He has an MBA from the University of Notre Dame, and now works full-time for Wee Believers.

(For these stories and more news from the Diocese of Lafayette, log on to the website of The Catholic Moment at www.thecatholicmoment.org) †