WASHINGTON (CNS) — As U.S. Catholic leaders grappled with the enormity of the April 15 fire that ruined the Notre Dame Cathedral in Paris, the word “iconic” came to mind for many of them.

“Our prayers are with the people of Paris as the iconic Notre Dame Cathedral is burning,” said an April 15 statement by Archbishop Alexander K. Sample of Portland, Oregon; the blaze was put out after nine hours.

“As we enter this most Holy Week of the year in preparation of Easter,” he added, “we rest in the peace of the resurrection and know Christ will console us in our most tragic times.”

Cardinal Timothy M. Dolan of New York, in an April 16 appearance on NBC’s “Today” show, said Notre Dame has “become an icon not only of faith … it’s also an icon of art, poetry, literature, French pride and gratitude, French identity. … It really is an icon for what’s best in human nature.”

He said of the fire, “There does seem to be a death in the family … and not just the Catholic family, the world family. … It’s almost like we are at a funeral parlor. We are seeing a loved one who has died.”

“Notre Dame has been an iconic house of worship for over 850 years and a prayer destination for faithful Catholics of Paris and from around the world,” said an April 16 statement from Bishop Nicholas DiMarzio of Brooklyn, New York.

“We give thanks to God for the firefighters who so bravely battled the devastating fire. And we look toward the future as this great Cathedral of Notre Dame is rebuilt.”

“Notre Dame has been one of the most iconic churches in Christendom — a testament to man’s desire to glorify God on earth and a beacon of hope for millions of pilgrims each year,” said an April 15 statement by Archbishop Charles J. Chaput of Philadelphia. “The ongoing destruction being wrought by flames is doubly sorrowful as it comes during the holiest week of the Christian calendar.”

Archbishop Chaput added his prayers “that our Lord will bring comfort and peace to Archbishop Michael Aupetit (of Paris) as well as our brothers and sisters in the Archdiocese of Paris, and the people of France at this time. In the face of desolation and devastation, we find hope in the Resurrection.”

“Notre Dame Cathedral is more than a church — it’s a worldwide iconic symbol of our Catholic faith,” said an April 15 statement by Bishop Thomas J. Paprocki of Springfield, Illinois. “My thoughts and prayers are with Catholics around the world who love Notre Dame Cathedral and have lasting memories there, the people of France, and the first responders.”

The Basilica of the National Shrine of the Immaculate Conception announced April 15 the creation of a website, www.supportnotredame.org, where people could contribute money for Notre Dame’s rebuilding.

The national shrine, in a statement, “encourages those whose lives have been touched by this iconic cathedral, to support the effort to resurrect and rebuild this church which has touched the hearts and souls of the world.”

“Our hearts are with the firefighters and with the caretakers of the magnificent Cathedral of Notre Dame de Paris, said Archbishop Robert J. Carlson of St. Louis in an April 15 statement. “We ask for the intercession of Mary, Mother of God, and look to the promise of Easter hope and new life in the midst of this difficult loss,” he added.

The archdiocese has experienced cathedral problems of its own, though not nearly as severe as the Notre Dame fire. The Basilica of St. Louis, popularly known as “The Old Cathedral,” was closed following the April 12-14 windstorms that swept through the country’s midsection. Work on a permanent underlayment for a new roof began April 15, but all services there are canceled until the safety of the ceiling is secured.

“I join in the great sadness felt around the world over the fire at Notre Dame Cathedral in France,” tweeted Bishop Edward J. Burns of Dallas April 15. “While we mourn the damage done, we are grateful there has been no loss of life.”

Archbishop William E. Lori of Baltimore, in announcing the archdiocesan chrism Mass for April 16, invited “Catholics and people of all faiths” to “pray in solidarity with the people of the Archdiocese of Paris and all of France” in light of the cathedral fire. 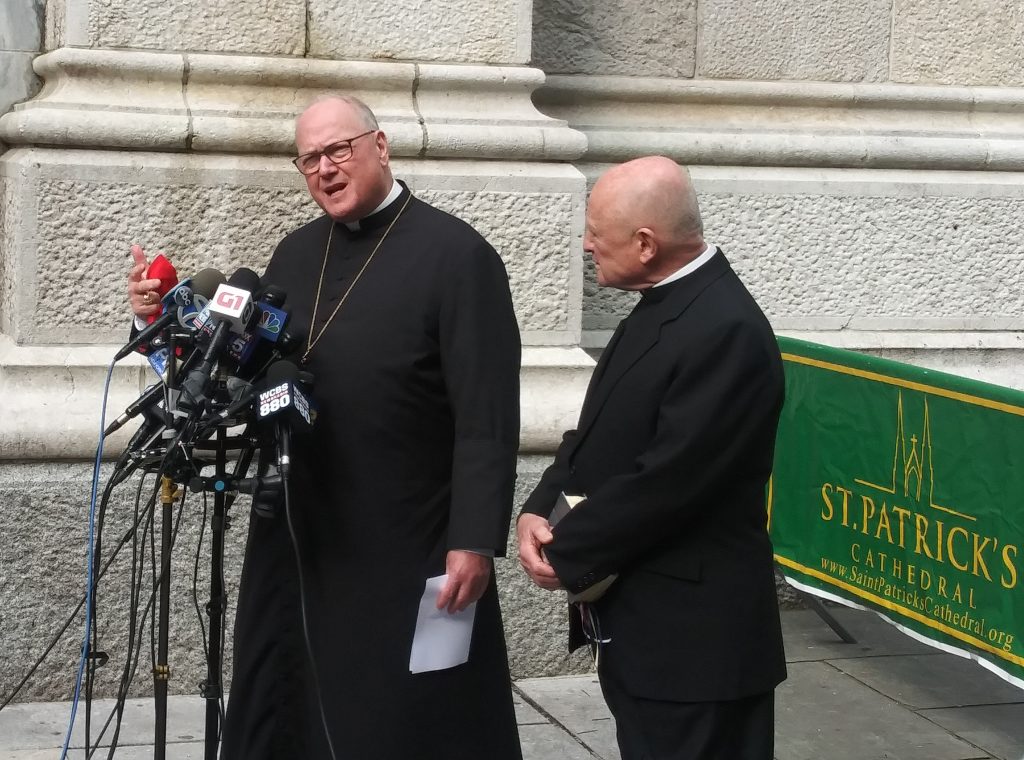 In Atlanta, Archbishop Wilton D. Gregory said, “Paris would not be Paris without Notre Dame.” He said Catholics of the archdiocese sent their prayers “and closeness in faith” to their brothers and sisters in France. “May the Lord’s passion, death and resurrection strengthen them as we celebrate these mysteries this week,” he said.

In Los Angeles, Archbishop Jose H. Gomez said Catholics there joined the world in mourning the devastation of Notre Dame and added: “These days reminds us that a church is not just a building of stone and wood, marble and glass. It is a temple to the living God, where God is present and comes to dwell with us, a place where we praise him and devote our lives to him in love.”

Bishop R. Walker Nickless of Sioux City, Iowa, on behalf of the faithful of the diocese expressed “profound sadness at the fire.” “Even here in Iowa, many of us have visited and prayed in this magnificent church named after our lady, the Mother of God,” the bishop posted on Facebook. “The destruction of such a notable piece of our shared Catholic heritage affects all of us.”

“My heart is sad, but I know it will be built up again on whatever remains of the original,” said Mary Brandt, a parishioner at St. Mary Church in Spirit Lake, Iowa. She visited Notre Dame in November with her sister Catie Becker Ehlert.

“It’s how Christianity has survived all over the world, building again and again on what has fallen,” Brandt told The Catholic Globe, newspaper of the Sioux City diocese.

Francois Decoster, mayor of Saint-Omer in northern France — about three hours by car from Paris — and vice president for culture of the Hauts-de-France region, was scheduled to leave Maryland for France April 15. He and other officials had been in Baltimore and Washington for concerts by the 70-piece Saint-Omer Wind Orchestra to celebrate three centuries of cooperation between France and the U.S.

“It’s really a tragedy,” Decoster told the Catholic Review, media outlet of the Archdiocese of Baltimore, April 15 before returning to France. “The images are really terrifying.”

He added, “The French people and people all over the world are watching this. They see this burning.”

Noting that he and his associates had been in the U.S. to celebrate the shared history between France and the United States, Decoster said, “Our history, of course, shares the history of Paris. The Carroll family knew the capital city.” John Carroll, the first U.S. bishop, studied in Saint-Omer.

“At the same time, this tells us how important the patrimony is to the people,” he said of Paris’ heritage and culture. Notre Dame is especially important to these as a spiritual site and a site for visitors.

“The cathedral has welcomed so many historical events,” Decoster said, mentioning how so many events have marked the ends of wars, important funerals, coronations and other significant occasions.

“It’s an architecture that every person in Paris knows as part of every day. It’s a building really present in our lives,” Decoster said. “It’s amazing to think that this building may vanish.”

Carl Anderson, CEO of the Knights of Columbus, said in a message posted on the organization’s website that “the image of this burning cathedral seemed in a way to symbolize the devastation so many Catholics have felt as our church has been rocked     by one crisis after another.”

“Fires have destroyed great cathedrals before, and they have been rebuilt. So let us hope this will be true again,” he said. “But not only this church. Let us resolve to patiently ‘rebuild’ the Church, not with granite and mortar, but with living stones in the spirit of those earlier builders — with humility, penance and with gratitude for the miracle that God is still performing before our eyes.”

Anderson concluded, “Let us do so with confidence in Mary, who ‘at that moment when everything collapsed’ does not hesitate to intervene for us.”

Contributing to this story was Christopher Gunty in Baltimore.