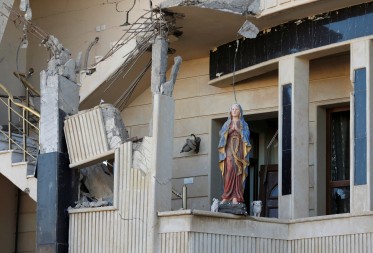 By Catholic News Service
BALTIMORE (CNS) — The head of Catholic Relief Services and the chairmen of two U.S. bishops’ committees have urged congressional leaders to approve additional funding for humanitarian relief and recovery operations as part of a comprehensive budget measure for fiscal 2017.
The Catholic leaders wrote a letter Nov. 28 in support of a request by the Obama administration for Overseas Contingency Operations funds to address the growing needs of those forced to flee their homes because of natural disasters around the world or as a result of the ongoing fight against Islamic State militants.
They urged action before the Dec. 9 deadline that Congress faces on the federal budget. The government is funded through that date because of a continuing resolution the House passed — and President Barack Obama signed — at the end of September to avoid a government shutdown.
“More than 50,000 people have already fled Mosul, joining the approximately 3.3 million Iraqis who have been internally displaced since ISIS began occupying parts of Iraq in 2014,” stated the letter, released by Baltimore-based CRS Nov. 29. “(We) believe that as the world’s wealthiest nation, we have an obligation to help the innocent who fall victim to war, to protect the marginalized and to lift people out of poverty.”
It was signed by Carolyn Woo, outgoing president and CEO of CRS, the U.S. bishops’ overseas relief and development agency; Bishop Joe S. Vasquez of Austin, Texas, chairman of the U.S. Conference of Catholic Bishops’ Committee on Migration; and Bishop Oscar Cantu of Las Cruces, New Mexico, chairman of the USCCB Committee on International Justice and Peace.
Addressing the House and Senate Subcommittees on State, Foreign Operations and Related Programs, the Catholic leaders also pointed to increased suffering in other places besides Iraq, such as Southern Africa, which is suffering a severe drought.
They also named South Sudan, the Central African Republic and the Lake Chad Basin, a region that comprises parts of Cameroon, Chad, Niger and Nigeria. Ongoing violence and military conflicts in those places have displaced whole populations and exacerbated food insecurity, resulting in acute malnourishment for many. According to a recent report from the U.S. Agency for International Development, an estimated 9.2 million people, primarily in northeastern Nigeria, require humanitarian assistance.
Additional funding from Congress, the Catholic leaders said, will help ensure CRS can continue to respond “to crises like these that don’t make the headlines.”

A damaged statue of Mary is seen in a church in Qaraqosh, Iraq, Nov. 25. (CNS photo/Goran Tomasevic, Reuters)

They acknowledged Congress’ “steadfast commitments to humanitarian and development needs around the globe” and urged lawmakers to incorporate the administration’s amendment request for humanitarian relief and recovery activities” in their final appropriations bill.
September’s short-term measure included full funding for military construction and Veterans Affairs for the new fiscal year, but left undecided were 11 remaining annual appropriations bills for various federal agencies.
Woo and Bishops Vasquez and Cantu praised the current proposals before Congress for funding “key humanitarian accounts” — $3.2 billion for Migration and Refugee Assistance; $2.8 billion for International Disaster Assistance; $1.6 billion for Food for Peace; and $60 million for Emergency Refugee and Migrant Assistance.
But they urged Congress also appropriate new Overseas Contingency Operations funds. The Obama administration has requested $14.9 billion.
“We urge you to respond generously to the administration’s request of Nov. 11 for additional humanitarian and recovery assistance,” they wrote.
“As we have already learned in Iraq, individuals, communities, and countries divided by war face significant challenges amidst their suffering,” Woo and the bishops continued. “They must rebuild their communities, and establish inclusive governance that protects majorities and minorities.
“We must provide them with humanitarian help and durable solutions to their plight because it’s the right thing to do, and because their security and prosperity is critical to the stability of the entire region,” they added.