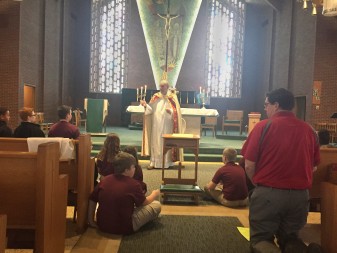 When people think of Catholic schools, one of the qualities they often attribute to them is an education that surpasses what is offered in local public schools. Yet, that, while certainly a goal, it is not the extent of what it means to send a child to a Catholic school.

At the core of Catholic education is something that reaches farther than the academic rigor of reading, writing and arithmetic. It encompasses life-long learning: teaching children about morality, living a virtuous life and striving to love and serve Jesus in all that they do. Among the Catholic schools of the Diocese of Fort Wayne-South Bend are two that incorporate truly remarkable programs that instill those values and virtues so often lacking in a public education.

St. Anthony de Padua School, South Bend, has been running an after school Eucharistic Adoration Club for its elementary students. First-grade teacher Betsy Williams explained how it all began.

“I took my first graders to the church once a week to pray the rosary for Bishop Rhoades and our pastor, Father Dave Ruppert. Afterward, I got so many hugs and thanks from the kids for taking them to pray in church. They felt a peace that comes from quietly sitting with Jesus and looked forward to the rosary all week. I told them they were resting in His presence.”

Shortly thereafter, an idea struck Williams.  She saw how her students responded to being in the quiet church and she imagined what a gift it would be to start a Eucharistic Adoration Club. Once the idea was approved by both the pastor and principal, four children began regularly attending after school. “We meet on the first and third Thursday of every month,” Williams said.  “The students come to my classroom for a snack and we talk about the saints, Adoration and practice songs to sing during Adoration. Then we process to the church at 3:30 and pray for 45 minutes.”

In only one year the club has grown from four students to 30 who attend nearly every meeting. These include children from every grade, and they even have a preschooler who attends.  William’s aspiration is to eventually offer an evening Holy Hour for parents and their children.

Third-grader Sophia said, “I like [Adoration] because it is fun and we pray for those we love.”  Brynn, a first-grade student, added, “I go because I want to spend time with Jesus. I am glad I joined. I like saying the rosary.”

Another enriching way that St. Adalbert has chosen to develop its Catholic identity is through a student housing program, which is unique to its roots in the Holy Cross Congregation. Principal Andrew Courier explained, “Although St. Adalbert was founded as a diocesan parish, our parish is now staffed by Holy Cross priests. The Congregation of Holy Cross offers us rich opportunities to reach the children on a faith level, especially in the area of vocations.”

One such way is through the housing system, which dates back to church tradition in England, France and Ireland. “When religious orders, especially the Benedictine monks, operated schools, students were assigned boarding houses and thus competed on many levels according to their residential assignments,” Courier elaborated. St. Adalbert has four houses on its premises, each named after a Holy Cross saint or spiritual leader.

Each fourth-grade student is assigned to one of the four houses during a selection ceremony that includes songs, dances and other traditions. The new entrants at the Corby House ring a bell once owned by Father William Corby himself. Each house meets on a monthly basis with school staff, and the adults help the student] set goals and learn new virtues.

Catholic identity is so important in the schools of the diocese, concurred Williams and Andrew. “Nothing in life is more important than forming a relationship with Jesus,” said Williams. “If they learn this, it’s what will sustain them throughout their lives. It creates a life of meaning, and they will have the peace that only Jesus can give.” Courier added, “An encroaching secularism in today’s society makes it critical for Catholic school leaders and teachers to ensure that the Faith is passed on to the children. We open the doors in the morning … by beginning with a Gospel reading. Catholic schools need to be the place where children encounter Christ through the sacraments.”