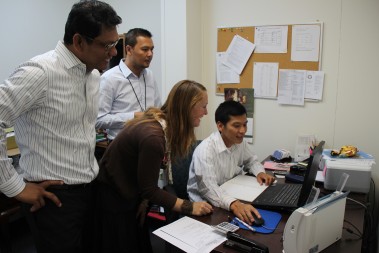 Nyein Chan, director of Resettlement, left, works with refugee case managers Cho Too, in back, and Karen Bender, center, and health advocate Thawng Takkon at Catholic Charities in Fort Wayne.

FORT WAYNE — Catholic Charities celebrates its 90th anniversary this year as a mission-driven organization that serves the poor and vulnerable regardless of religion, ethnic background, age, gender or ability to pay. As an agency of the diocese, Catholic Charities’ programs are operated in conformity with Catholic social and moral teachings and, though a separate corporation, operates at the pleasure of the bishop, who serves as chairman of the board.

Over the past nine decades the agency has undergone countless changes, all to meet the changing needs of the community. Currently Catholic Charities, a state licensed, COA accredited social services agency, employs over 50 employees and hundreds of volunteers to staff the plethora of service programs available in 14 counties in Northeast Indiana that comprise the Diocese of Fort Wayne-South Bend.

Debbie Schmidt oversees the workings of this organization so vital to the life of the Church and the local community. Executive director since 2002, she says Catholic Charities’ client base is “very diverse,” and includes the poor, disabled, migrants, elderly and children. 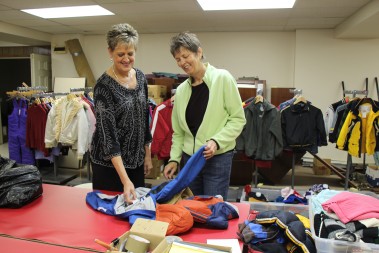 Director of Community Relations and long-time board member Kathy Denice is passionate about the dedicated staff and mission of the agency and says, “We are the social services arm of the Catholic Church. Our mission is to serve others as Christ would have us do.” And to continue their service education is the key. Denice says, “My goal is to educate the community on the charitable works of Catholic Charities.”

The many programs and services provided by Catholic Charities are supported through a diverse range of funding including through the Church, the government, the United Way and of course, private donations. Ninety-one percent of the funds go directly to client services, with the remaining 9 percent supporting administrative costs. Schmidt says, “We do the best with the resources we have to serves the needs.”

1924  Associated Catholic Charities was one of 19 original members of the Community Chest now known as the United Way.

1930-39    The Great Depression saw many changes both for the community and for Catholic Charities, who continued to provide children with milk, schoolbooks and supplies.

1941-45    Catholic Charities assisted families of veterans, displaced persons and participated in a community-wide childcare center to meet the needs of working mothers.

1961 Resettlement program was established in Fort Wayne to meet the needs of refugees from Cuba.

1964  Plans were developed for Saint Anne Home, a nursing care facility for the elderly.

1967 The first resident was admitted to Saint Anne Home. The Ten-O-Four Home for unwed mothers was established for pregnant girls.

1970 An Independent Living Unit was established at Saint Anne Home.

1974 A component of Harvest House, the Forever Learning Institute, was established.

1975  The Refugee Resettlement program was established with staff persons in both Fort Wayne and South Bend to meet the needs of South Vietnamese refugees.

1976 Villa of the Woods in Fort Wayne and Vincent House, in Elkhart were opened as congregate living facilities.

1978 The Head Start program was established.

1982 A Catholic Social Service office was opened in Elkhart.

1985 The Home Visitor Program to provide support for homebound elderly and disabled was established.

1990 The agency announced a restructuring of its administration whereby all services and programs operated from one administrative structure.

1993 Catholic Charities was chosen as a site for the resettlement of refugees from Bosnia.

1994 Adoption program expanded to include children with special needs. Services to adult adoptees seeking information about their birth parents were also offered. Project Rachel was established.

1996 Mentoring program for pregnant and parenting young women, “Birthing the Vision” was established.

2001 A groundbreaking for the expansion and renovation of Villa of the Woods began. Immigration Program established and Match Grant Program begins under Refugee Services.

2006 Senior AIDES Program expanded to serve all 14 counties within the diocese.

2010   Catholic Charities was a partner with the City of Fort Wayne and competed for and won the All American City Award.

2011   The Office of Faith Based and Community Initiatives selected Catholic Charities to receive the Indiana Hardest Hit Fund Initiative Volunteer Service Program awards for Regions 2 and 3 (a total of 15 counties). This program is part of the Building Bridge to Recovery Foreclosure Prevention Program.