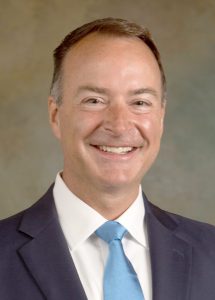 The Board of Directors of Catholic Charities of the Diocese of Fort Wayne-South Bend is pleased to announce the appointment of Daniel Florin as Chief Executive Officer, effective immediately. Florin has been serving as interim CEO since July 2021.

“Dan has been outstanding in his service as Interim CEO,” Bishop Kevin C. Rhoades said of the appointment. “I am most pleased that he will now continue as the permanent CEO. The service of the poor and needy is an essential part of the Church’s mission, and I have every confidence in Dan’s heart for the poor and his superb managerial skills to continue the growth of outreach of Catholic Charities in our diocese to the poor and needy.”

Florin comes to the position of CEO with extensive financial and business management experience. He served as chief financial officer of Biomet, Inc., from June 2007 until Zimmer’s acquisition of Biomet in June 2015, at which time Florin was named executive vice president and chief financial officer of Zimmer Biomet Inc. until his announced retirement in July 2019. Florin earned an accounting degree from the University of Notre Dame, and holds a CPA and MBA.

Florin left the corporate world two years ago “to focus on faith, family and to give back to the Church.” He then joined the board of Catholic Charities in 2020.

“I am humbled to have this opportunity to serve as CEO of Catholic Charities for the diocese, as we commemorate 100 years of serving all those in need as Christ would have us do,” said Florin. “Over the past seven months, I have seen firsthand the dedication of our team, as they walk alongside and provide support to the most vulnerable in our community.”

“On behalf of the Board of Directors, I am honored to have Dan lead Catholic Charities as CEO,” says Paulette Davis, president of the Catholic Charities board of directors. “Dan’s servant leadership, combined with his vast business experience will advance the mission of the agency well into the future.”

Dan and his wife Kelly have seven children and seven grandchildren and are parishioners of St. Pius X in Granger. Their son, Brian, is in 3rd year theology at Mount St. Mary’s Seminary in Emmitsburg, Maryland.

As interim CEO, Florin was already performing the full duties of the CEO, including aiding in the resettlement of refugees from Afghanistan, with Catholic Charities being the only agency in northeast Indiana providing this service.

Florin reports that Catholic Charities has also been seeing an influx of people seeking counseling services and plans to look at their staffing levels to possibly increase staff numbers to meet this need within the 14 counties that they serve. He also hopes to create partnerships with other agencies in the area to grow their outreach services and to “serve more people.”

For now, he hopes merely to bring “a sense of stability to the team” and to “serve clients with love and compassion as we’re called to do,” he said.

Catholic Charities will mark their 100-year anniversary this year and Florin looks forward to celebrating in proper style.