It was in 1922 when Bishop Herman J. Alerding saw a need for better organization of the Church’s charitable activities in the Diocese of Fort Wayne, which at that time covered the entire northern half of the state. So he established Associated Catholic Charities, which became known as Catholic Charities of the Diocese of Fort Wayne-South Bend. On Thursday, April 21, 2022, more than 100 people gathered to celebrate its centennial anniversary and to raise money to continue the works of the organization.

Bishop Kevin C. Rhoades walked guests through the history of the organization and the great social and economic challenges Bishop Alerding faced in establishing dozens of new parishes and schools in the “midst of anti-Catholic and anti-immigrant hostility,” while still being “deeply committed to the two dozen orphan asylums and other charitable works throughout the diocese.” 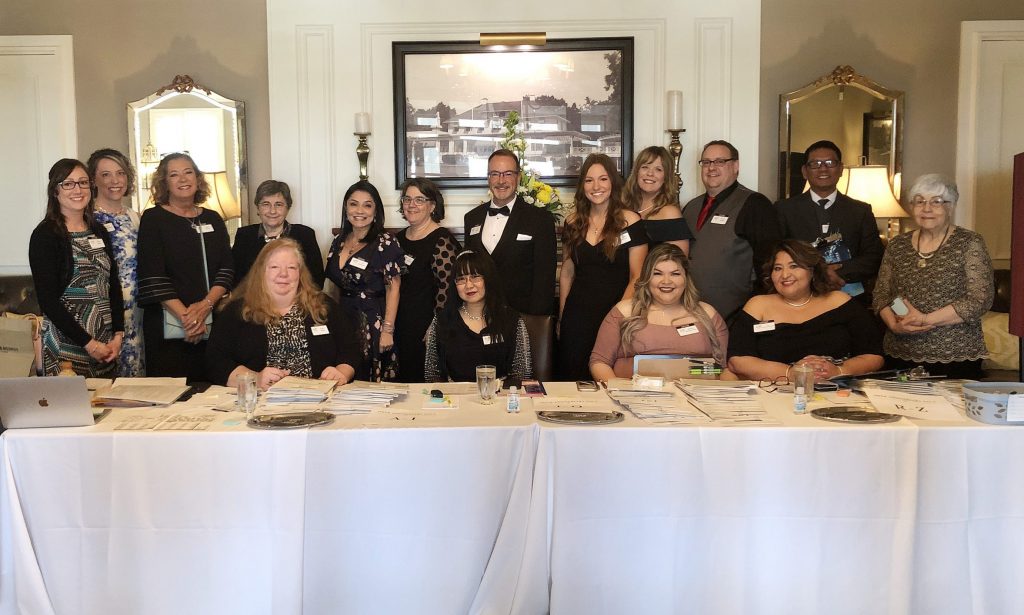 Photos provided by Nicole Kurut
Employees of Catholic Charities pose together at the 100th anniversary gala at the Fort Wayne Country Club.

Bishop Rhoades emphasized the need to remember the past while looking toward the next 100 years of service for Catholic Charities. “Through the past 100 years, Catholic Charities has grown and has adapted to the needs of society. I am struck, however, how many of the needs have been constant, including care for pregnant single mothers, care for immigrants and refugees, family counseling, and care of the elderly poor.” Bishop Rhoades also spoke of new needs in helping people with drug and alcohol addictions as he expressed his gratitude to all those who have supported and continue to support Catholic Charities. 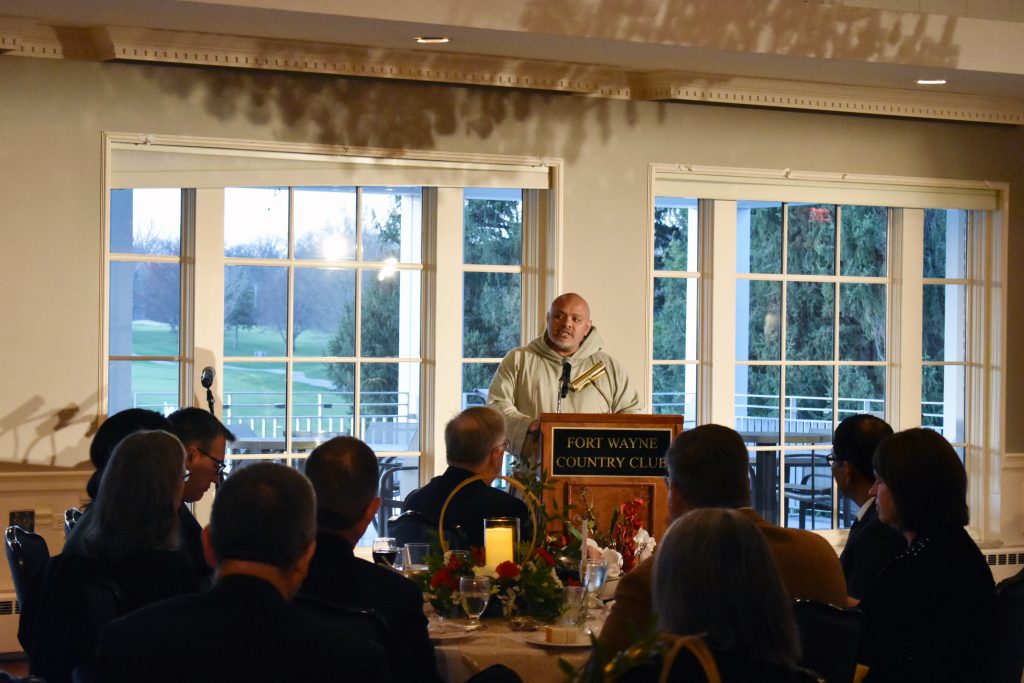 Keynote speaker Father Agustino Torres, CFR, speaks on the importance of charity of both time and money to aid “our brothers and sisters,” as Christ called on His followers to do.

Keynote speaker Father Agustino Torres, CFR, a priest with the Franciscan Friars of the Renewal, based in the Bronx, New York, told everyone in the audience that the Lord has plans for them. He said that in preparing for this speech, he felt that was the message the Lord had for him to share. Relating that to Catholic Charities and the contribution of its benefactors, he said, “The Lord has plans for you to prosper, and when we live in this way, my brothers and sisters, the act of giving to our brothers and sisters in need is just an extension of who we are, and if you’ve ever been on the other side of things, you know that you are really and truly grateful.”

He reminded the guests that the Eucharist would not have happened without charity. “The Last Supper happened because of benefaction, because people said yes to Jesus,” he said. “And you, my brothers and sisters are the ones saying yes to Jesus in this time, in this place, and in this diocese, and for that I say thank you, and for that, I say we still have a lot of work to do.”

Catholic Charities Chief Executive Officer Dan Florin closed the evening by sharing his story of recently being named permanent CEO after serving as interim CEO, and why he accepted the position. Florin had spent more than 30 years in corporate America, “climbing the ladder to reach financial independence,” he shared. When he and his family moved to Indiana in 2007, he spent 12 years as Chief Financial Officer of Biomet and then Zimmer Biomet. He shared that though he loved his job, it came at a high price in other areas of his life. He stepped down from his corporate job in 2020. His new CEO told him he was crazy to give up such a lucrative job. Florin said, “I may be a little crazy, but I am definitely Catholic, and God needs me elsewhere.” He wasn’t sure where God needed him, but he felt that, “Looking back, I see now that the Holy Spirit had been working on me for many years to change my direction and focus to what mattered most – my faith, my family and to give back.”

He was asked several times to join the board of Catholic Charities by Board President Paulette Davis. “God’s timing was perfect,” he said. “I had been asking the Holy Spirit for guidance on how I could serve the Church by engaging my heart and my mind while leveraging my business experience.” Florin said that the more he learned about Catholic Charities, the more he was drawn to the mission, and that the idea of helping the most vulnerable people right here in our communities pulled at his heart strings.” 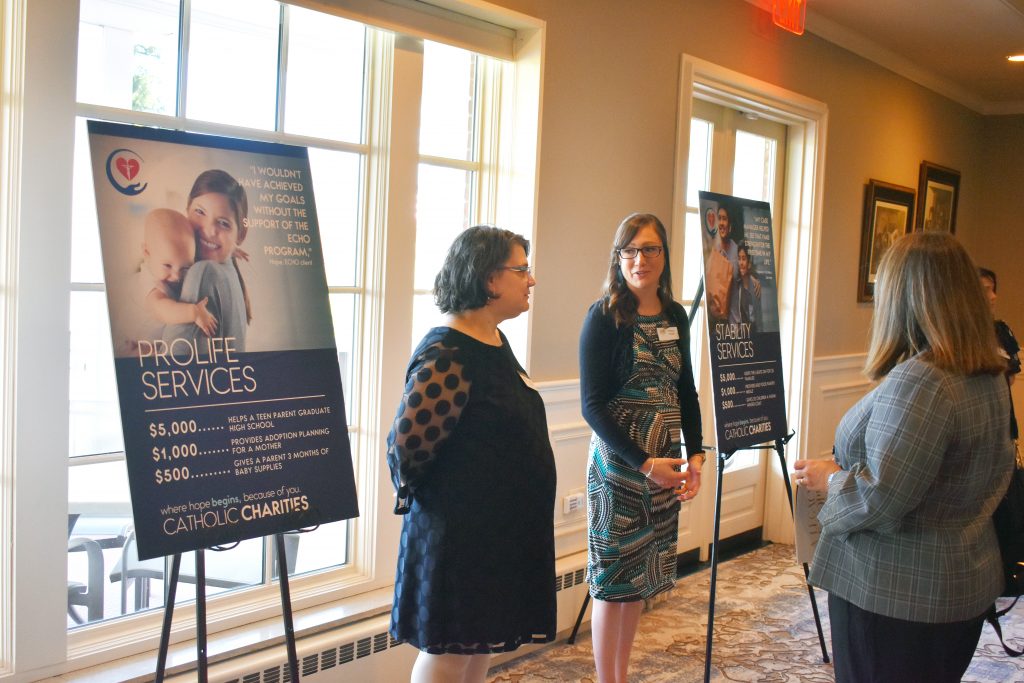 To date, Catholic Charities has aided more than 750,000 people through various programs such as pro-life and refugee services. The service organization expects to continue that aid for years to come.

Not only did Florin join the Catholic Charities Board in 2020, but he also later became interim CEO. When considering taking the job permanently, Florin questioned whether it was a good fit. All his experience had been in the for-profit world, and he had no experience in social services and was unsure if his background was an asset or a liability. He said, “After discussing the opportunity with Bishop Rhoades, my answer was a resounding ‘yes!’”

Florin shared that his decision was confirmed a couple of month ago. He had driven one of the new Afghan refugee families to the local mosque for Friday prayer service. On the drive home afterwards, the family asked Florin if he could take them to the local grocery store, which he was happy to do. When they arrived at the family’s home, the mother asked Florin in for tea and cookies.

“As I sat in their living room of the house that our agency had secured for them, I asked the son whether his mom liked the new house. Speaking in Dari, he turned to his mother and then back to me, and in English said, ‘She feels safe now.’” With emotion in his voice, Florin continued, “In that instant, I knew this was what God wanted me to do.”

In Catholic Charities’ 100 years, more than 750,000 people have been impacted, Florin shared. He continued, “We now have the opportunity – in fact the obligation – to help millions of people in our diocese over the next 100 years.”

The mission of Catholic Charities remains the same as it always has, to serve all those in need as Christ calls us to do. With that, Florin reminded the attendees that the night was about celebrating 100 years, but also ensuring the legacy of the organization for the next 100 years.

The evening ended with the fundraising portion of the program. The goal was to raise $100,000. Florin kicked things off by personally pledging $10,000 toward the mission. That was followed by two anonymous gifts of $25,000. By the end of the fundraiser, Catholic Charities surpassed their goal, and continue to receive pledges.

If you would like to donate to Catholic Charities or find out more about the organization, visit ccfwsb.org.