This article has been updated to reflect the correct location of the Camporee, The Center at Donaldson.

The Diocese of Fort Wayne-South Bend has offered the annual camporee event since 1985, a joint collaboration for the Fort Wayne and South Bend sides of the diocese since 2012. Young Scout members and their siblings are given the opportunity to grow in their faith while gaining a greater love of the great outdoors. This year, on Oct. 9-11, the weekend campout took place on the grounds of The Center at Donaldson near Plymouth.

Theresa Dirig is on the diocesan Catholic Committee on Scouting, the National Catholic Committee for Scouting and is Scoutmaster for the newly chartered girls’ Troop 519 at St. John the Baptist Parish, Fort Wayne. Dirig stated that the purpose of the Camporee is “to enhance the kids’ faith life and expose them to local Catholic sites to keep them interested in the faith.”

She explained that this is why The Center at Donaldson was selected as the site of the Camporee this year: She believes it is important to show young people the Catholic colleges and shrines within the diocese. “These are great resources for the youth.” 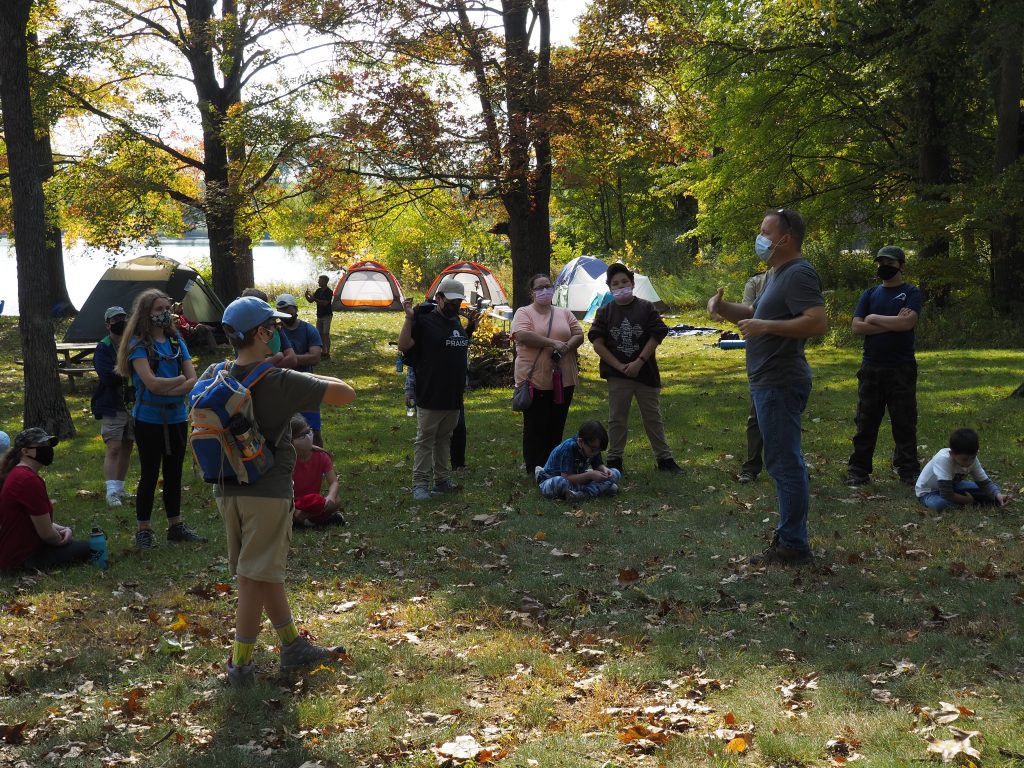 Photos by Jennifer Barton
At an annual gathering of Catholic Scouts Oct. 10 in Donaldson, members of the St. John the Baptist Boy Scout troop from Fort Wayne listen to a presentation by Geoffrey Williams, executive director of ecological services for the Poor Handmaids of Jesus Christ, who tells the history of the Poor Handmaids in the Diocese of Fort Wayne-South Bend.

In previous years, the Camporee has taken place at the University of Saint Francis in Fort Wayne, Holy Cross College in Notre Dame and St. Felix Retreat Center in Huntington. All of these locations, Dirig reported, have outdoor Stations of the Cross, which are incorporated into the weekend activities.

Each Camporee includes Catholic elements such as Mass, reconciliation and recitation of the rosary. This year, the campers used glow sticks as they said the rosary around the campfire. Each student broke their glow stick to mark their prayer.

The Scouts take on leadership roles by emceeing the stations and reading at Mass.

“We also try to tie in local Catholic history, like this year helping the Scouts and parents learn about St. Katharina Kasper,” Dirig added. “Last year we were at St. Felix in Huntington and shared information about Father Solanus Casey and Bishop Noll.” 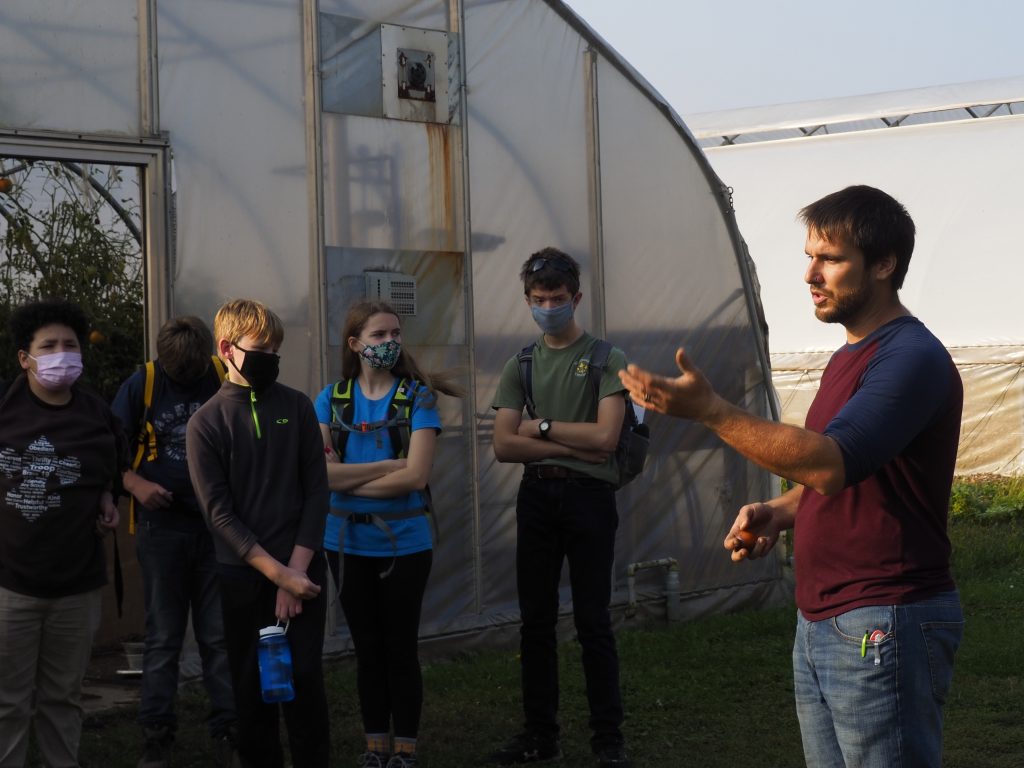 Sam Tepes, far right, runs the greenhouses at The Center at Donaldson. From him, attendees of the Catholic Camporee got the opportunity to learn about organically enhancing the soil and viewed the chickens he helps care for.

During the summer, several of the Scout troops had to shut down their programs temporarily, so Camporee provided a blessed opportunity to spend time together as a troop and with other Scouts from around the diocese. Throughout quarantine, Dirig had to find alternate ways to reach the Scouts and, as chairperson of the National Catholic Committee on Scouting – Religious Activities, she was able to facilitate the creation of a virtual lesson on St. Faustina for Divine Mercy Sunday. Carl Loesch, head of the diocesan Catholic Committee on Scouting, contacted the Marian fathers at the National Shrine of the Divine Mercy in Stockbridge, Massachusetts, who agreed to lead the virtual class. Roughly 270 families participated in the lesson, and it is still available online.

Attendance at Camporee used to earn the participating Scouts a badge, but the production of badges discontinued in 2015. However, the committee produces other opportunities for Scouts to earn badges, including the newest activity that Dirig is especially proud of called “Eastern Catholic Awareness.” This teaches young people about the beauty of the Eastern Catholic tradition, of which many of them are unaware. Around 80 families attended that online event. 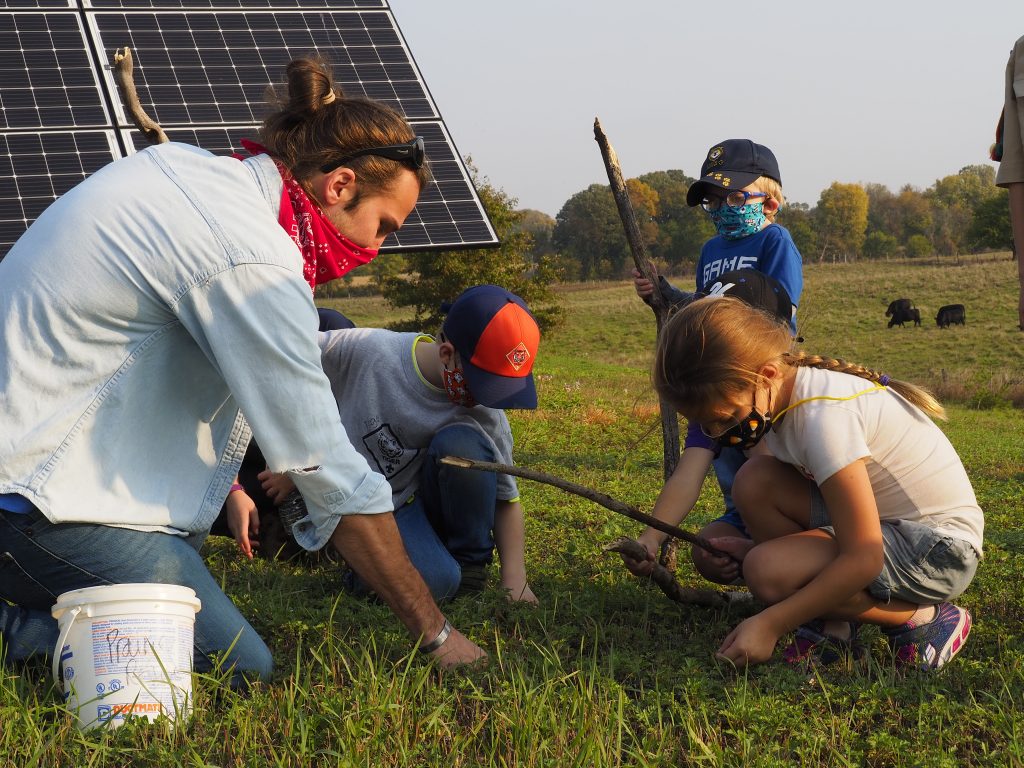 Mark Allen, Nick Allen and Eleanor Veselik, from left, young Scouts from St. Pius X Parish in Granger, receive a hands-on demonstration of invasive and native plants by Matthew Celmer in the environmental area of The Center at Donaldson.

“When the families work together on these, often the kids end up teaching the parents,” Dirig said. “It helps the kids realize that in all different walks of life, you can be a saint.”

Bishop Kevin C. Rhoades has been supportive of the Camporee and often attends the event. He has been known to interact with the young people and challenge them to go further in their Scouting experience, particularly toward earning their Pope Pius XII emblem, designed for older participants.

This year campers came from St. Pius X Parish in Granger, St. John the Baptist in Fort Wayne  and other Fort Wayne parishes such as St. Therese, St. Elizabeth Ann Seton and St. Vincent de Paul in Fort Wayne. The event is open to all Catholic Scout troops, though Dirig said historically the Cub Scouts and the Boy Scouts are the most represented at Camporee. 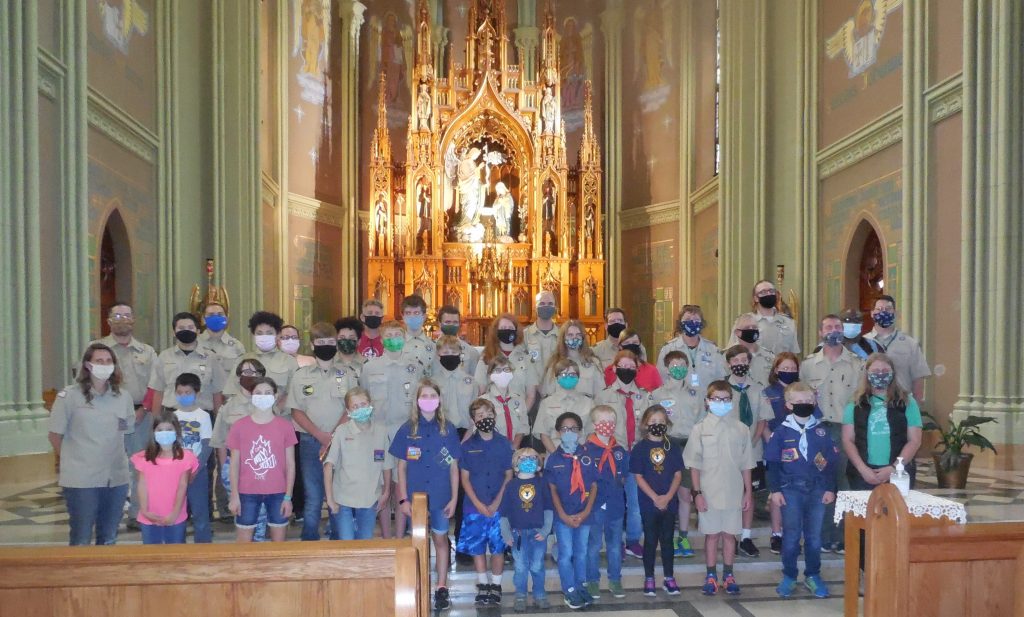 The Scouts attended Mass at Ancilla Domini Chapel, Ancilla College, during the weekend.

The Center at Donaldson, founded by and still run by Poor Handmaids of Jesus Christ, is located on 1,100 acres of what is mostly natural landscapes. Three presenters taught Scouts about the importance of maintaining the land in its natural form, particularly encouraging the growth of native plants and utilizing natural energy sources.

Scouts had the opportunity to visit the greenhouses that Ancilla greenhouse specialist Sam Tepes cultivates. Here they learned ways to enhance soil to allow for more environmentally friendly growing, especially the use of biochar, a soil amendment. Some even tasted the edible charcoal.

Matthew Celmer, director of MoonTree Studio on the PHJC campus, showed off the campus’s solar panels and wind turbine, explaining how the college is trying to generate as much of its own electricity as possible, as well as filtering its own water. He also pointed out the native plant life and the importance of such plants as milkweed.

The college groundskeeper, Geoffrey Williams, led the Scouts on a nature hike, pointing out methods for sustainable livestock rearing that Ancilla has begun to put into place. He also told the story of the Poor Handmaids and how they came to the Hessen Cassel area near Fort Wayne in the 1860s, establishing St. Joseph Hospital. Williams informed campers of how the Potawatomi tribes who once made their home in northern Indiana managed the growth of plants by using fire, similar to how Ancilla rejuvenates its prairie land today.

Most of the Scouts agreed that their favorite part of the Camporee was being out in nature and learning about the world around them. Connecting with nature combines caring for God’s creation with their faith. Older Scouts even engaged in a service project to help beautify the grounds.

But a love of nature is not all that Scouts took home from the trip. New friendships were made and old friends reunited. There was time for relaxing; for fishing or tossing a football with peers, along with “enhancing Scouting skills” by making lanyards for finger rosaries. 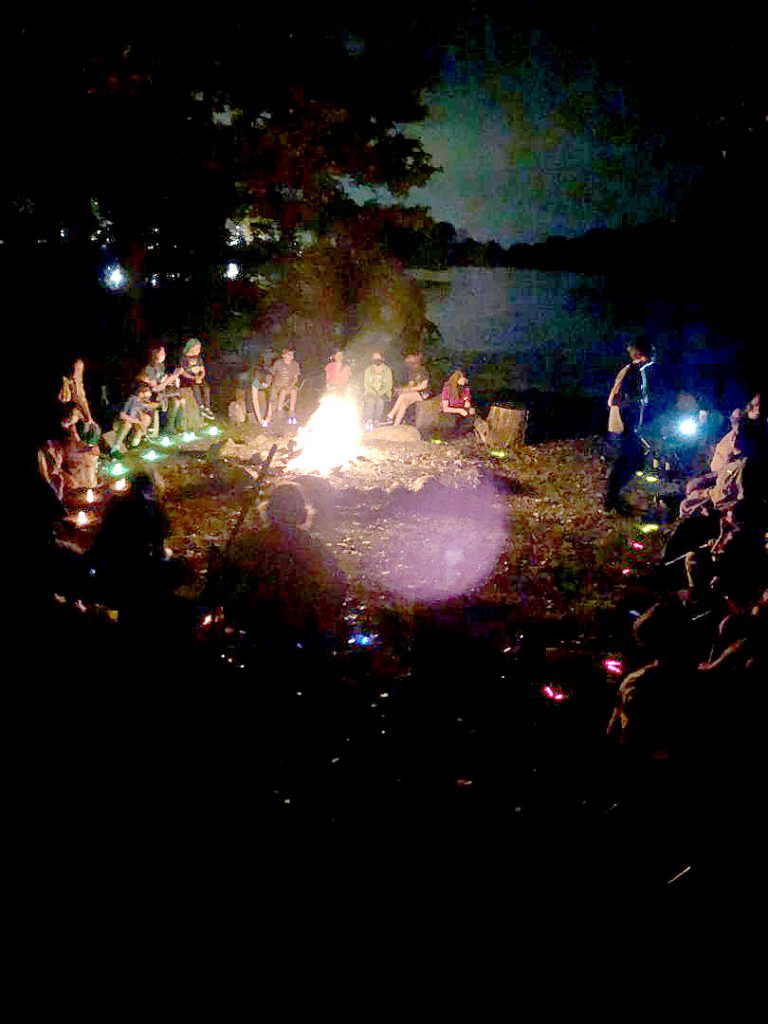 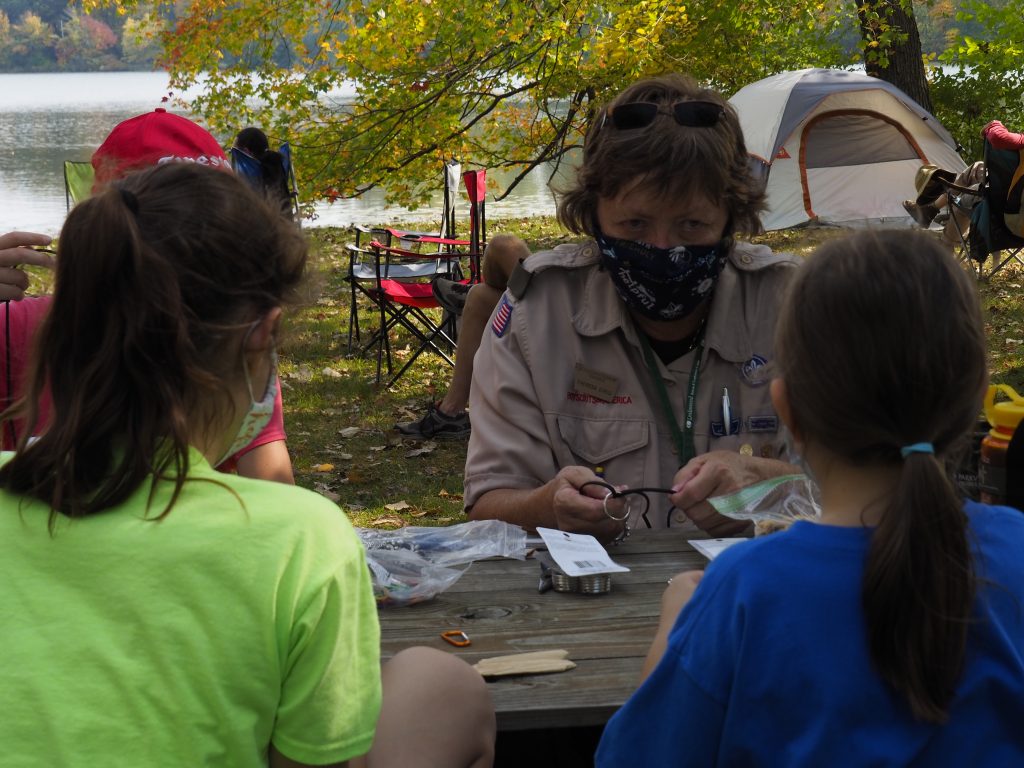 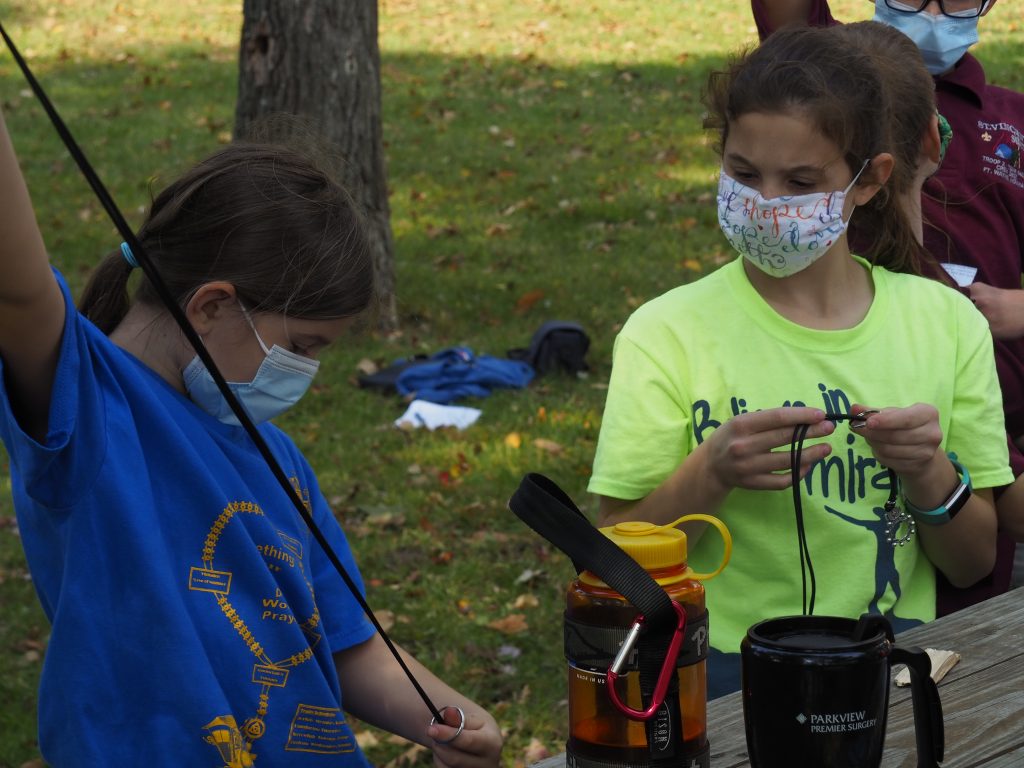 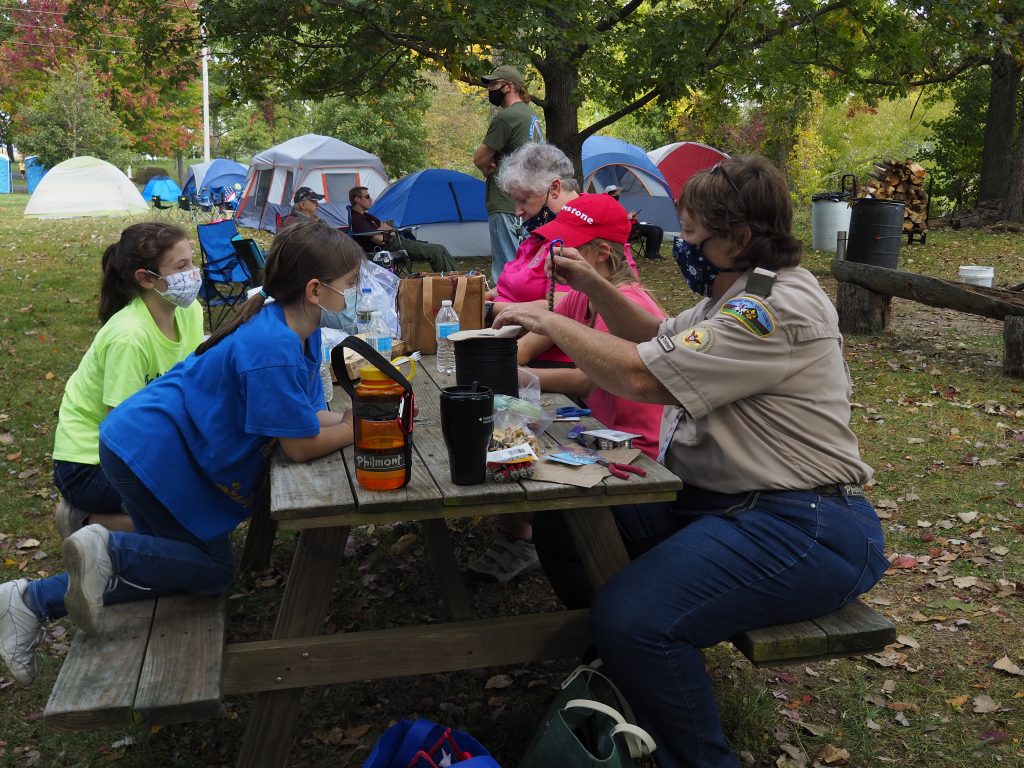 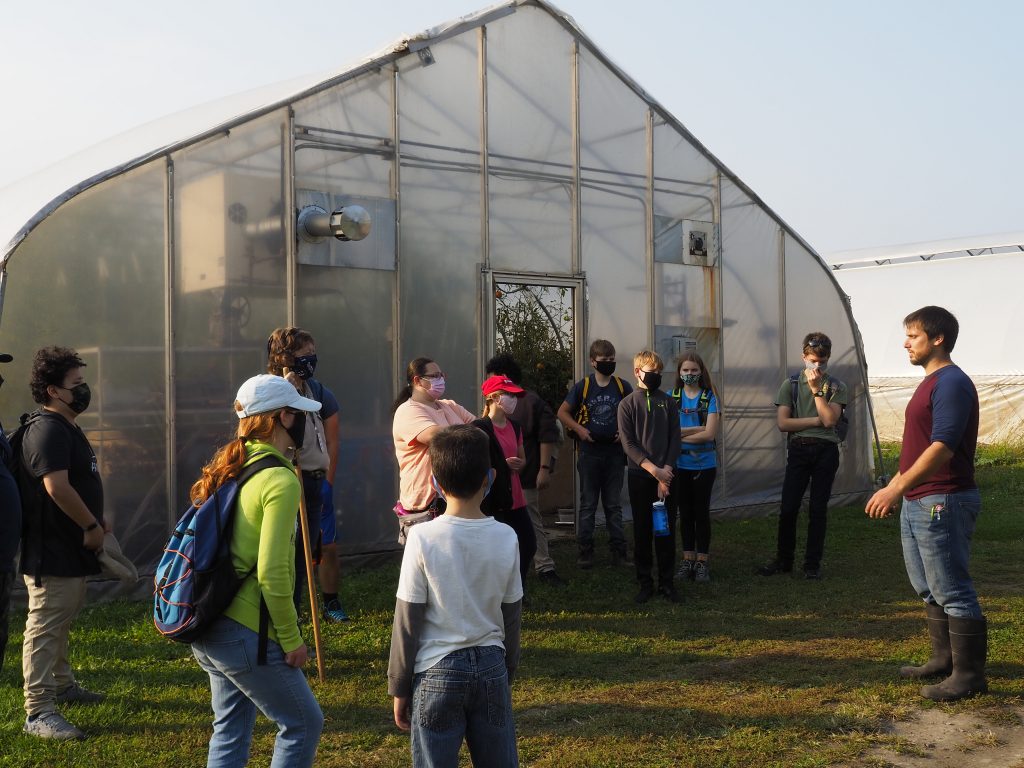 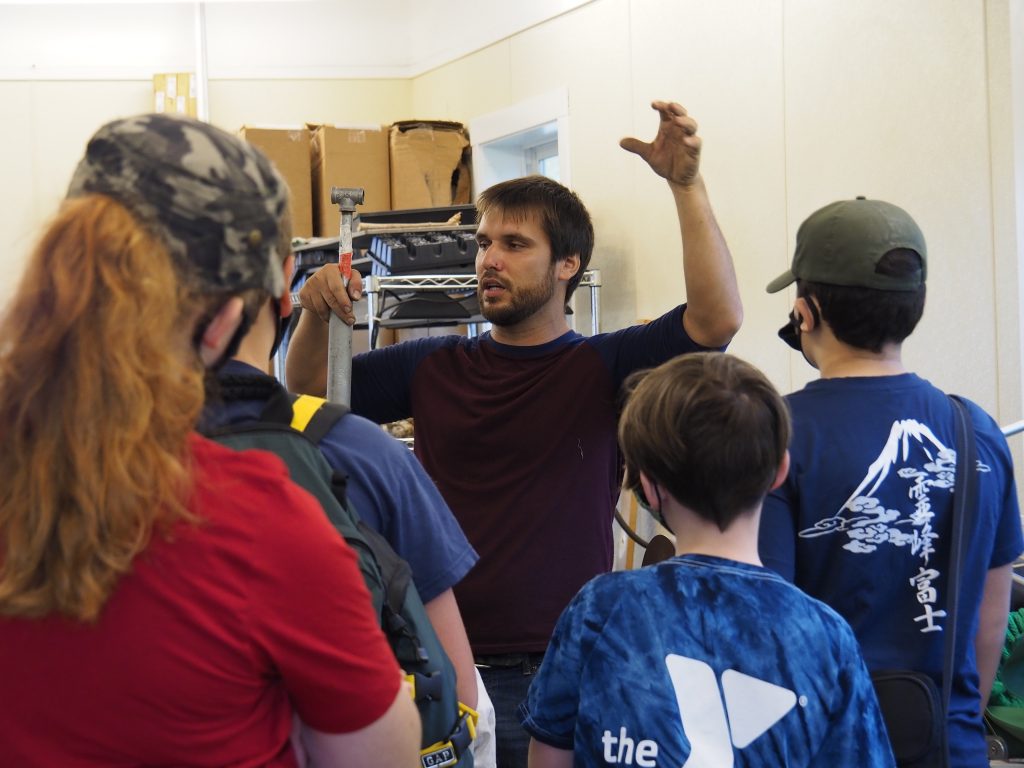 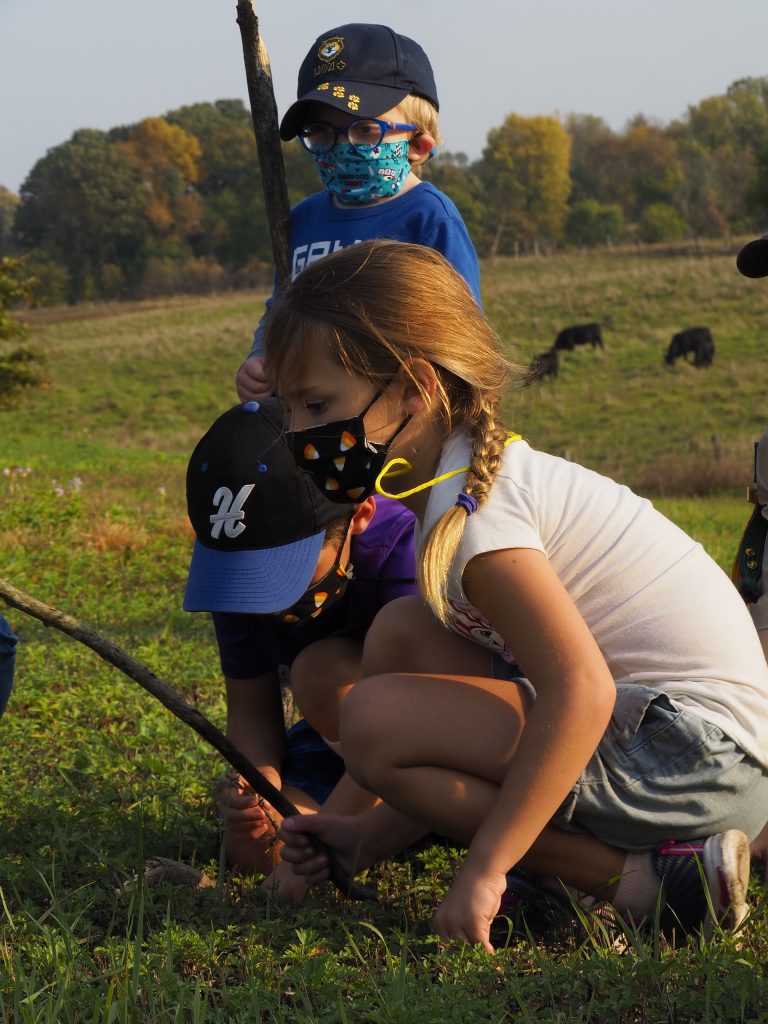 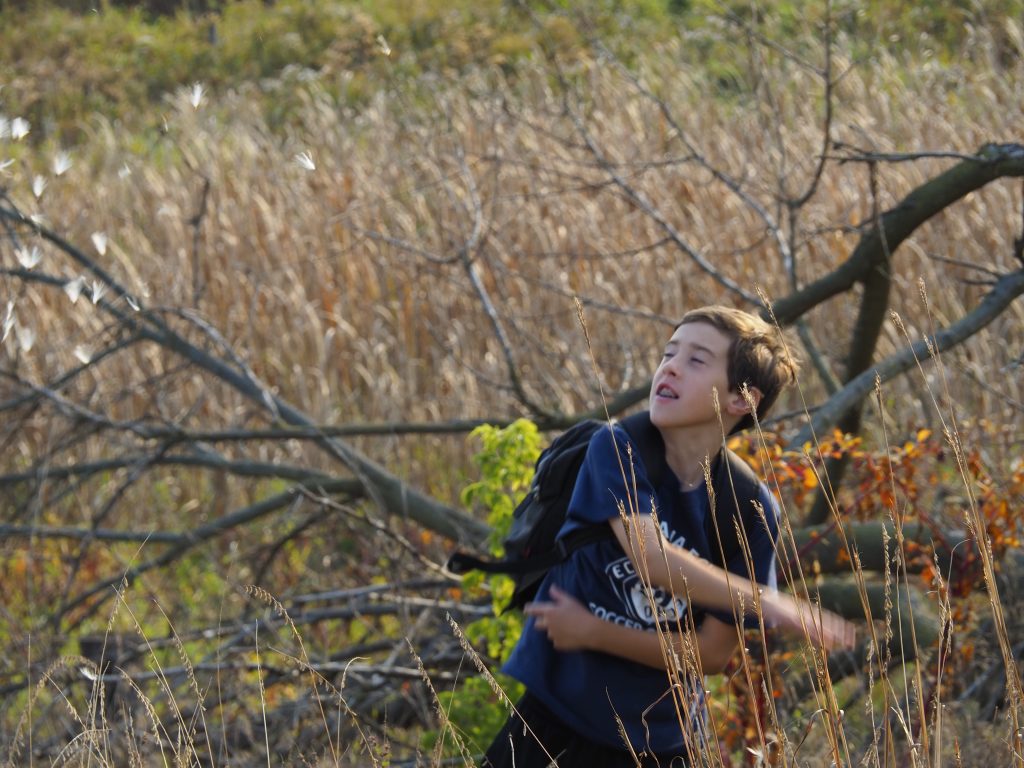 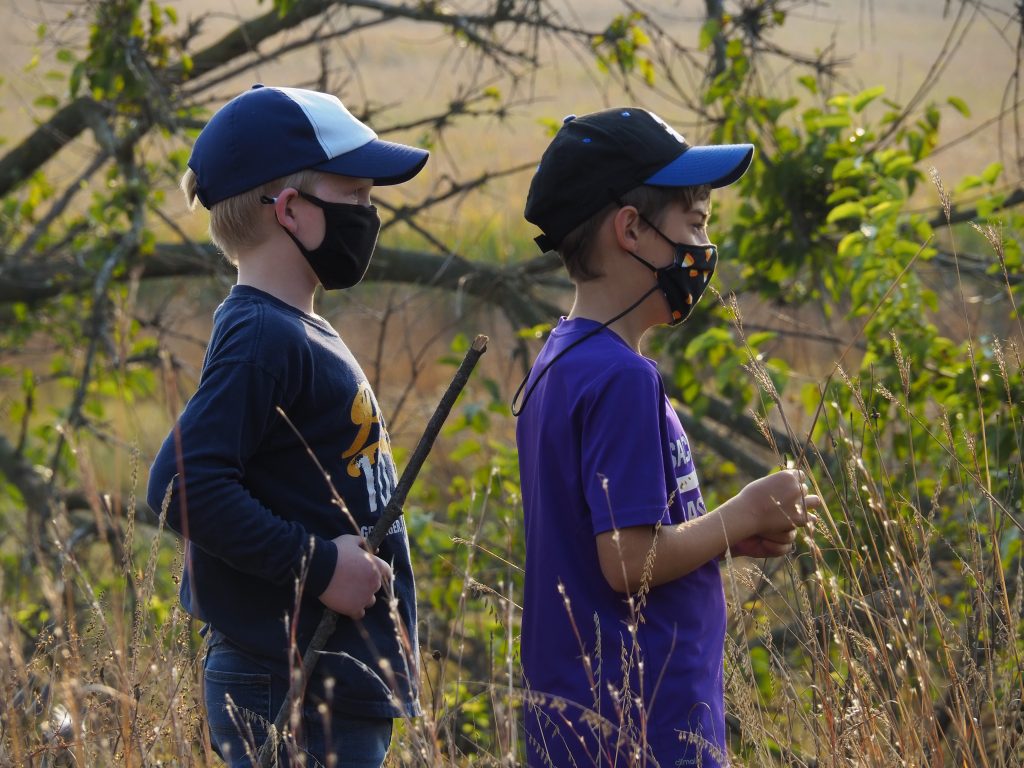 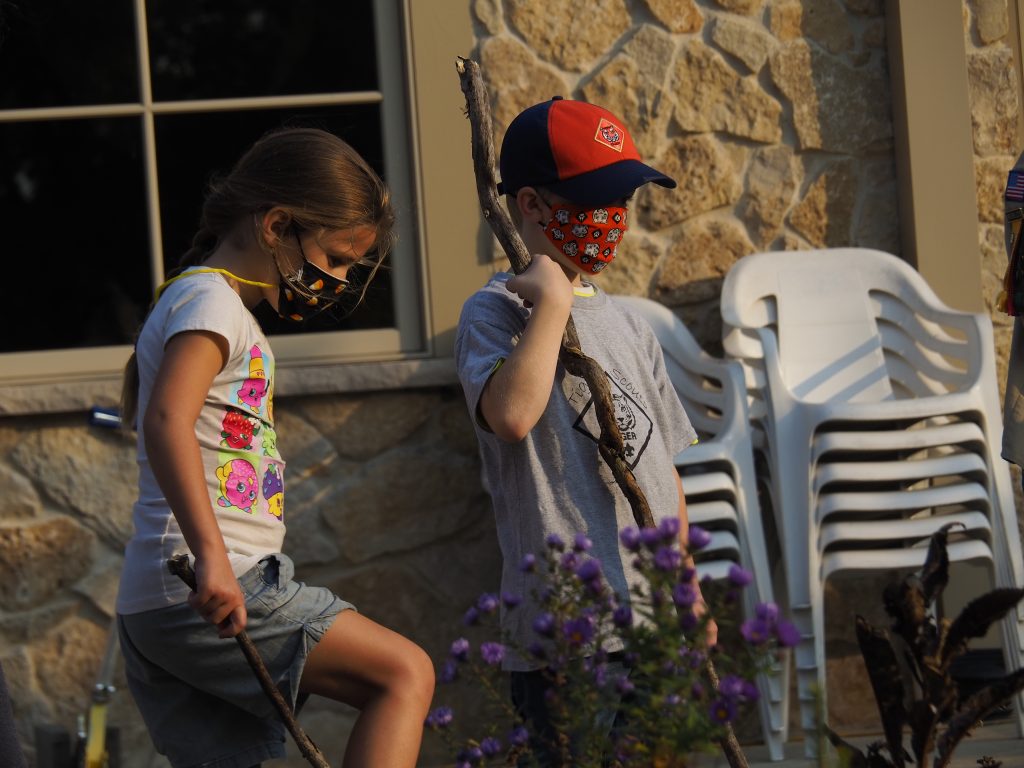 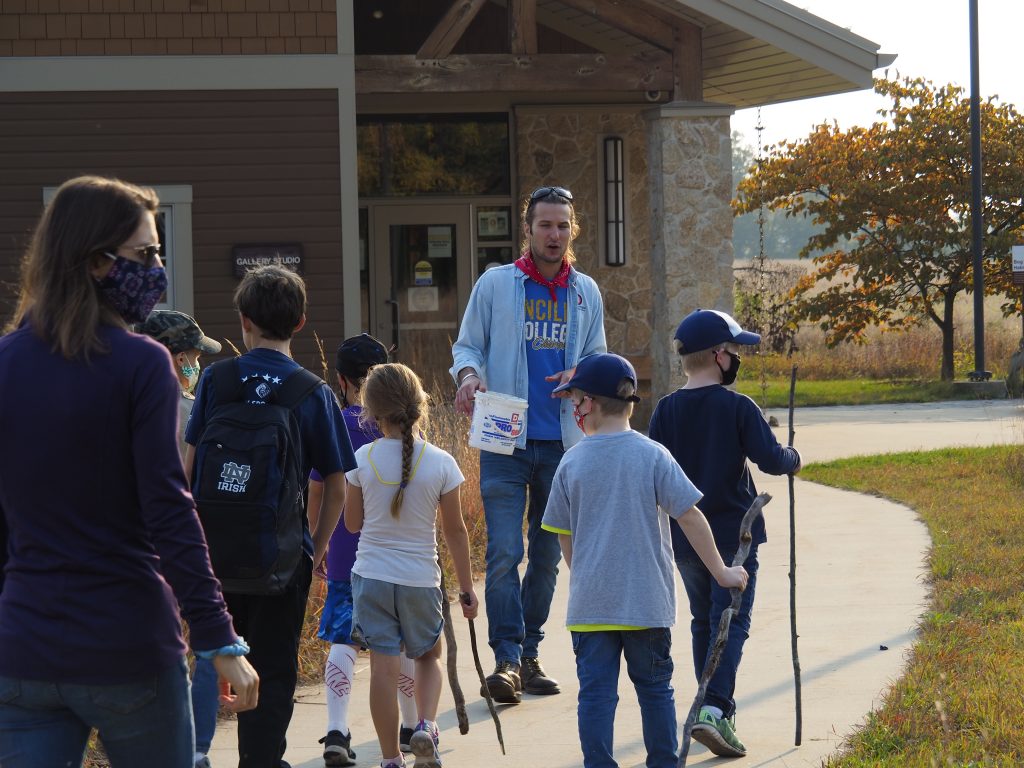 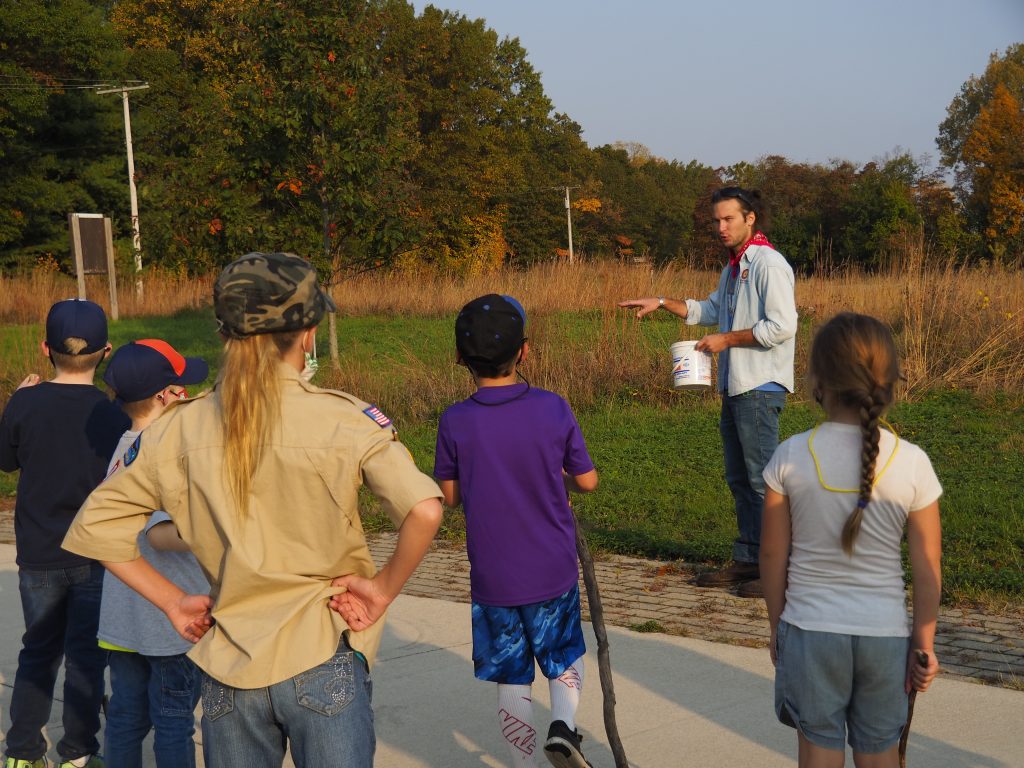