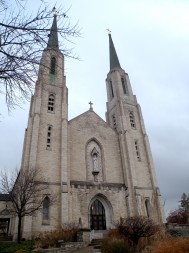 The Cathedral of the Immaculate Conception is celebrating an anniversary this year. On Dec. 8, Bishop Kevin C. Rhoades will celebrate a 7 p.m. Mass in commemoration of the 150th anniversary of the dedication of the cathedral. A reception will follow. All are invited.

FORT WAYNE — The solemnity of the Immaculate Conception on Dec. 8, a holy day of obligation, will also mark a celebration for the Cathedral of the Immaculate Conception. The church was dedicated as a cathedral 150 years ago. A Mass commemorating the 150th anniversary of the dedication will be celebrated by Bishop Kevin C. Rhoades on Dec. 8 at 7 p.m. A reception will follow in the Cathedral Hall. Historic memorabilia and photographs will be on display in Cathedral Hall and in the parish library. The faithful are invited.

The humble beginnings of the majestic Cathedral of the Immaculate Conception and Cathedral square are tied closely with the establishment of the Roman Catholic Church in northern Indiana and the City of Fort Wayne.

In 1830, the year following the incorporation of the Village of Fort Wayne, a temporary Catholic settlement was begun when Father Steven Badin — the first priest ordained in the United States — was placed in charge of the Potawatamie Indian mission in Indiana. He reportedly presided at the first Catholic Baptism in 1831 and later the first Catholic marriage of record in Fort Wayne — then under the ecclesiastical jurisdiction of the Diocese of Bardstown (Kentucky). Father Badin negotiated with Peace-Chief Jean-Baptiste de Richardville and assisted Catholic pioneers in purchasing on July 18, 1831, a large portion of what is now Cathedral square. The cathedral currently stands on that original southwest acre of ground on Piqua Plank Road (now Calhoun Street) bought for $100 from John T. Barr.

In 1836, Father Louis Mueller was appointed the first resident pastor of the Fort Wayne Territory in the Vincennes Diocese. The northwest portion of land on the Calhoun Street side of Cathedral square was purchased from Samuel and Eliza Hanna in 1837, but financial problems delayed construction of a permanent church. Father Mueller eventually succeeded in building a small, solid frame structure in about 1839. It was called St. Augustine.

In 1840, a French-born priest named Father Julian Benoit (pronounced Ben-wah) replaced Father Mueller as pastor. Popular with both the Miami Indians and local citizens, he indeed is known as the “Builder of the Cathedral.” Father Benoit paid off the debt and purchased the remaining portion of the square, initially for use as a cemetery.

On Jan. 8, 1857, the Holy See created the Diocese of Fort Wayne. Father John Henry Luers was appointed the first bishop and he began residing with Father Benoit in the rectory built in 1853-54. Bishop Luers designated the little frame church the Cathedral of St. Augustine. But since Fort Wayne now was a See City, planning began for erecting a larger, more permanent cathedral (see sidebar, “Cathedra”). While Father Benoit marshaled supporters and finances, the Cathedral of St. Augustine was moved to the east side of the square in 1859 to make room. Shortly thereafter, however, it was destroyed by fire.

With Father Benoit serving as chief architect and fund raiser, a structure measuring 80 by 180 feet was designed, patterned after Europe’s Gothic churches. Two matching front towers were to be surmounted by lofty twin spires rising 200 feet above street level, dominating the city’s skyline.

The foundation was laid on the original site of the old church. On Trinity Sunday, June 19, 1859, the cornerstone was placed by Bishop Luers.

Following a Church/European custom, the new worship facility was built over the former graves of the deceased — the Miami burial grounds.

Before its completion, the Fort Wayne Weekly Sentinel printed this glowing tribute: “This magnificent edifice … is one of the finest on the continent, and altogether the grandest church structure in the West …”

Initially, the cathedral had a seating capacity of 1,140 people in 228 pews, exclusive of the sanctuary and choir loft. The ceiling was supported by 14 wooden Gothic columns. There were 16, 28-foot stained glass windows, and a large sanctuary window of Mary on order from France — installed in the summer of 1861. Brass candlesticks, adorned with six-inch figures of the Apostles, were designed and molded by nuns in Paris for the main and aide altars. The Mission Crucifix, which had hung in St. Augustine Church, was placed in the new cathedral. Both the candlesticks and Mission Crucifix now are in the sanctuary. The altar stone — carried by missionaries to the area earlier in the century, before being placed in the original church — also was moved to the Cathedral. It is believed to be the region’s oldest altar stone.

The cost of the cathedral’s construction was about $54,000 — exclusive of pews, an organ and altars, which amounted to an additional $9,000. On his own initiative, Father Benoit raised more than $46,000 from contributions he personally collected in France and New Orleans, and from his own purse.

The cathedral was completed in about 18 months and dedicated to the greater honor and glory of God on Dec. 8, 1860, the feast of the Immaculate Conception. In Mary’s honor, it was so named (see sidebar, Our Patroness).

After serving the parish for 45 years, the recently named Msgr. Benoit died on Jan. 26, 1885. At his request, he was buried in the cathedral “… that in death, as I was in life, I may be among the people whom I loved.”

Just 36 years after completion, the first of many cathedral renovations took place. During its 175-year history, the majority of the nine bishops and 13 rectors not only left their own individual marks with some updating and remodeling — primarily so the sanctuary could meet the needs of the liturgy at the time — they enhanced the overall beauty and function of the cathedral with an ongoing program of maintenance and renovation. Many also were responsible for other construction and restoration on the square. All of that work cannot be included here due to space limitations, however, but only the projects involving worship space.

Msgr. Joseph H. Brammer (1885-1898) — directed creation of present 12 stained-glass windows by artists of Royal Bavarian Art Institute for Stained Glass, Munich, Germany, and imported wood-carved Stations of the Cross from Germany. Also replaced the original Communion rail with a curved, intricately-carved one of white marble and filled in rose window at center of exterior façade with statue of Blessed Mother above main entrance.
Father John H. Guendling (1898-1901) — directed erection of a bishop’s house and chancery on square’s southeast corner.

Msgr. Thomas M. Conroy (1921-1946) — called “Rebuilder of Cathedral” because of extensive improvements and modifications, such as enlargement of south sacristy, addition of two small wings providing side entrances and vestibules for four confessionals, and thorough renovation of church interior. Work included paintings and frescoes; new, flat-canopied pulpit with spiral staircase; refurbishing of the baptistery; and installation of terrazzo floor, present pews and chandeliers. Also, a new organ was put in with added carillon; and hand-carved, Belgian oak screen (reredos), frames for Stations of the Cross, main altar, two side altars, presider’s chair and bishop’s chair all commissioned. In addition, slates removed from spires, replaced with copper and one large bell recast. Diocese divided in half with formation of Diocese of Lafayette-in-Indiana (1944).