CINCINNATI (CNS) — Archbishop Dennis M. Schnurr of Cincinnati called it “a great blessing and honor” for all living and worshipping in the archdiocese to have Pope Francis elevate the city’s Cathedral of St. Peter in Chains to the status of a minor basilica.

It is the first such designation for any church in the Cincinnati archdiocese.

Archbishop Schnurr announced the designation Aug. 15, the feast of the Assumption of Mary, at the beginning of Mass he celebrated with Father Jan Schmidt, the rector, and Father Ray Larger, parochial vicar of what is called the Cathedral Basilica of St. Peter in Chains. It is the 89th basilica in the United States.

“Let us pray on this day, as we honor Our Lady in her Assumption, that the Church of the Archdiocese of Cincinnati, her clergy and faithful, along with all the people of this great city, may benefit from this blessing and give thanks for all that the Lord has brought to fruition,” the archbishop said.

The Mass was open to the public but included social distancing and other safety precautions due to COVID-19. The Mass was also livestreamed.

The title of minor basilica is given to churches around the world in recognition of their historical or cultural importance, artistic beauty and significance in the life of the Catholic Church. The title denotes a closer relationship to the pope. Such a church also must be a center of active and pastoral liturgy with a vibrant Catholic community.

An application for basilica status must come from the local bishop and include a description of the church, its history and unique nature, and an ample number of detailed interior and exterior photos. 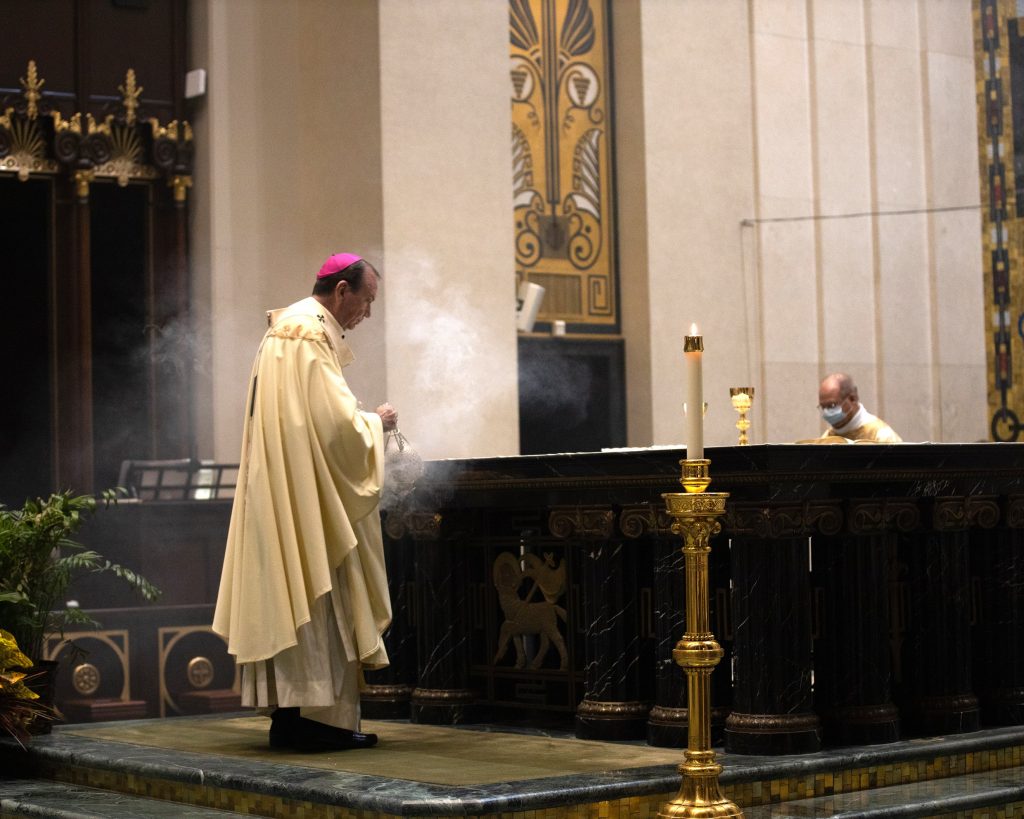 Archbishop Dennis M. Schnurr of Cincinnati celebrates Mass at the Cathedral Basilica of St. Peter in Chains in Cincinnati Aug. 15, 2020. Pope Francis elevated it to a minor basilica that same day, making it the first such church with this designation in the Cincinnati Archdiocese. (CNS photo/courtesy The Catholic Telegraph)

In 2018, with Archbishop Schnurr’s permission, Father Schmidt, requested the Vatican’s Congregation for Divine Worship and the Discipline of the Sacraments grant the title of minor basilica to the historic church in Cincinnati.

The cathedral, which will celebrate its 175th anniversary in November, is the oldest cathedral, built as a cathedral, that is still in use in the United States. Its designation as a minor basilica is both an honor for the region and a reason for the local faithful to celebrate, said Father Schmidt, who has been the cathedral’s rector since 2017.

“It’s the quality of the cathedral’s structure, the absolute beauty of its architecture, the biblical symbolism throughout, the quality and prayerfulness of its liturgy and ecclesiastical significance as a cathedral that make it very important and very special for the archdiocese and in the American Catholic scene,” he said.

Designed by Henry Walter, architect of the Ohio Capitol in Columbus, the cornerstone of St. Peter in Chains was laid May 20, 1841. It was formally dedicated Nov. 2, 1845. Its single spire, constructed of pure white limestone and soaring 220 feet above street level, was the tallest man-made structure in the city for many decades.

A significant renovation of the structure, overseen by well-known Cincinnati architect Edward Schulte, was completed in 1957.

“The Catholic Church and the large number of Catholics in our region have helped make the Greater Cincinnati area the great place it is to live, work, play and pray,” said Cincinnati Mayor John Cranley, who was at the Mass with his family when Archbishop Schnurr made the announcement.

“From starting the major hospitals that have cared for the sick, to feeding the hungry and helping the poor, to educating generations of Catholics who have risen out of poverty and to the heights of civic and business leadership,” he said in a statement, “the Catholic Church has provided a living testament to its core beliefs, and this basilica has served as beautiful physical embodiment — a sort of Statue of Liberty — of these good works and serves as an ever-present reminder to Catholic Cincinnatians that they have a proud spiritual home.”

Ohio Gov. Mike DeWine and his wife, Fran, congratulated Archbishop Schnurr and the entire archdiocese on the honor, calling the cathedral “a historic place special to Cincinnati and to Ohio. “(It) is an honor that the Catholic faithful across Ohio should celebrate!” he said.

Prior to the decrease in Mass schedules due to the pandemic, over 1,000 Masses a year, including the archdiocesan liturgies, were celebrated at the cathedral basilica. It is a pilgrimage site for many local Catholics and has hosted many tours.

A special Mass of thanksgiving will be celebrated at the Cathedral Basilica of St. Peter in Chains Nov. 7 to mark the 175th anniversary of the church. During the Mass, the symbols granted to the church because of its new status, will debut for the first time and be enshrined in the cathedral basilica.

One of those symbols is a “conopaeum,” a canopy resembling an umbrella with silk panels of red and yellow carried in processions or placed over an altar.