FORT WAYNE – The University of Saint Francis is pleased and honored to announce Cardinal Peter Kodwo Appiah Turkson as the featured speaker for the school’s 2021 commencement.

“Cardinal Turkson’s appearance at our commencement is a tremendous honor for the university. We are grateful for his willingness to come to Fort Wayne and share his wisdom with our graduates and the community. We look forward to his appearance with great anticipation,” USF president Father Dr. Eric Albert Zimmer said. 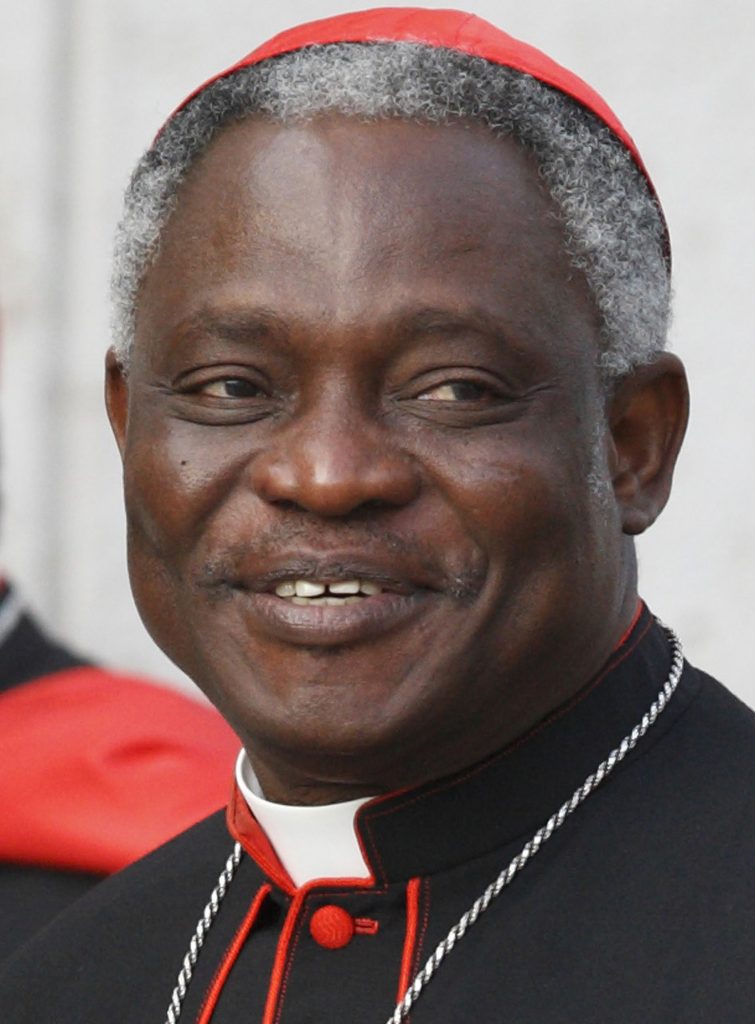 Ghanaian Cardinal Peter Turkson, president of the Pontifical Council for Justice and Peace, is eligible to vote in the upcoming conclave. He is pictured in a 2010 file photo. (CNS photo/Paul Haring)

The cardinal will receive an honorary degree from the university. He will speak to the graduates who are gathered about their Christian vocation.

Commencement will be at 2 p.m. on May 1 at the Allen County War Memorial Coliseum, 4000 Parnell Avenue, Fort Wayne. This year’s ceremony is for 2020 and 2021 USF graduates. Updated information on attendance will be available at commencement.sf.edu. The cardinal will also attend a baccalaureate Mass celebrated by Bishop Kevin C. Rhoades for the graduates earlier in the day at the Cathedral of the Immaculate Conception and meet with Fort Wayne Mayor Tom Henry during his visit, as well as with select members of the University of Saint Francis board of trustees.

The invitation to speak at commencement was extended to the cardinal because of the body of his life work as one who is most interested in issues of justice and peace, as well as his current work on the advancement of human development, said Father Zimmer. “USF, as a Franciscan university whose concerns for the sanctity of life and the environment stand foremost in much of our work, cannot be more pleased to have the reputed author of the first draft of Laudato Si’ with us here in Fort Wayne. His presence further emphasizes the commitment of the University to its Catholic heritage and heightens the profile of the university.”

Cardinal Turkson was appointed by Pope Francis as the first prefect for the Dicastery for Promoting Integral Human Development in January 2017. Working closely with Pope Francis, Cardinal Turkson leads the Vatican’s teaching and advocacy on issues of justice and peace, economic inequality and global solidarity.

Cardinal Turkson was named the first Ghanaian Cardinal in 2003. He was appointed by Pope Benedict XVI as President of the Pontifical Council for Justice and Peace in 2009 and reconfirmed by Pope Francis in 2013. A champion of environmentalism and sustainability, Cardinal Turkson provided the draft of “Laudato Si’,” On Care for Our Common Home, to Pope Francis prior to the declaration of the pontiff’s encyclical on the environment and human ecology in May 2015.

“As it states in its statutes, the Dicastery for Promoting Integral Human Development expresses the Holy See’s concern for issues of justice and peace, including those related to migration, health, charitable works and the care of creation,” said Father Zimmer. “USF’s focus on health care complements well with concern for the care of creation. Cardinal Turkson’s work on the ethics of business leadership stands out as well. Further, we desire to refocus on our Catholic heritage, consistent with Church social teaching and the Gospel. Hosting a prefect of a Vatican dicastery furthers that public commitment.”

Cardinal Turkson began his higher education at St. Teresa’s Seminary in Amisano, Ghana, and St. Peter’s Regional Seminary in Pedu, Ghana. He earned a master of theology degree from St. Anthony-on-Hudson, Conv. Franciscan Seminary, New York. He continued his studies in Rome at the Pontifical Biblical Institute, earning a license in Sacred Scripture, and then began work on his doctoral thesis. In addition, he has been awarded numerous honorary degrees and speaks six languages: Fante, English, French, Italian, German and Hebrew.

Early in his career, Cardinal Turkson served as staff, chaplain and lecturer at seminaries in Ghana and on the Ivory Coast. He was appointed Archbishop of Cape Coast by St. John Paul II in 2003. In addition, he served as president of the Ghana Catholic Bishops’ Conference for 17 years, has been a chancellor of the Catholic University College of Ghana since 2003, and has held various memberships and officer positions for councils and boards, including chairman of the Ghana Chapter of the Conference of Religions for Peace and Ghana National Peace Council. He participated in the conclave of April 2005, which elected Pope Benedict XVI, and in the conclave of March 2013, which elected Pope Francis.

For more information on Cardinal Turkson’s appearance or the USF commencement, contact Trina Herber, coordinator for academic affairs, at 260-399-7700, ext. 6000, or [email protected]sf.edu.