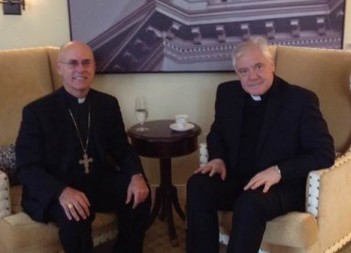 Bishop Kevin C. Rhoades, left, is shown with Cardinal Gerhard Ludwig Müller, prefect of the Congregation for the Doctrine of the Faith who offered a keynote address at a conference on poverty sponsored by the University of Notre Dame Center for Ethics and Culture.

NOTRE DAME — The prefect of the Congregation for the Doctrine of the Faith (CDF) and a Nobel Prize winner were among the distinguished speakers at a conference on poverty sponsored by the University of Notre Dame Center for Ethics and Culture. The conference opened with a Mass celebrated by Bishop Kevin C. Rhoades of the Diocese of Fort Wayne-South Bend on Oct. 30 and continued through Nov. 1.

In a keynote discussion, Cardinal Gerhard Müller, prefect of the CDF, was asked to speak about his 2014 book, “Poor for the Poor: The Mission of the Church” (Vatican Publishing House). Pope Francis wrote the preface to the book.

The cardinal said that in his pontificate, Pope Francis has worked to keep in the public discourse the issue of poverty understood in its widest possible sense.

“Going well beyond a merely economic conception of poverty, Pope Francis has tried to indicate to the world the true poverty of the human condition in our times: the poverty of body and soul, pointing out all the forces at work in the world further impoverishing mankind,” Cardinal Müller said.

“The mission of the Church is to free mankind from the poverty of our fallen condition and constantly remind us that we are created in the image and likeness of God; we are the object of His divine love; we are called to the richness of eternal life with Him.”

This concept is reflected in Catholic social teaching, which “places at the very center of the discussion the true goal of man: not a rich material life on earth, but the riches of eternal life with God,” he explained, and this goal can be reached through virtue, “the true wealth of man.”

A key virtue is solidarity, Cardinal Müller continued, defining solidarity as “a fundamentally Christian virtue, the living out of the Gospel in recognition that all men are bound together, in the image of the eternal union of the Holy Trinity.”

Citing the remarks of Pope Francis earlier that week, the CDF prefect explained: “Solidarity is more than sporadic acts of generosity. It is a mood of thought and action that begins with the community, giving priority to the life of all, as opposed to merely thinking in terms of the individual. It means fighting against the structural causes of poverty, inequality, the lack of work, the negation of rights.

“It means facing head-on the effects of a system that places profit at its center, not man, a system which leads to forced dislocation of peoples, human trafficking, drugs, war, violence and all of those realities suffered by many, which we are all called to transform in the light of man’s true vocation, his true dignity.”

Cardinal Müller also discussed the responsibility of wealthier countries to help those that are struggling, not through commercialization, but rather by genuine assistance that would honor the autonomy of the people as well as the historical and cultural structures of a country.

The other keynote address was presented by James Heckman of the University of Chicago, a Nobel Laureate in Economics. He spoke on “Predistribution: A strategy for promoting flourishing lives.”

Like Cardinal Müller, Heckman also stressed virtue as a remedy for poverty. He cited various statistics that show the inequality between people raised in poor households and those from wealthier homes. However, he said that financial assets alone do not explain this disparity, as other factors enter into the picture, such as culture and transmission of values.

Heckman said that a very traditional, Biblical method to alleviate poverty is through giving alms to the poor. He proposed another “dynamic strategy” to approach poverty and generational inequality through what he called “predistribution,” which he defined as “a strategy of giving skills to people to avoid them being poor in the first place, to improve human dignity and to present what I think is a complementary strategy to redistribution.”

This predistribution strategy, which would be economically efficient and is rooted in economic analysis, would build character, promote family values and create skills, Heckman contended. Skills he mentioned were motivation, self-regulation, and what he called the classical Christian virtues, all of which help people take greater control of their lives and have better outcomes such as better health and financial stability, less incarceration, stronger families, etc.

Skills often get overlooked in discussions of inequality, he continued, but skills are “major determinants of inequality.” Skills create agency, the capacity for people to act on their own to build their lives and work with others. Skills also promote the dignity of human beings, which he said is consistent with what Pope Francis has been saying.

We have been “fixated” on pure cognitive skills, Heckman continued, but recent research has shown that character skills play an important role in life success; and character skills can be fostered by families, taught in schools and acquired through social interactions.

Since the early years of a child’s life are so important, Heckman said more consideration should be given to nurturing family environments and mentoring children and parents. Not only would this benefit human flourishing and dignity, it also would be more effective and less expensive than simply giving alms to the poor.

One of the conference sessions dealt with the success of Catholic schools in bringing children out of poverty. Archbishop Fernando Chomali Garib of the Archdiocese of Concepción, Chile, told the conference about the dramatic rise in per capita income in his country that is related directly to Catholic education.

Nicole Garnett, a professor in the Notre Dame School of Law and co-author with her colleague Margaret Brinig of “Lost Classroom, Lost Community: Catholic Schools’ Importance in Urban America” (University of Chicago Press, 2014), explained why Catholic schools matter: They model the joy of vocation and form children in the Catholic culture; they provide an excellent education to disadvantaged children; and they provide stability to neighborhoods.

Shavar Jeffries, a Newark, New Jersey, attorney and founder of a system of charter schools in Newark, explained how school choice and deregulated education have improved the life outcomes of poor children, and he argued for more school choice programs.

This year’s event was the 15th annual conference of the Notre Dame Center for Ethics and Culture, which is dedicated to sharing the richness of the Catholic moral and intellectual tradition through teaching, research and dialogue across a range of disciplines.