The Lenten season is meant as a time to focus on prayer and preparation for the highest of feasts in the liturgical year: the joyful celebration of Easter. This is especially true for those preparing to complete or receive the sacraments of initiation at the Easter Vigil Mass.

On Sunday, Feb. 23, Bishop Kevin C. Rhoades celebrated the Rite of Election and Call to Continuing Conversion at the Cathedral of the Immaculate Conception in Fort Wayne for those seeking full communion with the Catholic Church and who live and worship on the eastern half of the diocese. The rite anticipates the joy of their entrance into the Church and is one of the final steps toward full communion.

During the service, Bishop Rhoades declared that the catechumens and candidates were chosen and called “into the holiness of (God’s) trinitarian life; the holiness of His love as His adopted children.”

Seventy catechumens and 91 candidates were presented for acceptance into the Church at the service, which began with the Liturgy of the Word and was followed by the Rite of Election and Call to Continuing Conversion.

Catechumens are those who have not been baptized and who will receive that sacrament along with their first Communion and confirmation at the Easter Vigil. To prepare for this, they become one of the “elect” in a public manner by asking for baptism and having their names written in the Book of the Elect.

Candidates have already been baptized and now desire full communion with the Catholic Church. They will receive their first Communion and confirmation at the vigil. Both catechumens and candidates have undergone a period of prayer and study, preparing their hearts and minds to join Christ’s Church.

The readings focused on the fulfillment of God’s covenant with His chosen people through the passion, death and resurrection of His Son, Jesus Christ. One reading was proclaimed in Spanish and the other in English, with translations provided in the program.

He then referenced the second reading, from St. Paul’s Letter to the Ephesians: “It’s really a hymn, a great prayer of blessing that St. Paul addresses to God the Father. It begins with these words: ‘Blessed be the God and Father of our Lord Jesus Christ, who has blessed us in Christ with every spiritual blessing in the heavens, as He chose … us in Him, before the foundation of the world, to be holy and without blemish before Him.’

“In God’s eternal design, we have this vocation to be holy,” said the bishop. “Well, only God is holy. So our vocation to holiness is a vocation to communion with God.” 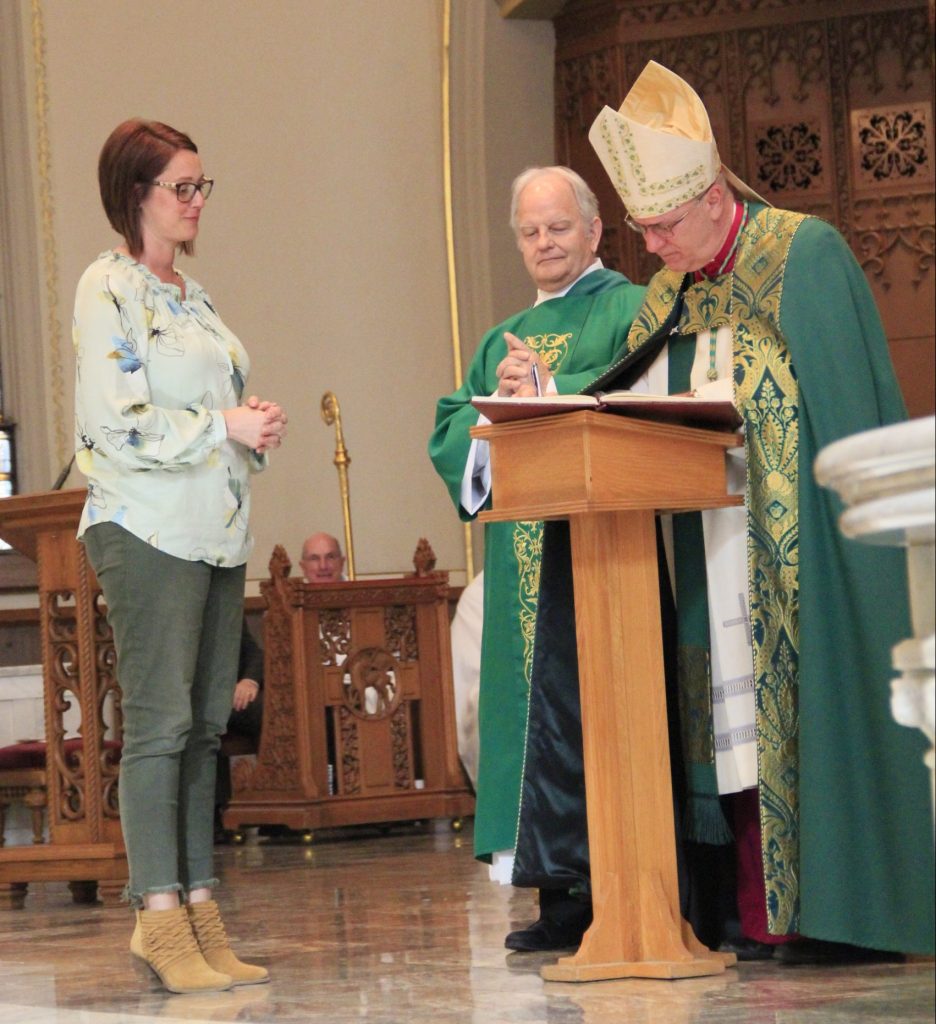 Bishop Rhoades writes the names of catechumens in the Book of the Elect presented to him during the Rite of Election.

The first reading, from Jeremiah, also emphasized God’s election of His chosen people, Israel, and the promise of the new covenant that He made with them. Through Israel, Bishop Rhoades said, God sent His Son, “who would be the Savior of all humanity. … In his Son, all would be chosen.”

All Christians are called to continued conversion. Jesus constantly invites the faithful to know, love and follow Him ever more deeply and boldly, proclaiming Him to all the world. This is part of Christian initiation, particularly for those who are already baptized and awaiting full communion in the Church.

Speaking to the candidates, Bishop Rhoades said, “You are already Christians. You already share in the Trinitarian life. You are already incorporated into Christ. In becoming Catholic, you will become more deeply united to Him and to His Church.”

The bishop then thanked those who played a part in bringing Christ to the catechumens and candidates, saying that he intends to pray for all of them throughout Lent. “And then, after Easter, I hope and pray that your life in Christ will continue to be nurtured by the sacraments and that you will be active members of the Church, the Body of Christ, all the days of your life.” 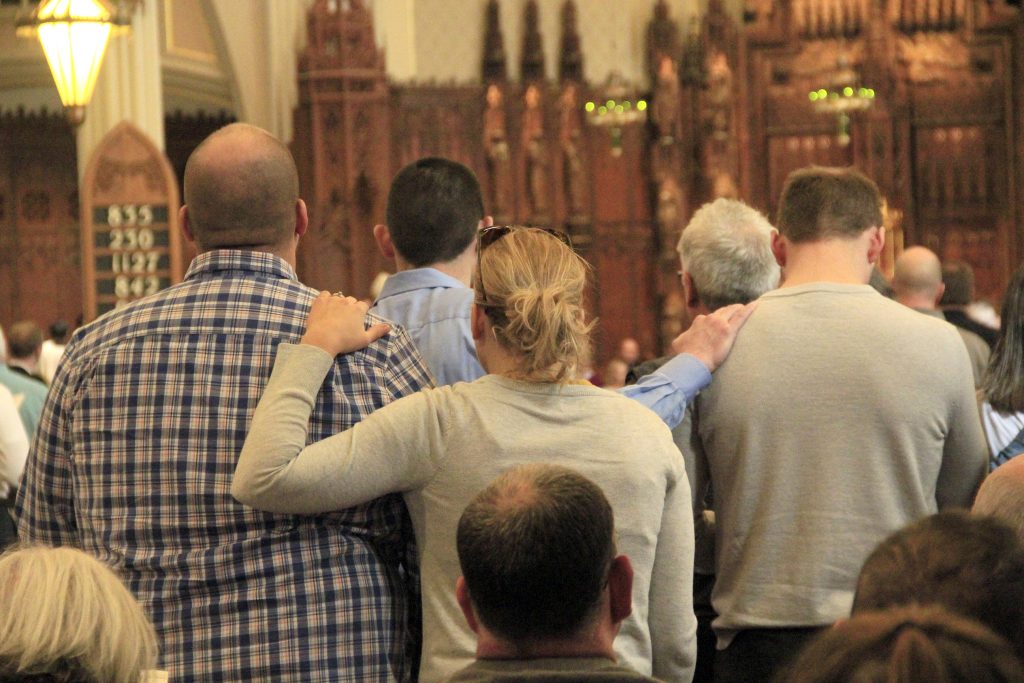 Photos by Jennifer Barton
A sponsor places her hand on the shoulders of a candidate, as the congregation prays over those seeking full communion in the Catholic Church, during the Rite of Election and Call to Continuing Conversion at the Cathedral of the Immaculate Conception in Fort Wayne Feb. 23.

Following the homily, the catechumens were presented to the bishop by their pastors or a representative from the parish. As their names were called individually, each catechumen stood with their godparents while Bishop Rhoades wrote their names into the Book of the Elect. Afterward, he addressed the godparents and catechumens, asking them to vocalize their response to God’s call and desire to enter the Church. With their personal affirmations, he declared them to be members of the elect.

The candidates for full communion in the Church were presented to Bishop Rhoades in the same manner. He stated, “The Christian life and the demands that flow from the sacraments cannot be taken lightly” and therefore asked for the testimony of the candidates’ sponsors.

The candidates then affirmed their desire to enter into the fullness of the Catholic faith.

A reception took place after  the rite at the Grand Wayne Center. There, the bishop greeted the candidates and the newly elect, expressing his intention to pray for them and wishing them well as they prepare to begin their journey in the Catholic faith.

Randal Krick, a candidate from St. Louis, Besancon Parish, New Haven, shared how he had been a Protestant for 32 years before turning to the Catholic Church. Last summer, Krick was attending Ohio Christian University to become a minister. While doing homework on the early Church and the Church fathers, Krick said he came to realize that the early Church “looked a lot like the Catholic Church.”

His girlfriend, Annette Sinn, began to send him videos of Father Michael Schmitz. “I came to the conclusion that the Catholic Church is the true Church.”

Coming from an evangelical, charismatic background, Krick said he was glad to see that the Catholic Church believed in many of the same things he did, including post-biblical miracles and the gifts of the Holy Spirit.