People who come to the diocesan Catholic cemetery in Fort Wayne are often filled with a sense of peace, tranquility and the hope of eternal life. For Steve Butler, these sentiments will be forever united with memories of dedication, generosity and gratitude, as he recalls the numerous ways his family has been blessed through their care for the deceased.

Multiple generations of Butlers have contributed to the maintenance and preservation of Catholic Cemetery. Steve’s grandfather, Thomas, served as superintendent from 1893-1933, while his father, James Sr., assisted in various capacities and eventually undertook the primary leadership role from 1953-65.

With great admiration, Steve recounted the steadfast commitment his relatives displayed to caring for those entrusted to their service. “When my grandfather was in charge, there were occasions of significant financial difficulty in the diocese. Yet, out of care and concern for his workers, at times he paid their wages out of his own pocket.” 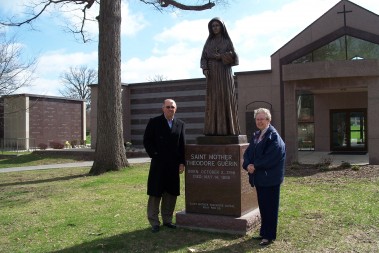 Sister Donna Butler of the Sisters of Providence of Saint Mary-of-the-Woods stands alongside her brother, Steve Butler, in front of the St. Mother Theodore Guerin Memorial Chapel at Catholic Cemetery, Fort Wayne, where their family home once stood. The cemetery grounds and features played a formative role in the lives of the entire Butler family.

This example of generosity passed on to the next generation, Steve remarked: “Likewise, throughout my father’s time at the cemetery, he worked 18 hours a day, seven days a week, doing everything from bookkeeping and grave digging to overseeing operations and maintenance. He always wanted to ensure that his workers were compensated fairly and received regular raises, before looking to meet his own needs.”

Appreciation for the cemetery also influenced the careers of other family members. James Sr.’s brother, William, served as a dedicated assistant for 50 years, while his son, James Jr., functioned as a dutiful historian, taking efforts to ensure that its legacy and beauty were honorably preserved. “Times were not always easy for my dad and my brother, but caring for the cemetery and everything in it was a ministry that meant more to them than words can ever describe,” Steve shared. 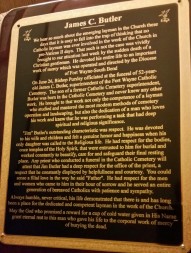 The words of Bishop John Crowley in honor of James Butler Sr., for his life of dedicated service and ministry to the Diocese of Fort Wayne-South Bend as superintendent of the Catholic Cemetery, are memorialized in a plaque located today in Cathedral Museum at the Archbishop Noll Catholic Center, Fort Wayne.

It was for this reason that at his father’s passing Steve chose to have a special plaque made commemorating James Sr.’s life and legacy, as attested to by his personal friend, then-Father Joseph Crowley (later Bishop Crowley), whose words of praise were also published in Our Sunday Visitor. Years later, in the midst of a conversation with Bishop John D’Arcy, Steve was overjoyed to hear that the plaque would be a welcomed addition to Cathedral Museum as the first item in the collection honoring a lay member of the diocese.

The influence of James Sr.’s passion for ministry also touched the life of his daughter in a profoundly transformative way. Witnessing her father’s service and loving care for both the living and deceased contributed to her desire to pursue a vocation to the religious life, which came to fulfillment as she entered the Sisters of Providence. Steve shared that this brought great delight to the family, especially to their father. “Even though she was his only daughter and he missed her terribly, he was so proud of what she did.”

Years later, to the joyful amazement of the family, upon the grounds where they had lived, the new St. Mother Theodore Guerin Memorial was constructed. This signified a lasting connection for Sister Donna, who had first felt the call to serve the Lord in Mother Guerin’s example on that sacred site. Reflecting upon her experiences, she crafted a short poem to capture how God made himself present in her early life: “In the shadow of death, a cemetery was the place I called home. In that dwelling place of saints gone before us, solitude and silence tasted like a banquet.”

Encountering God at the cemetery continued to be a reality for Steve, even after his family’s tenure there ended. Over 40 years ago, he and his former wife suffered the pain of losing a daughter at birth. On the occasion of a recent walk and conversation with a friend, he was encouraged to consider relocating her body to be with the other members of the family, as she had been originally been buried separately. Although it seemed improbable that her casket would be intact and free from decay after so many years, Catholic Cemetery Superintendent at that time, Tom Alter, agreed to proceed with the exhumation.

In what could be described almost as miraculous, Steve recounted that they “uncovered her casket and saw that it was in pristine condition and perfectly preserved. Her remains were surrounded by extensive tree roots, which had essentially guarded her for all those years. To remove her, the cemetery staff worked diligently with artistic skill, showing the utmost respect, with great carefulness and compassion. They allowed me to hold my daughter again as if it were yesterday. It was a moment I will never forget.” In gratitude, he presented the staff with a reflection plaque written from the perspective of his daughter, to remind them how impactful their efforts are, even in the moments when they might appear to go unnoticed or unappreciated. 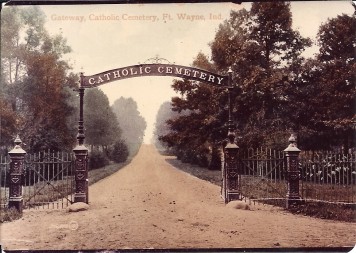 Such actions have reminded the Butler family of the truth of divine providence at work in everyday life. “In so many ways we have seen things come full circle and been blessed by God in abundance,” Steve concluded. “Seeing our family’s efforts recognized, and to receive such love and support from the church, has been genuinely humbling and provided us with a sense of both belonging and purpose. For this, we are truly grateful.”