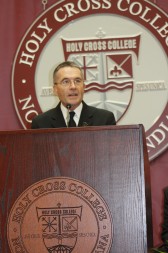 NOTRE DAME — Catholic identity is at the “top of the table,” says newly appointed Holy Cross College president, Holy Cross Brother John R. Paige. That, along with drawing more students and raising more money makes up the immediate agenda for Brother Paige as he prepares to lead the small liberal arts college founded in 1966.

Because he is currently serving a six-year term at vicar general of the Congregation of Holy Cross in Rome, Brother Paige will remain in Italy until he is able to return to Indiana to assume the presidency of Holy Cross College in January of 2011.

Brother Paige has had a long and highly accomplished career in education as a teacher, coach, athletic director, academic dean, principal, board member, president/ CEO and college professor, and is frequently involved as a workshop facilitator, speaker and consultant on religious, educational and school governance and accreditation issues. He has also served the Congregation of Holy Cross in the United States as master of novices.

Brother Paige says he is excited about building on the strengths he already sees at Holy Cross College, while also collaborating with nearby Saint Mary’s College and the University of Notre Dame. He also believes the school’s Catholic identity is its strength, citing a current report on vocations in Indiana, he says, “Forty-six young men are trying to discern their vocation to perhaps serve in religious life of Holy Cross … 46! Sixteen of them have matriculated in some way at this college. Sixteen of 46!”

“We give the same opportunity to all the men and women who are here at Holy Cross College. That’s contributing to Catholic identity, not only of the institution, but of the Congregation of Holy Cross and of the Church in northern Indiana and wherever these young people go, back to their own homes to work and be part of a family.”

“I’m just thrilled with the selection of Brother John Paige as our next president,” says Robert Kloska, vice president for mission advancement at Holy Cross College, pointing out that Brother Paige has worked in many parts of the world and knows most of the 1,500-member Congregation of Holy Cross by name.

Kloska notes, “He’s passionate about our Catholic and Holy Cross identity. He’s smart and articulate. He’s experienced and highly educated. And he started his whole religious life right here at Holy Cross College. Seriously, how could you find a more compelling leader?”

In his doctoral work, Brother Paige’s dissertation research focused on educational institutional development in Uganda, East Africa, where he served as visiting professor of social science at the Philosophy Centre, Jinja, and adjunct professor on the faculty of education at Makerere University. He also wrote a book about the experiences of the Congregation of Holy Cross educators during Uganda’s brutal civil war, “Preserving Order Amid Chaos: The Survival of Schools in Uganda, 1971-1986”.

From 1999 to 2004, Brother Paige served at St. Edward’s University, Austin, Texas, as associate professor and dean of the School of Education, and as a member of the board of directors of the Southwest Educational Development Laboratory (SEDL), the board of trustees of Stonehill College (Massachusetts), the board of governors of the Holy Cross Institute, a commissioner-at-large and president of the Texas Catholic Conference School Accreditation Commission, and as a regional associate of the National Catholic Educational Association Secondary Schools Department.

“We feel that Holy Cross College has been truly blessed to find a new president of the caliber and experience of Brother John Paige,” says chairman of the Holy Cross College Board of Trustees, Jerry Love. “He comes to us at a time of growth and progress on many fronts as well as many new challenges.”