BROOKLYN, N.Y. (CNS) — The nation “can never forget” the 9/11 tragedy “that shook the foundations of our society and our trust in our government to protect us,” Brooklyn Bishop Nicholas DiMarzio said in his Sept. 9 column in The Tablet, the diocesan newspaper.

“As a city and as a nation, we all put out into the deep waters of post-9/11 remembrance,” he wrote, echoing the name of his column, “Put Out Into the Deep.”

“We remember those who were killed, those who survived, those who came to their rescue, and those who sacrificed themselves in many ways then and now. We can never forget this tragedy, which marked a turning point in the understanding of our society of national security and pride,” he added.

He asked Catholics to join him in prayer Sept. 11, the 19th anniversary of the terrorist attacks that claimed the lives of nearly 3,000 people in New York City, in a field near Shanksville, Pennsylvania, and at the Pentagon in Virginia, across the Potomac River from Washington. The anniversary also is called Patriot Day.

“We must continue our efforts to defend the security of our country from forces of external and internal origin. Without such security, we can never assure peace, a peace that allows us to live as God intended,” Bishop DiMarzio said. 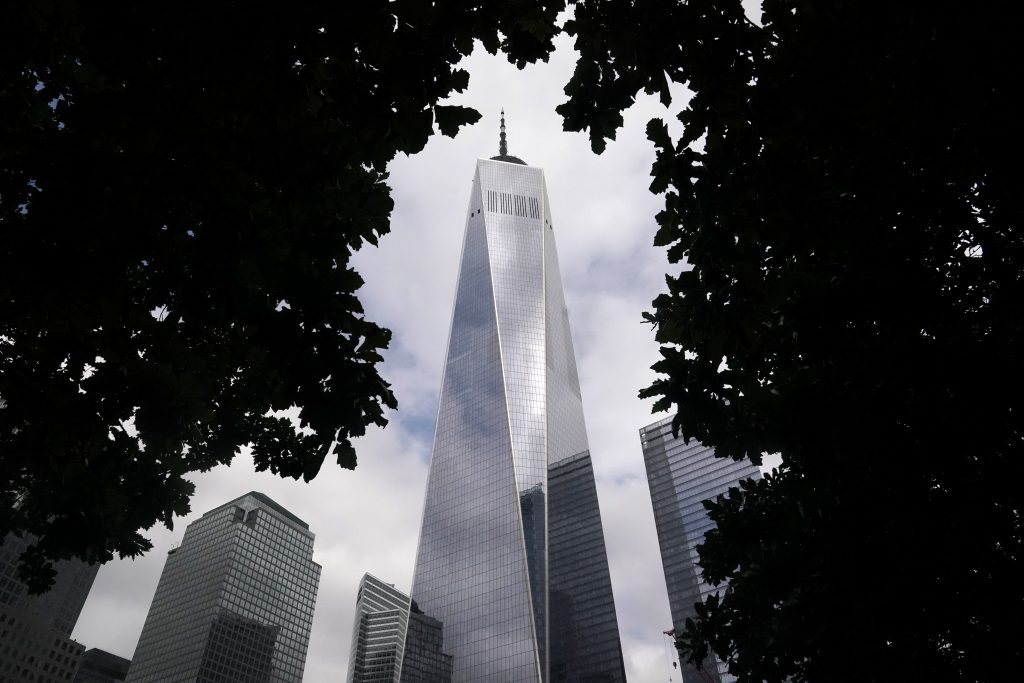 The One World Trade Center Tower is seen from the 9/11 Memorial in New York City Sept. 11, 2020. The building stands at the site of the former World Trade Center, which was brought down by terrorists in a 9/11 attack. (CNS photo/Carlo Allegri, Reuters)

Early in the morning on 9/11, terrorists flew two passenger planes into New York’s World Trade Center, destroying the twin towers that were finally completed in 1975 after years of construction. The towers in lower Manhattan became iconic buildings almost instantly after their completion and had helped define the skyline for years to come.

The New York attack was followed quickly by terrorists flying a passenger plane into the Pentagon. A fourth passenger plane, United Airlines Flight 93, was initially headed toward Washington, but crashed into a field near Shanksville after passengers thwarted the hijackers.

In addition to 2,977 fatalities resulting from the attacks, over 25,000 other people sustained injuries and many people have suffered substantial long-term health consequences.

Bishop DiMarzio in his column noted the bravery that first responders displayed the day of the attacks. New York City police chaplains Msgr. Robert Romano and Msgr. David Cassato and New York City fire chaplain Msgr. John Delendick and many other priests of the Brooklyn Diocese also “ran to that awful scene in lower Manhattan,” he said.

“They went to assist in a time of recovery efforts, not only to minister to the survivors, but also to minister to the first responders,” he said. “We must never forget the sacrifice and heroism of so many on that day and in the weeks that followed.” 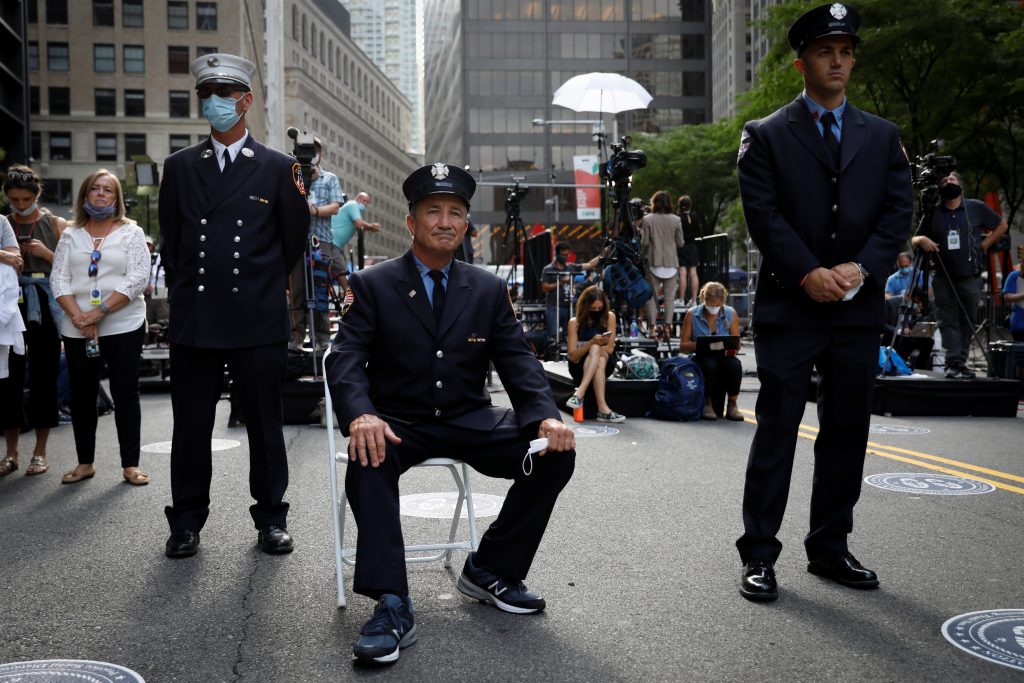 At least one Catholic chaplain lost his life that day: Franciscan Father Mychal Judge, a beloved New York City fire chaplain who died ministering to victims in the rubble of the World Trade Center’s twin towers.

The saga of 9/11 continues in the ongoing health consequences many suffer to this day, Bishop DiMarzio said.

“People still lose their lives to cancer and related illnesses caused by their simply being at or near ground zero in the wake of the World Trade Center attacks,” he said.

“Over 110 New York City firefighters have reportedly died of their 9/11 injuries since Sept. 11, 2001. And more are expected to die of these illnesses in the coming years. More than 7,000 FDNY firefighters and EMTs have been treated for a 9/11 injury or illness, now 19 years later,” he said.

Bishop DiMarzio said the World Trade Center Health Registry of the New York City Department of Health “suggests that post-traumatic stress disorder symptoms are the most common effect of 9/11.”

“As we can clearly see, the effects of the Sept. 11, 2001, attacks on our nation continue to today. All of them bring about memories we thought we could forget as time goes on. This is, however, a reminder that the safety of our nation depends on the vigilance of our government and of every citizen,” he added.

Like most Americans, Bishop DiMarzio said he remembers exactly where he was on 9/11 — he was in Washington to attend an administrative board meeting of the U.S. Conference of Catholic Bishops.

“As the meeting began, we heard planes flying over Washington in an effort to protect the White House, following the plane that flew directly into the Pentagon,” he recalled.

“We all will never forget seeing the vivid scenes on television of the crumbling of the twin towers,” he said. “This was even more vivid for those who were there at the time, the first responders, all those who responded to assist those in need, and all those who lost relatives on that terrible day.”

He expressed disappointment that state and federal COVID-19 restrictions prevented the traditional annual event that brings together relatives of the 2,977 people “killed on that fateful day” on the memorial plaza in lower Manhattan.

“We have been told that ‘out of an abundance of caution and in line with the guidance regarding social distancing,’ family members will not have an opportunity to give a personal tribute on stage to those whom they lost,” he said. “In many cases, doing so brings some closure to the terrible memories of 9/11.”

The COVID-19 restrictions prevented the reading of the names of all the victims at the National September 11 Memorial and Museum.

When the museum said it would instead play a recording of the names from its “In Memoriam” exhibition, the Tunnel to Towers Foundation invited 9/11 victims’ families to take part in a memorial ceremony at ground zero for the reading of the names. The foundation was created by the siblings and other family members of New York firefighter Stephen Siller, who gave up his life to save others on 9/11.

City officials also canceled the Tribute in Light, which beams into the sky from the location of the destroyed towers, but Bishop DiMarzio noted that a contribution from former New York Mayor Michael Bloomberg allowed the light installation to continue this year.

“Throughout my tenure as mayor, the Tribute in Light was a powerful symbol of New York’s recovery after 9/11. I am pleased that once again it will shine this year as a beacon of our city’s resilience,” Bloomberg said in a statement.

President Donald Trump and first lady Melania Trump visited the Flight 93 Memorial in Shanksville. In his remarks, he prayed tribute to “the heroes of Flight 93,” whose actions he said “are an everlasting reminder that no matter the danger, no matter the threat, no matter the odds, America will always rise up, stand tall, and fight back.”