History, once lost, cannot be rediscovered; it can only be speculated upon. So Wabash County Associate Historian Michael Thompson and St. Bernard Parish secretary Ann Unger have been working hard to keep a piece of local history remembered and documented with a newly published book, “History of St. Bernard Church 1864-2020.”

According to Thompson, the project was a joint effort between him and Unger that began around 2008. Unger, who has been secretary since 2003, was aware of a previous written history of the Wabash parish, but nothing had been updated since 1975.

“It was a dream — a long-ago dream,” to update the parish’s history, Unger said. And she knew just who to ask for help with the work. 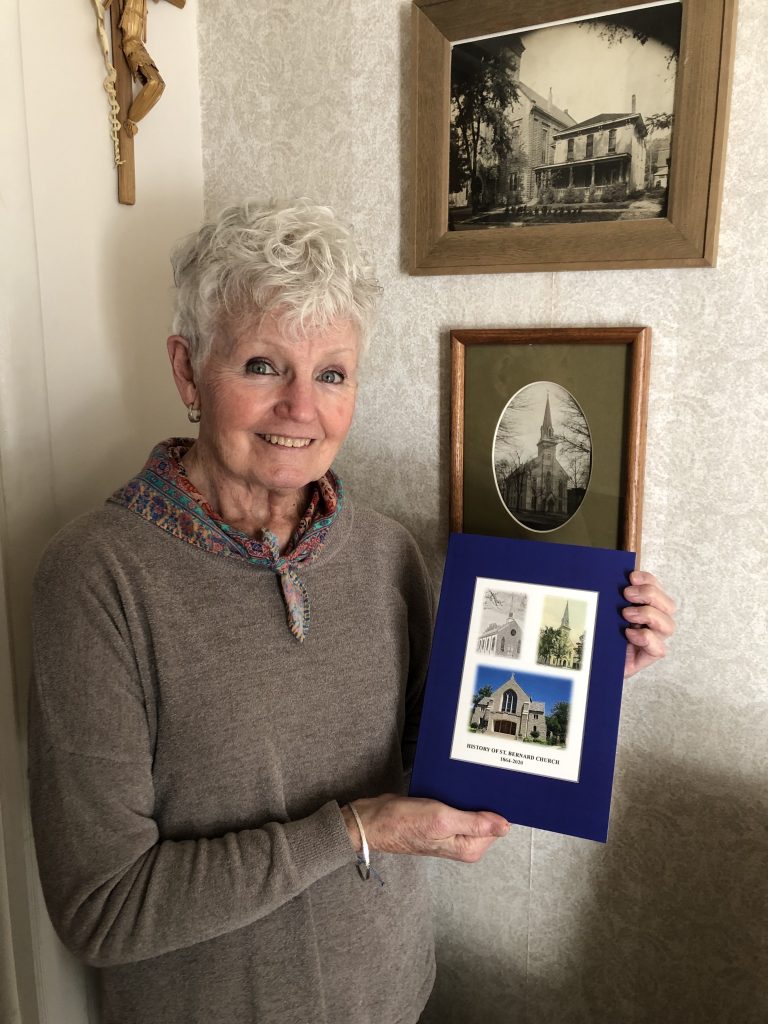 Erika Barron
St. Bernard Parish secretary Ann Unger shows the cover of the newly published book, “History of St. Bernard Church, 1864-2020.” The book was a collaboration between herself and Michael Thompson, parishioner and associate county historian.

Completion was initially slated to coincide with the parish’s sesquicentennial in 2014. With Thompson volunteering his time researching parish history and some unexpected delays, including the passing of former pastor Father Sextus Don, work was incomplete at that time and the book only came to publication last year. The delays, while unfortunate, allowed Unger to add more photographs and snippets of history.

Thompson began his research with the 1975 booklet written by a former curator of the Wabash Historical Museum and member of St. Bernard. “From there, it took on a life of its own,” Thompson stated.

Digging up the past can be a difficult venture, though. Oftentimes, there are few records of people, places and events that make up a significant chunk of history. This is frequently the case especially for churches, whose records are subject to things like fires or poor archiving. Of the amount of research involved in putting St. Bernard’s history, “It was like a jigsaw puzzle – a piece here and a piece there,” Thompson stated. 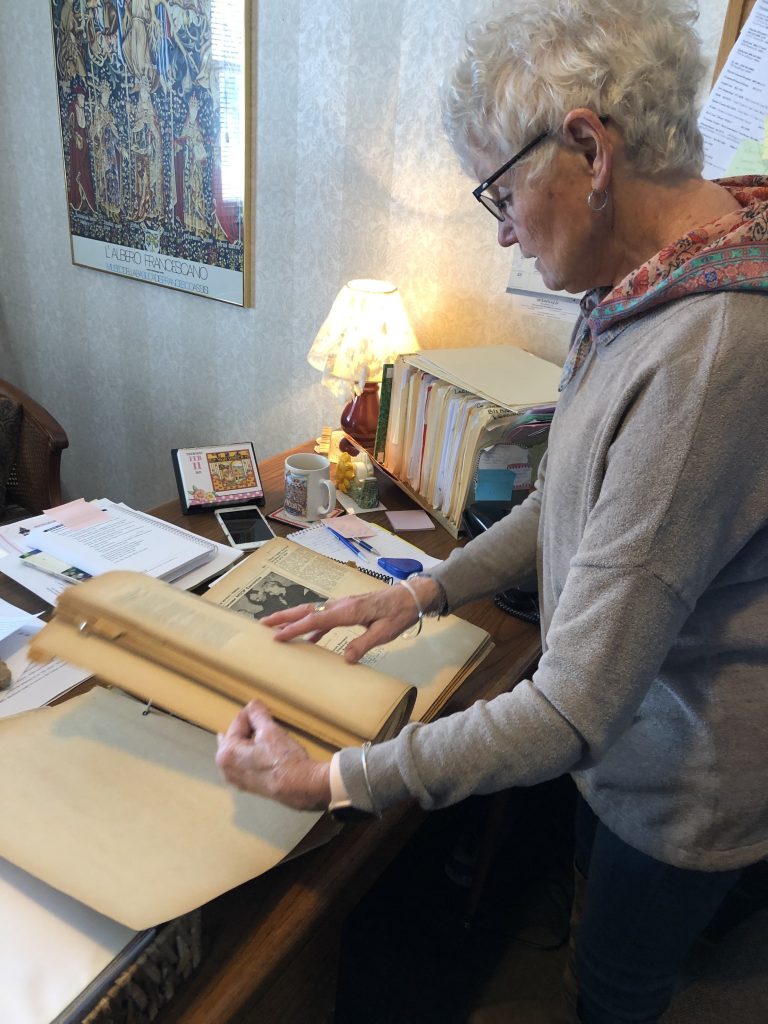 Ann Unger reviews some of the preserved news clippings and other church information used.

Unger had special archives to turn to: scrapbooks kept by previous parish secretaries, whom she stated kept “excellent, detailed records.” Freda Reardan began this practice decades ago, and Rita Fedewa continued the work of collecting newspaper articles, committee meeting notes and photographs. Today, the parish has a closet full of these scrapbooks. They proved to be excellent primary sources for Thompson to delve into. He also gives credit to Janice Cantrell, archivist for the Diocese of Fort Wayne-South Bend, for her assistance in filling in some of the gaps.

One aspect of the book that Thompson is particularly pleased with are the profiles and pictures of every priest who served at St. Bernard Parish. The internet was an invaluable resource for Thompson and Unger when searching for photos of the parish’s earliest priests.

The effort was not solely Thompson’s and Unger’, though. “I asked for help from the parish,” Unger stated, noting that many parishioners came forward to identify people in the numerous photos as well as telling their personal stories. Parishioners Bob Martin and John Schetzsle visited Unger in the parish office to share their beautiful and often humorous memories of the parish and school, which Unger then recorded for posterity.

Even the current pastor of St. Bernard contributed. Father Sextus had passed away before he had been able to interpret the symbolism in the stained glass windows, causing the writing of the book to stall. When Father Levi Nkwocha arrived in 2018, Unger gave him a tour of the church and asked him: “What do you see in that window?” With his background in theology from the University of Notre Dame, Father Nkwocha was able to give a detailed description of the symbols used in the windows.

“For me as a theologian, I didn’t see an impasse. I simply applied what I had learned,” he stated. Prior to publication, Father Nkwocha even assisted in editing the section on the windows.

After several rounds of proofreading and editing, the parish was finally ready to take the completed manuscript to a private bookbinder in North Manchester in December. All that parish members expect to gain from publication is for anyone with an interest in local history to own a record of the parish’s history — and to remember it.

In his years as a historian, Thompson admitted, he has only seen around five parish history books in public libraries. He would like to see that change.

Thompson has served as associate historian for over a decade, a position that is appointed by the county historian under the Indiana Historical Society. His interest in history was piqued when his seventh grade teacher discovered that he was a direct descendant of Francis Slocum, a white woman who had been captured by Native Americas and eventually assimilated into the Miami tribe. From that time onward, Thompson became enamored of local history.

Unger described him as very detailed and meticulous – perfect for the job of recording St. Bernard history. “I like to promote history,” Thompson said. “I thought the history needed to be done; it definitely needed to be updated and further expanded.” 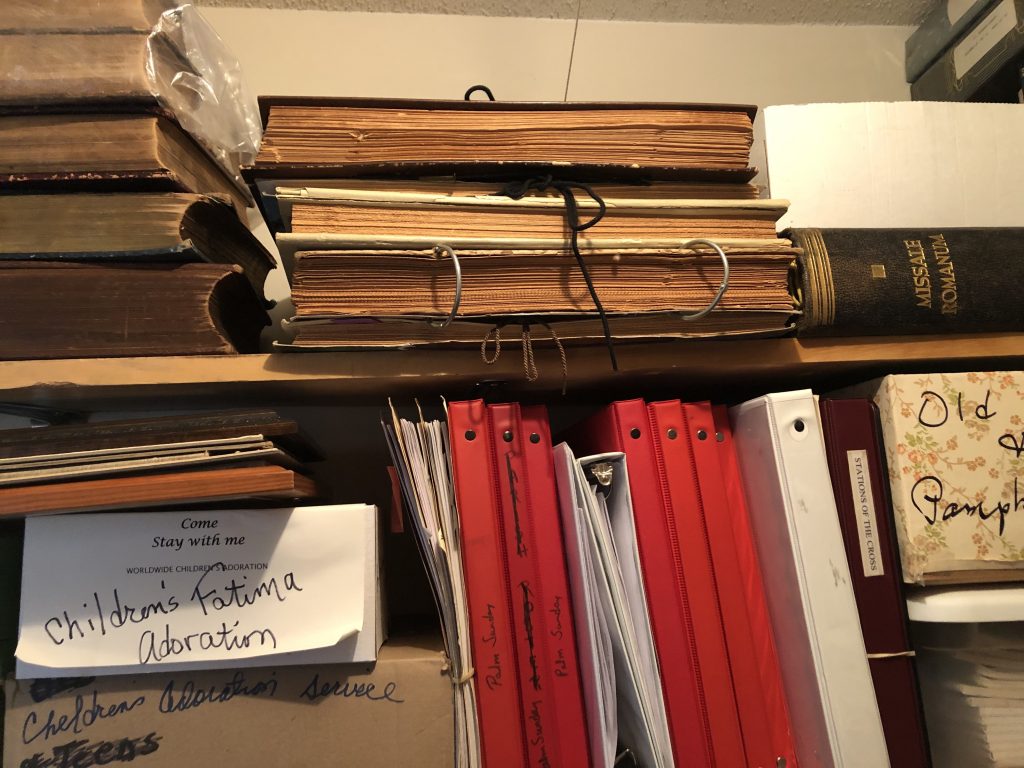 The multitude of books and clippings archived at St. Bernard Parish.

Keeping that history alive is of great importance to Thompson and Unger. “I think it’s important to know where we come from,” Unger said. Thompson agreed, adding, “It is the people that make the parish. It’s what the people of St. Bernard’s contributed; how they made history.”

One such contribution came during the flood of 1913. St. Bernard opened its doors to anyone who needed assistance, providing food and shelter to those displaced by floodwaters. Thompson commented, “It brought the community together — not just Catholics were affected.”

During their research, Thompson and Unger also discovered where the parish’s name came from. They had not been able to figure it out before. But in one of the county recorder’s documents, a key date in the signing on the property was the feast day of St. Bernard of Clairvaux. They assume that this is where the name originated.

Father Nkwocha is pleased to bring the final product to his parishioners, and challenges other parishes to consider recording their own histories. “It is a rich document, a book that anyone can read.”

“History of St. Bernard Church” is only available to purchase through the parish office, though Thompson has donated copies to several local libraries to add to their collections.