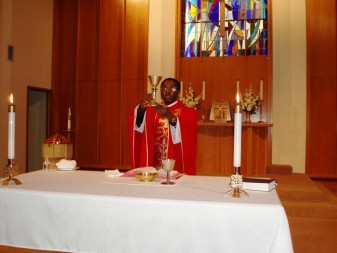 Father Francis Chukwuma celebrates Mass on Saturday morning, June 29, during his final weekend as pastor of St. Joseph Church in Bluffton. He traveled to Rome to begin three years of studies intended to lead to a doctorate in canon law.

BLUFFTON — Emotions flowed the weekend of June 29-20, as Catholics in the Bluffton area observed the departure of the pastor of St. Joseph Parish, Father Francis Chukwuma. Father Francis, as most know him, was scheduled to leave for three years of studies in Rome intended to lead to a doctorate in canon or Church law.

St. Joseph Parish held a farewell luncheon on June 30 where many parishioners shared a mix of feelings, including sadness at losing Father Francis as their pastor of almost four years, but happiness for the opportunity that he will have in furthering his studies.

Becky Jackson, who has served as a member of the parish pastoral council, fought back tears in discussing the change. “He’s such a kind and understanding person,” she said. “He’s very easy to work with.”

Reflecting June 29 following morning Mass, Father Francis said his time in Bluffton has “been a wonderful experience.” Father Francis said he realizes the “intonation and syntax” of his speech makes it clear he did not grow up in northeastern Indiana, and yet the parish and community have been very welcoming to him. “That openness brought out the best in me,” he said, and he hopes that he also has helped to bring out the best in members of his parish.

During his tenure at St. Joseph there have been improvements to the interior of the church facility, including installation of a new sound system. Small faith-sharing groups have been created through the Arise Together in Christ program, numerous youth service projects have been completed, and the local parish is on the Internet with its own Web site.

John Horn, who has served as president of the parish pastoral council, told those at the farewell luncheon Sunday that the pastor has made a significant difference within the parish. “We’re going to reap the benefits of Father Francis for years to come,” said Horn.

Father Francis said he has been overwhelmed by the reactions from parishioners at the news of his departure. “They have been happy that you’re going for something good, but sad too,” he said. He hopes to remain in contact, while he realizes that he is unlikely to be able to return to pastor the St. Joseph congregation after his studies. Visiting priests will celebrate the three main Masses each weekend during July and until a new pastor is assigned to the Bluffton parish.

Already considered a canon lawyer, Father Francis has served as one of the judges in the Marriage Tribunal for the Diocese of Fort Wayne-South Bend for about six years. The tribunal helps area Catholics who seek an annulment examine whether their sacramental marriage was valid or not. He also has served as an appeals judge for the Lafayette diocese’s tribunal.

Father Francis has the equivalent of a master’s degree in canon law now, he said. His additional studies were recommended by the bishop of his home diocese in Nigeria. Father Francis has been on loan to the Diocese of Fort Wayne-South Bend. Before coming to the United States, Father Francis had been a parish priest for five years in Nigeria while also serving as a judge for two marriage tribunals there.

Father Francis will be taking classes at Pontifical Gregorian University in Rome, an alma mater of Bishop Kevin C. Rhoades. Father Francis had an opportunity to visit with Bishop Rhoades and learn of his experiences at the university on June 28.

Before he can actually begin his additional studies in canon law, however, Father Francis will need to immerse himself in learning the Italian language. In addition to speaking English and some local languages of his native Nigeria, he learned Greek and Hebrew in his previous studies. He also spent a year teaching French and Latin.