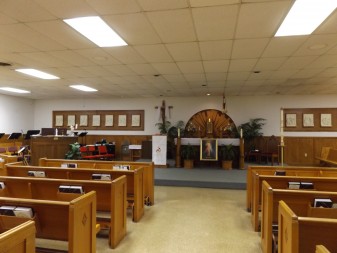 The sanctuary of Blessed Sacrament Church in Albion. The church is located on State Road 9.

ALBION — Blessed Sacrament Parish has had a somewhat difficult history at times over the years — it’s literally been knocked down — but has come back and is now planning a new building project.

The parish started in 1875 and was founded as Sacred Heart Church, located on East Hazel and First Streets in Albion. It was a little wooden clapboard church with approximately twelve families making up the parish. Originally a mission church from St. Mary’s in Avilla, the mission was transferred several times over the years to Ege, Auburn and then after 1903 to Kendallville. The most Reverend John Noll was once a priest for Blessed Sacrament before becoming Bishop for the diocese and Father Francis Ege was known to sometimes walk 17 miles in subzero weather from Ege to Albion to celebrate Mass. The last Mass was celebrated in 1924. In 1929, the building was dismantled and the wood used to build summer homes. 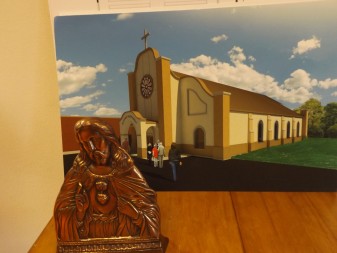 This is an artist’s rendering of the soon to be built Blessed Sacrament Church in Albion. The statue in front of the painting of the Sacred Heart of Jesus is notable as the first parish in Albion was Sacred Heart. Ground is to be broken in March to start building the new church.

Current pastor, Father J. Steele, CSC shared that in the 1930’s; “during the height of the KKK and anti-Catholicism” a pastor of a Methodist Church in Lagrange wanted to help dispel the myths about Catholicism so he invited a priest to speak at an open house for several denominations. At the meeting, Father William Ehrman from Kendallville was asked by 28 Catholics from Albion and LaGrange in attendance about re-establishing their parish.

The Oblate Missionary priests then came from Boston to celebrate Mass in Albion and Ligonier from 1934-1969. Until a new church was built, Mass was celebrated in Albion in a room above the post office.

In 1941, a new stone church was built in the Albion courthouse square. By the 1980’s 200 families were attending with more during the summer. According to Father Steele, by 1993, the county wanted that property for parking while the current property had been on the market for a long time, so a move was made. The current church property includes over six acres so there is plenty of space to build the new church.

Father Steele divides his time between Blessed Sacrament and St. Joseph parish in LaGrange. He said when he came to the parish in 2012, there were 95 families. Now there are 125 registered households and according to Parish Secretary Pam Edwards, “We’re still growing.”

“We are thriving with activity; there’s always something going on,” Father Steele said. 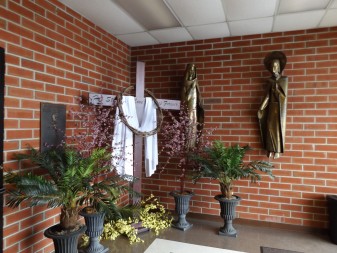 The entranceway of Blessed Sacrament Church in Albion is nicely decorated, welcoming visitors to the church.

Blessed Sacrament has a choir, RCIA, youth formation classes (CCD), Rosary Sodality, Youth Group and more. Rosary Sodality is very active and hosts a lot of dinners, including all the funeral dinners, receptions for First Communion and Confirmation. Recently a steak dinner co-hosted with the youth group was held and the youth group held a basket auction during the dinner. The Rosary Sodality uses funds raised to purchase new vestments, altar cloths, etc. for the church.

The parish also holds trivia night fundraisers for members of the parish who are in need. Edwards describes the parish as close knit and members enjoy getting together for fellowship.

“We are the eating-est parish you ever met!” she laughed.

Besides eating, many of the parishioners also like to sew and knit. A “Stitchin’ Sisters” ministry was born and every new baby baptized in the parish receives a baby quilt and new parishioners receive knitted dish cloths in their welcome packet.

Father Steele agreed that the strong point of the parish is hospitality. “We do hospitality well here,” he said.

Father Steele said the focus the last few years has been preparing for the building project but last year he was able to bring a retreat to Blessed Sacrament that he’d been wanting to be a part of for many years — the Alpha program. He was excited when he received the news from the diocese that the program was coming here because he’d heard such good things about it. Blessed Sacrament joined with other local parishes and they had over 100 people attend each Sunday. Father Steele said that even though the Alpha program initiated from the Protestant church, he thinks it is even more effective in a Catholic setting.

“Because Catholicism has so many levels, we rarely talk about the basics — Alpha teaches us how to do basic evangelization,” he said. “People that are most likely to become Catholic are those who’ve been introduced to it in some way — like visitors at funerals (for example).”

Father Steele said he’d like to have more retreat programs like Alpha. “My own faith was formed by going on retreat while at college,” he said.

Father Steele also felt that the adult religious education offered at Blessed Sacrament has been well attended. Aside from Alpha, they recently offered Symbolon and are beginning a Bible study based on  Dr. John Bergsma’s Bible Basics for Catholics — another program he “highly recommends.”

This summer the parish is planning on building a Stations of the Cross walk through the woods on the property.