CLOUD, Minn. (CNS) – Fathers Casey Cole and Roberto “Tito” Serrano, both Franciscan friars, met in their second year of formation and bonded over their love of baseball and their Franciscan vocations.

As kids, they both dreamed of visiting Major League Baseball stadiums around the country. Now the dream becomes a reality as the “Bleacher Brothers” hit the road.

After eight years of planning, they set out on an 11-week pilgrimage on May 19 to visit all 30 Major League Baseball ballparks, traveling more than 17,000 miles to meet people where they are and preach the good news of Jesus Christ.

The first stop on their itinerary was Miami to see the Marlins play the Atlanta Braves on May 20. They will stop in Minnesota on June 24. The tour wraps up in Colorado with the Rockies vs. the Los Angeles Dodgers on July 30. 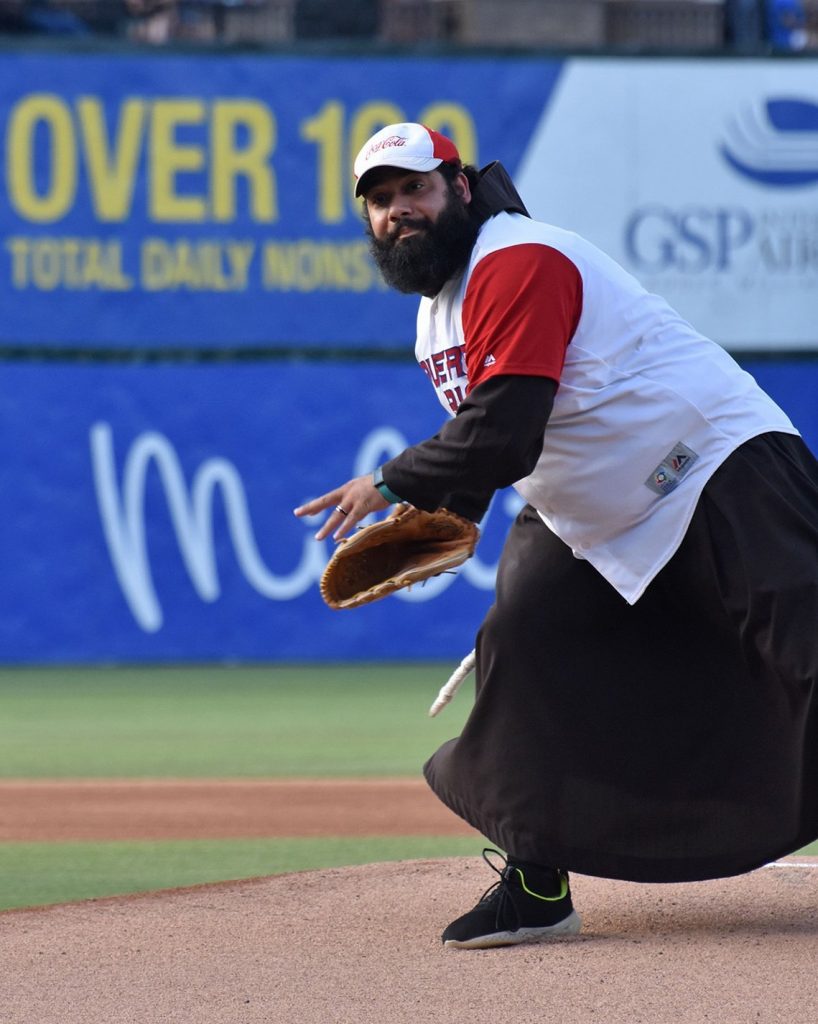 Franciscan Father Roberto “Tito” Serrano, who is assigned to Siena College in Loudonville, N.Y., is seen in this undated photo. (CNS photo/courtesy Father Casey Cole via The Central Minnesota Catholic)

“In formation we learned about the history and tradition of the Franciscans,” Father Cole told The Central Minnesota Catholic, St. Cloud’s diocesan magazine. “We heard stories about St. Francis preaching and evangelizing, and how he didn’t necessarily go to churches. He went to the city streets to preach where people were, and he preached a language they could understand.”

Father Cole, a chaplain at Mount de Sales High School in Macon, Georgia, and Father Serrano, who is assigned to Siena College in Loudonville, New York, knew they wanted to do something similar, but not actually go out into the streets. They wanted to go where people gather.

“So being baseball fans, Tito and I thought, let’s go to the other cathedral,” Father Cole said. “We’ve got the cathedral, the church, but the secular cathedrals really are stadiums. The idea was planted that once we became priests, once we had the ability to travel a little bit, we’d do it.”

They will be in the stands for games in each city, connecting with others who share their love of baseball. They also will celebrate Masses and visit Catholic schools, parishes and dioceses for talks along the way.

“St. Francis didn’t just preach in churches,” Father Cole said. “He had a gift of finding God in even the ordinary. For 800 years, the Franciscans have continued this legacy. This trip is our way of carrying on what St. Francis started.”

The two will make their first trip to Minnesota to see the Twins play the Rockies at Target Field in Minneapolis on June 24. The following day they will celebrate Mass at Immaculate Conception Parish in Columbia Heights, Minnesota, and then make their way to St. Paul, Minnesota, for a town-hall-style talk at the Cathedral of St. Paul.

“We’ll go to the stadiums, but then invite them home,” Father Cole said. “So, we’ll have Masses and we’ll have talks. I think we have about 30 talks planned and then a handful of Masses. We don’t want to just have all the fun, but offer some fruit as well.”

They will do a traditional talk or a town-hall format. It’s up to the hosts to choose, but the priests prefer the town hall, Father Serrano said.

“We’re at our best when we’re just talking and when we’re able to banter and argue and debate and just engage in normal conversation the way everyone else does,” he said. “I think that’s what allows us to kind of lessen the distance between us.”

“Just because someone’s religious or ordained a priest doesn’t necessarily mean that there’s now this chasm between us,” he said. “We’re all children of God, and we’re all called to be in relationship with each other and that means intimacy and that means arguing sometimes.”

Baseball also is a good bridge between the secular and the sacred, Father Serrano said.

“I think that this allows us to number one, find places where a large number of people are gathered, but also at the same time broach the subject of why we are creating this sort of false distance between what is considered secular and sacred,” he said. “Really, God is in all.”

Aside from the evangelization mission, the “Bleacher Brothers” are excited to see their favorite teams and players and visit different parts of the country on this trip.

Father Serrano is originally from Florida, so he started out as a Marlins fan. When the family moved to Arizona, his father, who was a die-hard baseball fan, announced that they would then be Diamondbacks fans. “My father spoke, and it was so,” he said.

Father Serrano also is hoping to meet one of his favorite players, Javier Báez, shortstop for the Detroit Tigers. He and Father Cole have field passes for their game in Detroit, so it may happen.

Father Cole said he was a Yankees fan growing up, but lost interest in the team after shortstop Derek Jeter retired.

“I decided after a number of years of being a Yankees fan, to go the other direction, go National League with the lovable losers. So, I’m a Cubs fan and wouldn’t you believe it within a year and a half, they won the World Series (in 2016).”

Father Cole said exploring each city also is something they are looking forward to. Going to the big churches and seeing the cities and eating the food and just getting to know the faith and culture of people is important too, he said.

“I want to see how Catholicism has been shaped (in each city we visit) by the culture, by the different immigrant groups that have come,” Father Serrano said. “How does the Church play into these different cultures and how is it expressed now? I’m literally looking forward to that experience as well.”

Father Cole hopes that being out in public in their habits will encourage people to ask questions, he said.

“I really just want people to know that if they see us, come up and talk to us,” Father Serrano said. “That’s why we’re there. We’re going to be in our habits the whole time so that we can be visible. Let’s chat and let’s have an encounter with one another.”

Towalski is a multimedia reporter for The Central Minnesota Catholic, the magazine of the Diocese of St. Cloud.