WASHINGTON (CNS) — Bishops from throughout the world gave high marks to Pope Francis’ new apostolic exhortation “Querida Amazonia,” taking note of the care with which it was crafted to include the Amazon region’s distinct characteristics and its message for the worldwide Church.

“Today our Holy Father Pope Francis offers us a hopeful and challenging vision of the future of the Amazon region, one of the earth’s most sensitive and crucial ecosystems, and home to a rich diversity of cultures and peoples,” said Archbishop Jose H. Gomez of Los Angeles, president of the U.S. Conference of Catholic Bishops, in a Feb. 12 statement.

“The pope reminds us that the Church serves humanity by proclaiming Jesus Christ and his Gospel of love,” the prelate said, “and he calls for an evangelization that respects the identities and histories of the Amazonian peoples and that is open to the ‘novelty of the Spirit, who is always able to create something new with the inexhaustible riches of Jesus Christ.’”

Archbishop Gomez added, “He also calls all of us in the Americas and throughout the West to examine our ‘style of life’ and to reflect on the consequences that our decisions have for the environment and for the poor. Along with my brother bishops here in the United States, I am grateful for the Holy Father’s wisdom and guidance and we pledge our continued commitment to evangelizing and building a world that is more just and fraternal and that respects the integrity of God’s creation.”

“Querida Amazonia” (“Beloved Amazon”) is divided into four chapters, each one focusing on a specific “dream” — social, cultural, ecological and ecclesial — each of which were dimensions presented during October’s Synod on the Amazon. Dated Feb. 2, the feast of the Presentation, it was released Feb. 12 at the Vatican. 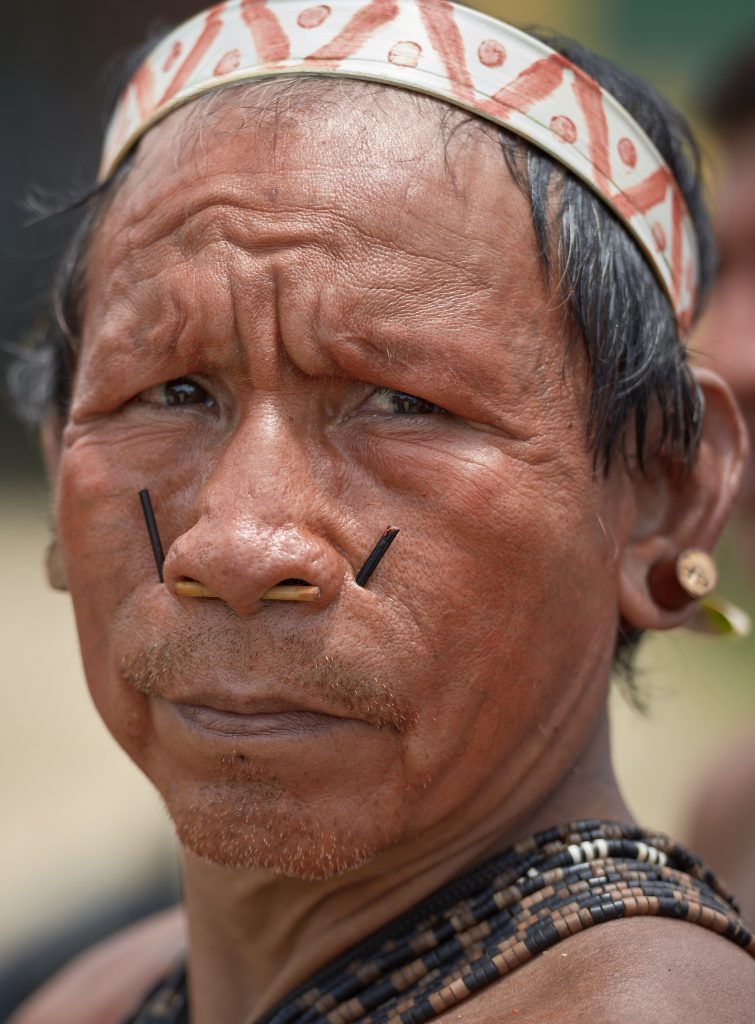 In the apostolic exhortation, Pope Francis declared that the Amazon region is “facing an ecological disaster” and that its people are “witnessing an increase of xenophobia, sexual exploitation and human trafficking.”

“Cities, which should be places of encounter, of mutual enrichment and of exchange between different cultures, become a tragic scenario of discarded lives,” Pope Francis said, yet “the Amazon region has become a source of artistic, literary, musical and cultural inspiration.”

The pope noted, “The Amazon is also the spinal column that creates harmony and unity,” but acknowledged, “Sadly, many of those living in the Amazon region have acquired habits typical of the larger cities, where consumerism and the culture of waste are already deeply rooted.”

Pope Francis said, “An authentic option for the poor and the abandoned, while motivating us to liberate them from material poverty and to defend their rights, also involves inviting them to a friendship with the Lord that can elevate and dignify them. How sad it would be if they were to receive from us a body of teachings or a moral code, but not the great message of salvation.” 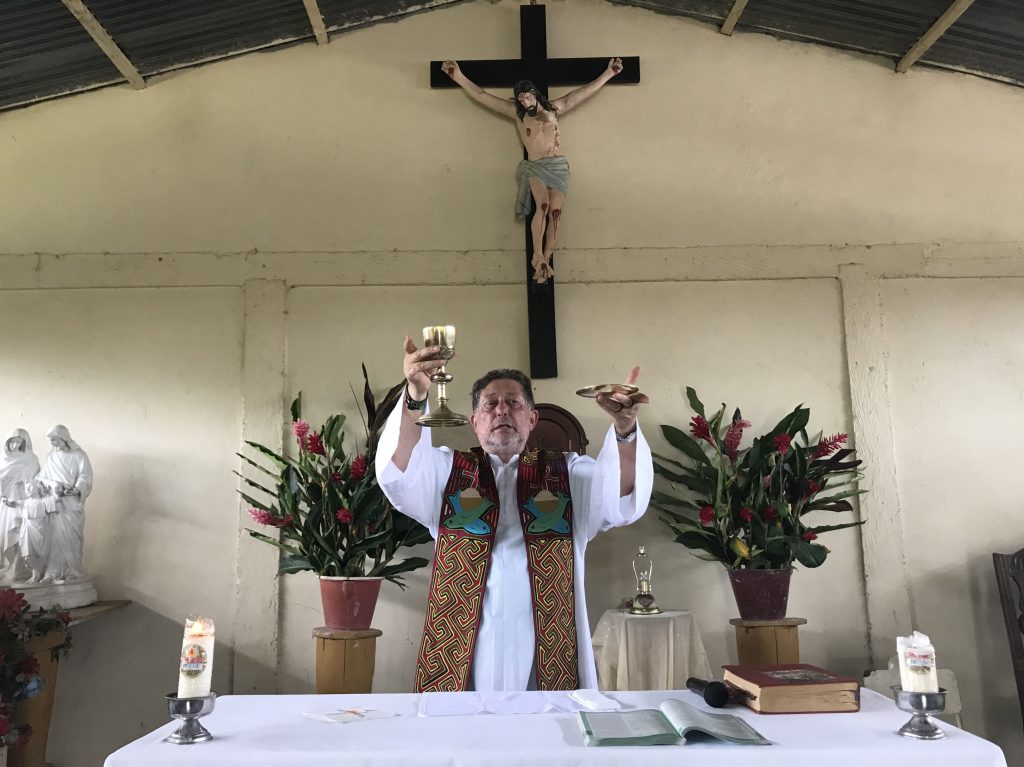 Jesuit Father Alfredo Ferro celebrates Mass July 14, 2019, in the indigenous community of Nazaret, Colombia. In Pope Francis’ postsynodal apostolic exhortation, “Querida Amazonia,” released Feb. 12, 2020, the pontiff acknowledged the serious shortage of priests in remote areas of the Amazon, but he insisted not all avenues have been exhausted to address the issue. (CNS photo/David Agren)

“The Amazon has a unique place in the planet’s ecological footprint and its abuse in various forms is having and will continue to have an impact on the connection between humanity and the planet, our common home,” Archbishop Coleridge said in a Feb. 12 statement. “Here in Australia we see, at times dramatically, the damage done by abuse of the natural world — not only to the environment but also to wildlife, to communities and countless individuals.””Pope Francis, as always, is anxious that the people of the world are not ‘robbed of hope.’ In calling for an ecological conversion, he invites us all to move from awareness to active response, and to see, especially in our young people, the signs of hope for the future and the spur to action in the present,” said a Feb. 12 statement from Archbishop Eamon Martin of Armagh, Northern Ireland, who is primate of all Ireland.

“The Holy Father today presents a clear-sighted analysis of the grave threats to the peoples and ecosystems of the Amazon, and by extension to the earth, our common home,” Archbishop Martin added. “He highlights the problems of poverty, economic and social injustice and the violation of human rights which are intertwined in the vicious cycle of ecological and human degradation.”

“Querida Amazonia” is a “remarkable exhortation” in that “the mission comes before the church, which is a means not an end,” wrote Austen Ivereigh, a fellow in contemporary church history at the University of Oxford and the author of two books on Pope Francis. He made the comments in a Feb. 12 essay in the British Catholic journal The Tablet. “The mission is the inculturation of the Gospel.”

In the exhortation, Pope Francis said “women who play a central role in Amazonian communities should be given leadership roles than do not entail ordination,” but would include a commission from the local bishop, Ivereigh noted. “This, he says, would also allow women to have a real and effective impact on the organization, the most important decisions and the direction of communities, ‘while continuing to do so in a way that reflects their womanhood.’”

This is but one example of how Pope Francis wants Catholics to hear the change in the Church called for by the Spirit, according to Ivereigh. “Some will be frustrated, disappointed and perplexed. Others will be delighted,” he said.

Count the Women’s Ordination Conference in the first group. While it “applauds the pope’s sincere concern for the global climate catastrophe and its particular threats within the Amazonian region,” it said in a Feb. 12 statement, “the pope is willfully turning his back on the calls of women for recognition of the sacramental ministries they offer the people of the Amazon and the global church.”

The statement, from executive director Kate McElwee, added: “The pope seemingly ignores the synod’s request for more study on the possibility of women deacons, and instead, in the face of sacramental scarcity, calls for prayer for male vocations to priesthood. This shows, yet again, that a synod without the equal voice and votes of women will never produce fruit that satisfies the urgent needs of the people of God.”

Regarding women’s ordination, Pope Francis said in an interview for a new book on St. John Paul II released Feb. 11 that this question “is no longer open for discussion because the pronouncement of John Paul II was definitive.” The current pope’s predecessor rules out women priests.

Some prelates took to Twitter to offer their observations on “Querida Amazonia.”

Pope Francis’ own Twitter account posted this shortly after the exhortation’s release: “I dream of Christian communities capable of generous commitment, incarnate in the Amazon region, and giving the Church new faces with Amazonian features.”

Bishop Joseph E. Strickland of Tyler, Texas, tweeted in response: “Beautiful. May the Amazon region and every region of the world be transformed in the Image of Jesus Christ. Pray for the Holy Father.”

Bishop Richard F. Stika of Knoxville, Tennessee, tweeted Feb. 12: “So the doom and gloomers I guess will find something else to attack the pope but he said no to married clergy and woman deacons.”