FORT LAUDERDALE, Fla. (CNS) — New medical directives governing health care partnerships and revisions to the Charter for the Protection of Children and Young People were approved during the U.S. Conference of Catholic Bishops’ spring general assembly.

During their June 13-14 meeting, the bishops also approved what is described as a “pastoral response” to Asian and Pacific Island Catholics and, after a long discussion, they decided to supplement their quadrennial document on Catholic participation in public life with a short letter, a video and other supplementary materials.

Sessions’ decision “elicits deep concern because it potentially strips asylum from many women who lack adequate protection,” the bishops said. “These vulnerable women will now face return to extreme dangers of domestic violence in their home country.”

Just after opening prayer, Cardinal Daniel N. DiNardo of Galveston-Houston, USCCB president, read the statement from the dais, and the bishops voiced their support.

In his remarks, Cardinal DiNardo said he joined Bishop Joe S. Vasquez of Austin, Texas, chairman of the bishops’ Committee on Migration, “in condemning the continued use of family separation at the U.S.-Mexican border as an implementation of the administration’s zero-tolerance policy.”

“Our government has the discretion in our laws to ensure that young children are not separated from their parents and exposed to irreparable harm and trauma,” the cardinal said. “Families are the foundational element of our society, and they must be able to stay together.”

“Separating babies from their mothers is not the answer and is immoral,” he added. 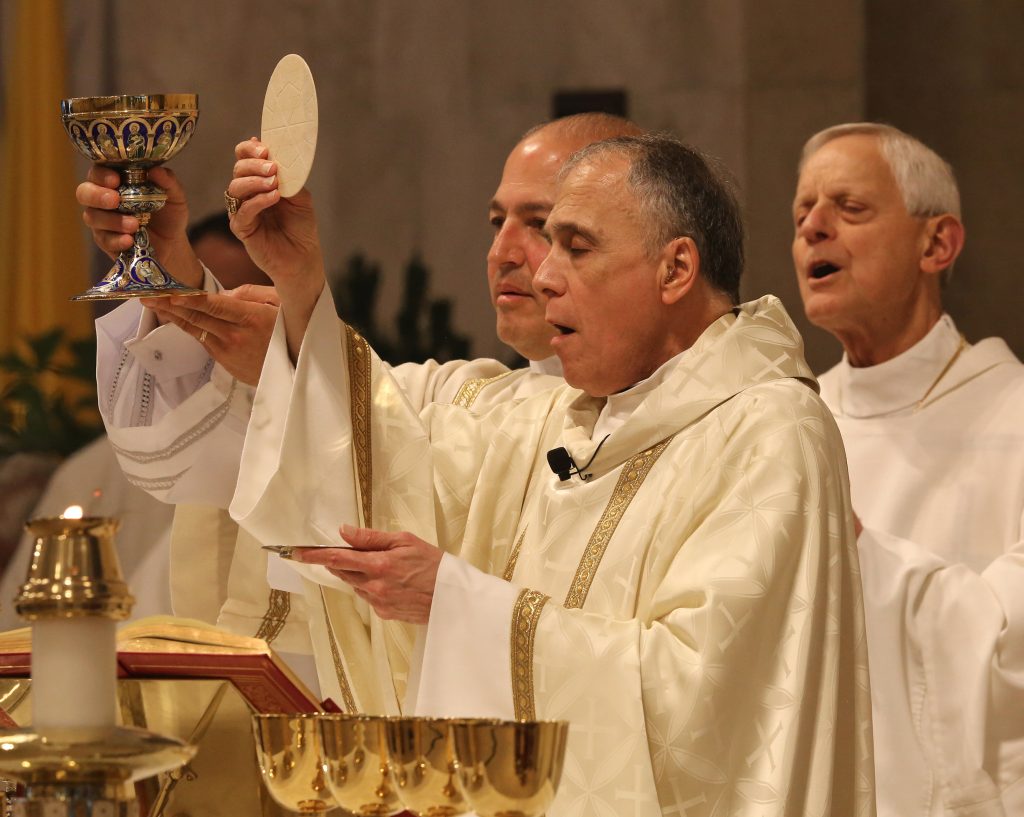 The bishops voted 183-2, with two abstentions, to revise ethical and religious directives governing key moral questions when Catholic and non-Catholic institutions are preparing to cooperate or merge.

Under development since 2015, the changes are limited to Part 6 of the “Ethical and Religious Directives for Catholic Health Care Services” developed by the U.S. Conference of Catholic Bishops.

Bishop Robert J. McManus of Worcester, Massachusetts, chairman of the bishops’ Committee on Doctrine’s Subcommittee on Health Care, told the assembly the new directives will help bishops decide whether a health care partnership can occur under the Church’s moral teaching.

The revisions offer more specific guidance to health care administrators confronted with an increasingly complicated business environment and widespread consolidation within the industry. 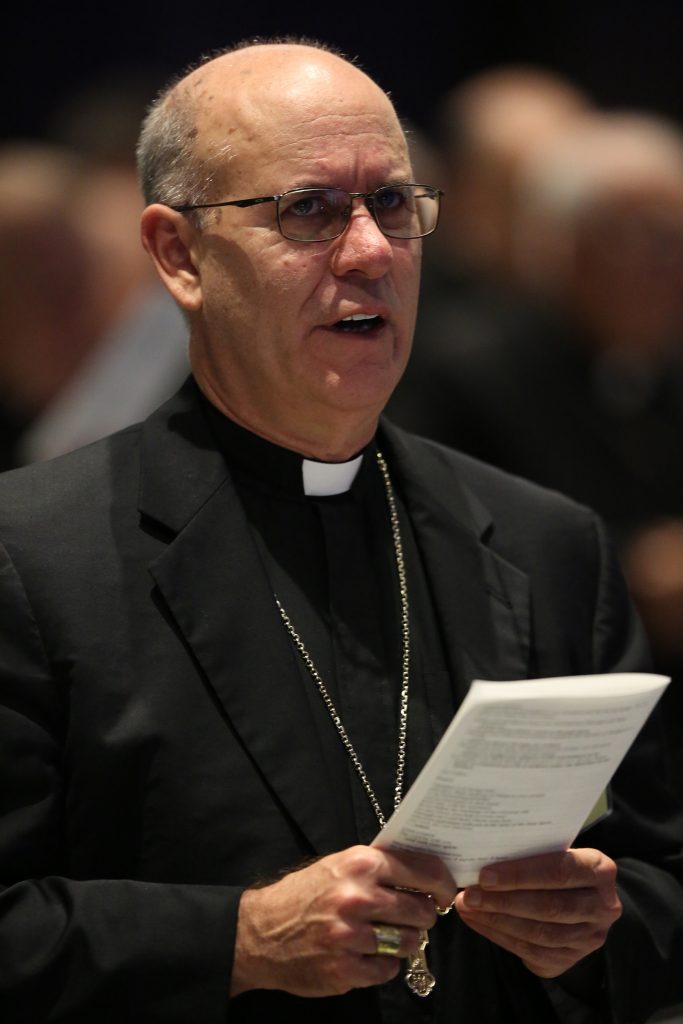 The bishops also approved changes in language to clarify several articles of the Charter for the Protection of Children and Young People. The changes are the first since 2011, as the work to update the document took several years longer than planned to wind through the review process established by the bishops. The vote was 185-5, with one abstention, to enact the changes.

Bishop Timothy L. Doherty of the Diocese of Lafayette-In-Indiana, chairman of the Committee for the Protection of Children and Young People, presented the changes, saying that they will strengthen protections for young people.

A provision changing the review of the charter from every two years to seven years was among the approved changes.

The changes generally tighten requirements for all individuals working with children, and add wording to individual articles of the charter or clarify terms used in the document.

In the lead-up to the vote, Francesco Cesareo, chairman of the National Review Board, cautioned the bishops to guard against complacency in carrying out the charter’s requirements. He urged them to “never waver” in their commitment to protect minors and vulnerable adults from sexual abuse.

Cesareo said signs of complacency surfaced in some dioceses and eparchies as auditors compiled an annual report on compliance with the charter during the period July 1, 2016-June 30, 2017. While progress is being made as the number of allegations during the period declined from the two previous years, he cautioned the bishops to remain vigilant.

“Despite the progress we have made in the Church and the ongoing efforts of dioceses, many among the faithful and in society at large question the commitment of the Church, and, in particular the bishops, in addressing the sexual abuse of children,” he told the assembly.

In another vote, the bishops accepted a new document focused on guiding the American Church in addressing the pastoral needs of Asian and Pacific Island Catholics. Adopted 187-2, with two abstentions, “Encountering Christ in Harmony” is meant to provide support and offer ideas for ministry to the nation’s nearly 3 million Asian and Pacific Island Catholics.

Bishop Oscar A. Solis of Salt Lake City, chairman of the bishops’ Subcommittee for Asian and Pacific Islander Affairs, told the assembly the document addresses the fastest-growing minority community in the United States Church.

“Asian and Pacific Islanders are ready for pastoral engagement in the Church’s mission of evangelization,” he said.

“Our approval of this document is indicative of an essential pastoral outreach to the mission of the Church in the United States. It’s a response to the call of Pope Francis to go to the peripheries to proclaim the Gospel,” he added. The document has been in the works for more than two years.

The bishops engaged in an 85-minute discussion before agreeing to develop new supplementary materials and a video to complement its long-standing document guiding Catholic participation in public life.

The new materials were proposed by a working group that included the chairman of USCCB committees that work on public policy issues. They would supplement the bishops’ “Forming Consciences for Faithful Citizenship” and will “apply the teaching of Pope Francis to our day.”

The document traditionally has been updated and released about a year before the presidential election every four years, with its last update in 2015. The new materials are expected to be completed in time for the bishops to approve them at their November 2019 general assembly.

The bishops heard that a planned pastoral letter addressing racism is on schedule for a November vote during the bishops’ fall meeting in Batltimore.

Bishop Sheldon J. Fabre of Houma-Thibodaux, Louisiana, chairman of the bishops’ Ad Hoc Committee on Racism, said the pastoral letter is on schedule for a vote when the bishops reconvene.

He said drafts of the document have been reviewed by various parties and that their suggestions have been incorporated into it. The document will focus on contemporary concerns affecting Native Americans and African-Americans and the “targeting” of Hispanics with racist language and actions, he said.

The pastoral letter will be rooted in the clear message of Micah 6:8, which calls on the faithful “to act justly and to love mercy and to walk humbly with your God,” he added.

On the religious freedom front, Archbishop Joseph E. Kurtz of Louisville, Kentucky, chairman of the bishops’ Committee for Religious Freedom, said challenges to religious liberty continue to emerge and that the U.S. Catholic Church will remain steadfast in addressing them to serve the common good.

In response, he explained, the committee has developed a plan to change the narrative about what religious freedom truly means.

The effort will include “choosing our language carefully” through the use of “inspiring and relatable language that promotes the ‘gift’ of religious freedom,” he said. He used the example of faith-based agencies that face the threat of government shutdown because of their religious or moral convictions.

A second component will focus on telling stories of people facing questions of conscience, such as a nurse who was forced to assist in carrying out an abortion.

The committee’s next action was to focus on Religious Freedom Week, set for June 22-29.

Archbishop Kurtz said a series of eight videos examining various issues related to the free practice of faith were planned to be released for the week. Its theme is “Serving Others in God’s Love,” and Catholics were being encouraged to pray and act in support of religious freedom in the U.S. and elsewhere during the week.