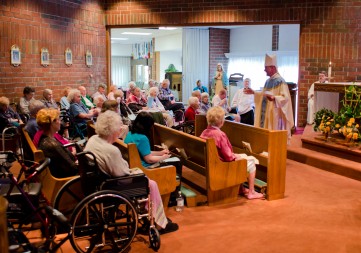 For more photos from the bishop’s visit see the photo gallery.

AVILLA — For the first time since becoming bishop of the Diocese of Fort Wayne-South Bend, Bishop Kevin C. Rhoades visited Provena Sacred Heart Home in Avilla on Aug. 5. He began by celebrating Mass, later touring the facility and learning how the staff there seeks to meet individual needs and provide dignity to seniors.

At least 40 residents, family and staff members filled the chapel for Mass at Provena.

Bishop Rhoades spoke about the dedication of the Basilica of St. Mary Major in Rome, which is celebrated on Aug. 5.

“(St. Mary Major) was the first church in the West dedicated to Mary,” Bishop Rhoades said during his homily. “The gold ceiling was made from the first gold Columbus brought from America.”

Normally, it’s very hot in Rome at this time of year, the bishop continued. But it snowed on a hill on Aug. 5, so a church dedicated to Mary was built on this hill.

“No matter what pain, suffering or troubles (we have), we can always call on her,” Bishop Rhoades said. “She’s always with me.”

St. John — in his vision of the future kingdom of God — says there will be no more mourning or pain, Bishop Rhoades said. And everyone is on pilgrimage toward this kingdom.

“We can’t imagine the joy and peace of heaven (as well as loved ones waiting for us),” Bishop Rhoades said. “Mary is at our side (during the journey).”

Before the final blessing, Bishop Rhoades said it was a gift and blessing that area priests said Mass at the home daily and many residents were able to attend. He also asked those present to pray for him.

After Mass, Bishop Rhoades shook hands and talked with residents leaving the chapel — many of whom were in wheelchairs or needed walkers to move around. Provena residents have access to a full line of services and living options, including short-term rehabilitation (physical, occupational and speech therapy) skilled nursing care, respite care, intermediate care, assisted living, Alzheimer’s and related dementia care, independent living and hospice/comfort care.

“Most nursing homes run on the scheduled needs of employees,” explained Provena Administrator Craig Prokupek. “Here, we meet residents’ needs. For example, they can sleep until 9 a.m.”

Prokupek added that many traditional nursing homes have residents rising at 5 or 6 a.m. to eat breakfast with 80 other residents in a dining hall. Provena residents follow their own schedule.

“One resident told me, ‘You let us do what we want to do,’” Prokupek said.

Connie March, CEO and president of Provena Life Connections, said Provena staff follows more of a pioneer philosophy or person-centered model, which is intertwined with the mission and service philosophy.

“This philosophy coincides beautifully with the dignity of life and respect,” March said.

“It helps them understand their responsibility with regard to ethical and religious directives,” she said.

Father William Grogan is the system director of ethics for Provena Health. It’s his job to ensure each facility in the system is “in compliance with Catholic moral teaching,” he said.

While the bishop was clearly pleased with what he saw and heard, Provena officials were happy the bishop made the trip.

“We were really happy he took time out of his schedule (to visit),” said Prokupek. “The residents and employees appreciated it.”

Provena has 22 institutions, which include six hospitals and 15 nursing homes/retirement residential facilities.

“Provena Sacred Heart Home is one of the top-rated nursing homes in the country,” March said. “There’s a lot of longevity in staff, too.”

The Avilla facility has 36 assisted living apartments, of which one of the neighborhoods of about 12 opened in December, March said. Six people are on the waiting list for assisted living already.

About 220 employees care for the needs of 160 Provena residents, Prokupek said. In addition, there are four Franciscan Sisters of the Sacred Heart who provide pastoral care and two sisters living at Provena.

To help with funding, March said Provena has applied for a $2.5 million grant to upgrade to Indiana Medicaid licensed assisted living. In addition, a merger between Provena Health and Resurrection Health Care of Chicago is on the horizon. March said the matter will be voted on Oct. 11 and integration could begin as early as November.

If the merger is approved, the new system will encompass 12 hospitals, 28 long-term care and senior residential facilities, more than 50 primary and specialty care clinics, six home health agencies and what will be the second-largest behavioral health services program in the state, according to a Provena/Resurrection press release.