The Rite of Election of Catechumens and Call to Continuing Conversion of Candidates took place at the Cathedral of the Immaculate Conception in Fort Wayne on March 3, with Bishop Kevin C. Rhoades as the presider. 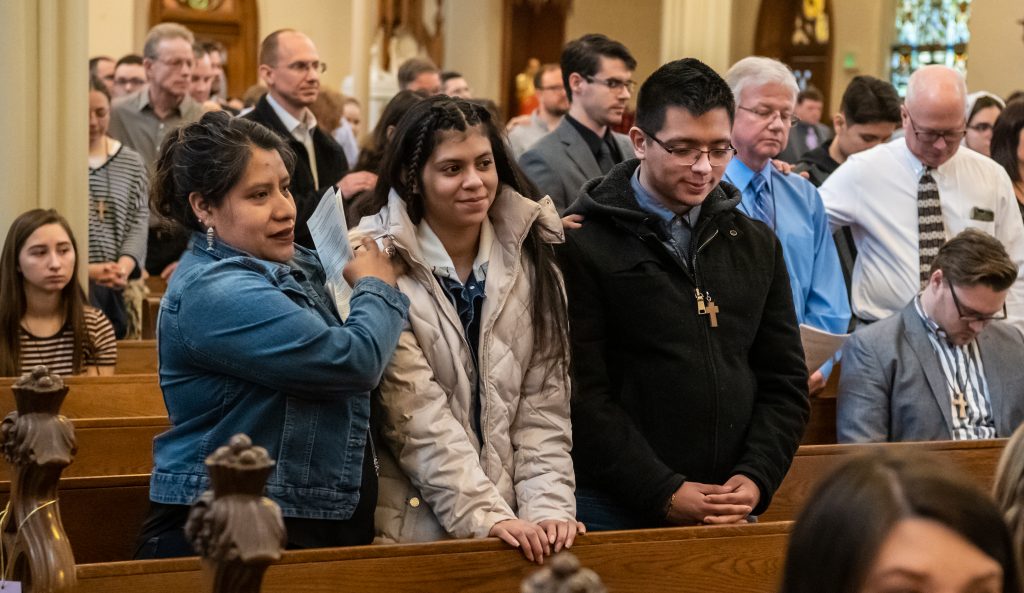 Godparents and sponsors stand with the catechumens and candidates during the Rite of Election of Catechumens and Call to Continuing Conversion of Candidates, which took place at the Cathedral of the Immaculate Conception, Fort Wayne, March 3. — Photos by John Martin

The rite begins the period of purification and enlightenment, a time of intense spiritual preparation for the sacraments of initiation. 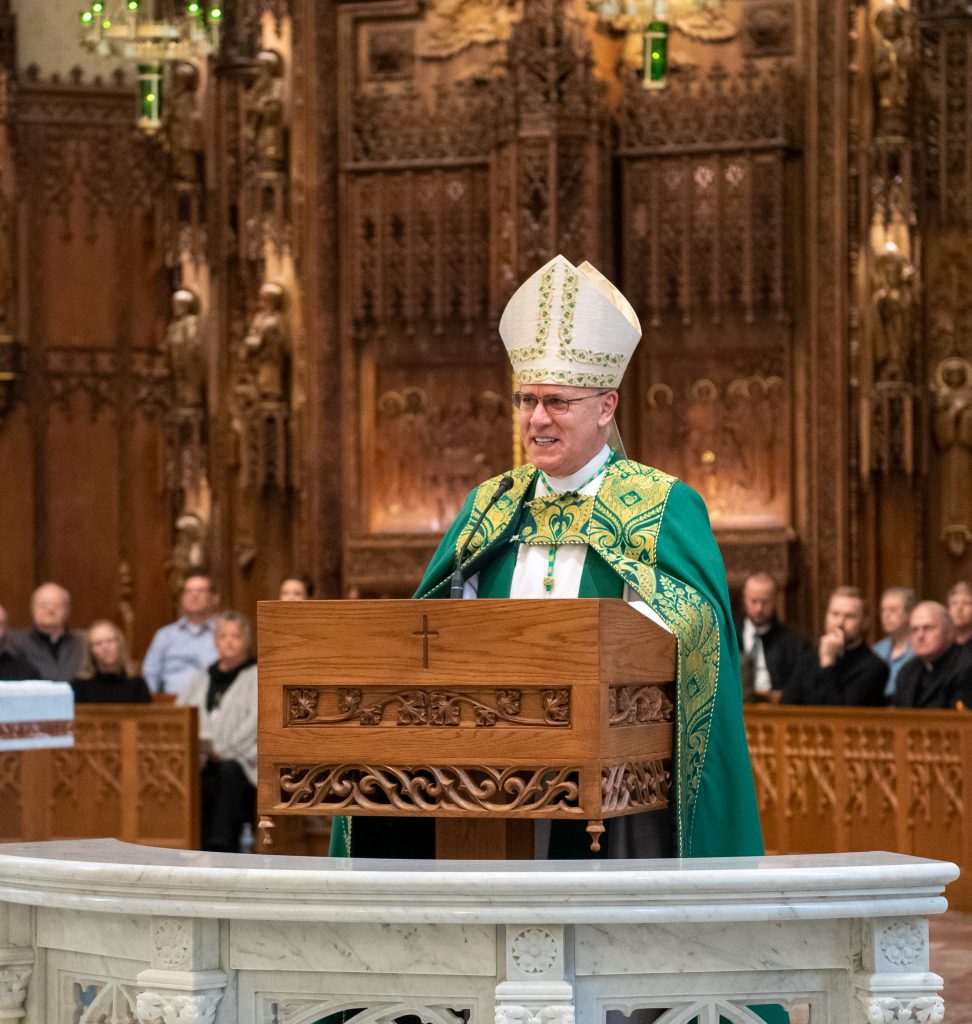 In his homily, Bishop Rhoades encouraged the catechumens and candidates — along with their godparents and sponsors — “to be really spiritually focused during this upcoming season of Lent. Through prayer and reflection, be focused on what is about to happen in your life. You are preparing for something amazing, an encounter with God that is life-changing,” he told them.

The readings of the liturgy give guidance regarding the attitude they should strive to cultivate during the remainder of their period of preparation, he noted.

“First, there is the attitude of fear of the Lord, actually one of the gifts of the Holy Spirit we receive in baptism and confirmation. I encourage you to approach the Easter Vigil with the fear of the Lord,” he said, “(which) means approaching God with deep reverence. It means recognizing how great God is and how small we are before Him.”

“When we have fear of the Lord, we desire to praise and thank Him, and we are led to follow Him with humility, docility, and obedience,” he continued. “Also, an alarm bell goes off within us when we are tempted to offend Him. We realize that one day all things will come to an end and we will have to give an account of our lives to God.”

The reading from the book of Sirach spoke to the fear of the Lord as being the beginning of wisdom. It contains an exhortation for those who fear the Lord, that they should hope for good things, everlasting joy, and mercy. “Think of the saints, especially those you have chosen as your confirmation names,” Bishop Rhoades encouraged. “They were men and women who feared the Lord, who died in the hope for good things, as Sirach says, and who now experience the fulfillment of that hope for joy and mercy. So, as you approach the Easter Vigil with fear of the Lord, I encourage you also to do so with hope.”

Bishop Rhoades then told the catechumens and candidates that they would not be freed of afflictions or become exempt from suffering, but rather that they would have the grace of God to endure suffering and the grace of the sacraments to help to sustain and support them with what St. Paul calls “‘the hope that does not disappoint,’ because the love of God has been poured out into our hearts through the Holy Spirit that has been given to us.”

Following the homily, parish RCIA directors came forward and called the individual catechumens from their own parishes. The catechumens had previously inscribed their names in a “Book of the Elect” kept by each parish. These books were then presented for Bishop Rhoades to sign as the parishes were presented. After participating in the Rite of Election, the catechumens were referred to as “the elect” because they have now been officially declared ready to receive the sacraments at the Easter Vigil on April 20.

At the invitation and enrollment of the names, Bishop Rhoades quizzed the catechumens. “Do you wish to enter fully into the life of the Church through the sacraments of baptism, confirmation and Eucharist?” They replied, “We do.”

The presentation of candidates for full communion took place in the same manner, after which the assembly prayed a song of thanksgiving.

For the convenience of parishes located on the western half of the diocese, a second Rite of Election of Catechumens and Call to Continuing Conversion of Candidates will take place in South Bend on March 10.

Gretchen Espich and her three sons will be baptized and make their full initiation into the Catholic Church at the Easter Vigil. She was raised in a Methodist family, but little value was placed on religion by her parents. They wanted to allow her to choose her faith denomination as an adult, and then be baptized. 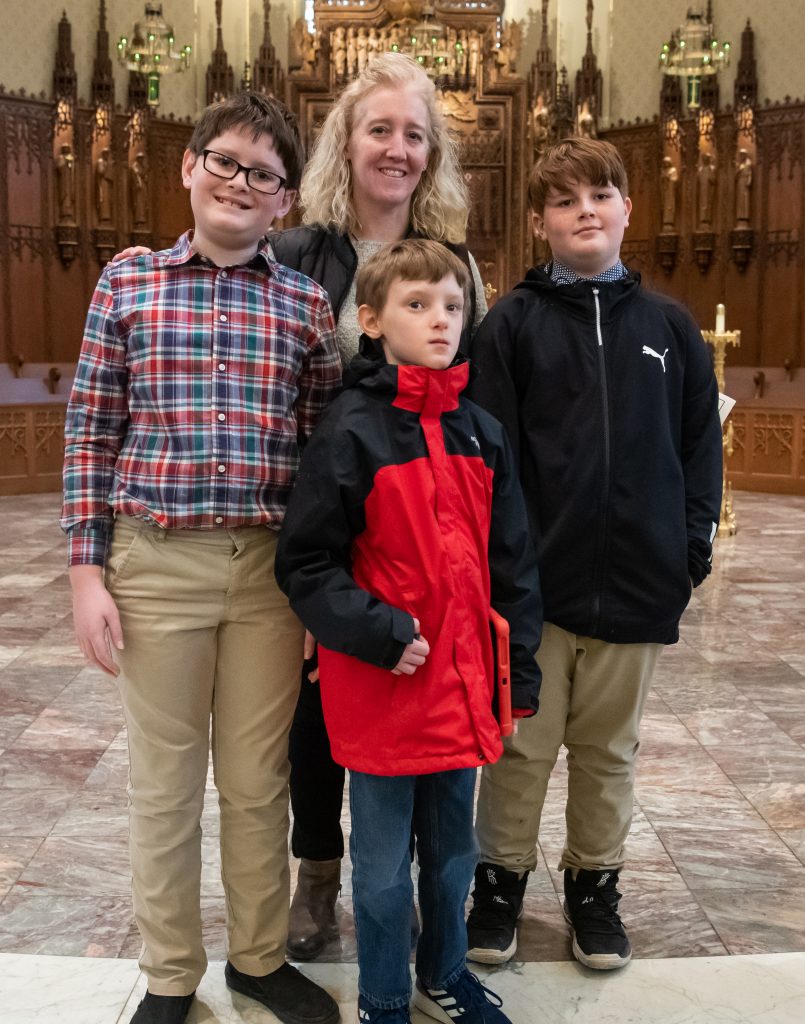 Gretchen Espich and her sons William, Ian and Zach have received formation in the faith and declared their intention join the Catholic Church by being baptized and receiving confirmation and the Eucharist at the Easter Vigil Mass.

From 1997 through 2006, Espich coached at Bishop Dwenger High School in Fort Wayne. This was her first exposure to the Catholic faith. When it was time for her oldest son, William, now a seventh-grader, to begin preschool, his babysitter recommended Queen of Angels School, and the family’s relationship with Queen of Angels developed their faith. In fact, Gretchen said, they have been coming to Mass for a long time: Until recently, though, it never seemed to be the right time to go through RCIA despite the fact that she loved the traditionalism of the Catholic faith and felt in her heart she was “home.” As a wife, mother and career woman, the time never seemed to be there.