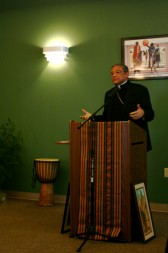 Bishop Joseph Perry, auxiliary bishop of the Archdiocese of Chicago, presents on the canonization cause for Father Augustus Tolton at St. Augustine Parish in South Bend, Feb. 1.

SOUTH BEND — Members of St. Augustine Parish in South Bend gathered Saturday, Feb. 1, for a presentation on the cause for canonization of Father Augustus Tolton, the first Catholic priest of African American descent in the U.S. The presentation was given by Bishop Joseph N. Perry, auxiliary bishop of the Archdiocese of Chicago, who is the diocesan postulator for Father Tolton’s cause.

The Black Catholic Advisory Board of the Diocese of Fort Wayne-South Bend sponsored the event, in conjunction with the St. Augustine Parish Tolton Society.

After an invocation of saints and ancestors led by Deacon Mel Tardy, Bishop Perry told the story of Father Tolton, a figure whom he regards as the “architect for African American Catholicism in the United States.”

Tolton was born into a Catholic slave family in Missouri in 1854, but escaped with his mother and siblings to the free state of Illinois as a young boy. His childhood in Quincy, Ill., was marked by the strife of the nation’s Civil War and the pervasive discrimination against people of his race.

Despite the marginalized position of African American Catholics in his day, Tolton discerned a call to the Priesthood. After numerous rejections from American seminaries, Tolton entered the seminary in Rome and went on to be ordained at the Basilica of St. John Lateran. 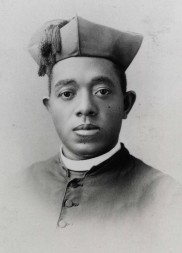 Following his ordination in 1886, Tolton was sent back to Quincy and served an integrated parish community of both blacks and whites, which was a novelty in his time and a scandal to many. Eventually Tolton was moved by his superiors to the Archdiocese of Chicago where he died of heat exhaustion in 1897, at the age of 43.

The cause for Father Tolton’s canonization was formally introduced in 2011 and in February 2012 the Sacred Congregation for the Causes of Saints granted him the title “Servant of God.”

In his presentation, Bishop Perry highlighted the significance of Tolton’s cause for the African American Catholic community.

“This is the story of a man who overcame great odds. He is an icon of perseverance and charity, and he paved the way for future generations of Catholics of African descent,” Bishop Perry said.

“Father Augustus Tolton lived before terms like civil rights, segregation and discrimination were popular words in common parlance,” he added. “He lived a life of isolation, anxiety and persecution because he was the first priest of our ethnic definition to prevail amidst the evil of racial apartheid. He lived at a time when in this country a Roman collar around the neck of a black man was unimaginable. He lived through the aftermath resulting from slavery, the nation’s Civil War, and the tumultuous period of Reconstruction. And yet he remained a Christian through it all.”

While numerous civic heroes and heroines have emerged from the African American community, Bishop Perry noted, the Black Catholic community has not raised up its own saints. The distinction between a civic hero and a saint, he says, is crucial.

“A saint is not a celebrity. A saint is a baptized man or woman of our Catholic tradition who took the Gospel and lived it with heroic seriousness,” Bishop Perry said.

During the question-answer period of Bishop Perry’s presentation, he discussed practical steps that Catholics can take to advance Tolton’s canonization cause, including offering Masses for the intention, asking for miracles through Tolton’s intercession, studying his life and holding informative presentations, and contributing financially to the cause.

But what is most needed, Bishop Perry urged, is a groundswell of interest and excitement surrounding Father Tolton’s cause. “In the end, the pope does not make saints; they come from the people.”

“What Rome needs to see is that the people want Tolton to be declared a saint,” Bishop Perry said.

Twice a year Bishop Perry leads pilgrimages to the important sites in Tolton’s life in Missouri and Illinois that draw pilgrims from all over the country. He says support for Tolton’s cause is growing.

After several years of rigorous research of Tolton’s life, Bishop Perry’s office will soon submit the documentation to Rome for review. The next step is to secure the first of two miracles necessary for canonization.

Lifelong St. Augustine parishioner Charlotte Huddleston has recently started asking Father Tolton’s intercession for her health. “I’ve been praying to him for more than 20 years,” Huddleston said. “But it never occurred to me to ask for a miracle for myself.”

Bishop Perry is insistent on the power of prayer for Tolton’s cause.

“Unless we ask God for this, the Father Tolton story will remain just a nice human interest story,” he said.

Wendy Summers, a member of the Black Catholic Advisory Board, believes that the cause for Tolton’s canonization must be a concern for the entire Church, not just Black Catholics.

After the presentation she commented, “What we just talked about is Catholic history, not just Black history. It is the history of all of our faith.”

The group of parishioners gathered for the bishop’s presentation embodied precisely the mix of white and African American Catholics that Summers would like to see working on Father Tolton’s cause together.

Bishop Perry celebrated a vigil Mass at St. Augustine Parish to conclude the event. Music was provided by the Notre Dame Voices of Faith Gospel Choir.