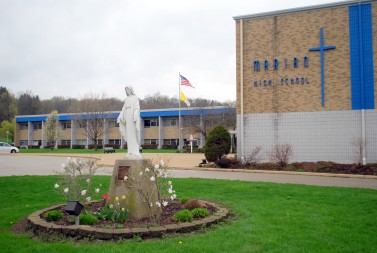 Marian High School was the site of the most recent pastoral visit by Bishop Kevin C. Rhoades.

MISHAWAKA — A February snowstorm that closed area schools derailed Bishop Kevin C. Rhoades’ planned visit to Marian High School two months ago, but spring showers did not dampen his April 26 rescheduled visit.
“This is a great time to come during the Octave of Easter to celebrate an Easter Mass with you,” for Christ’s Resurrection is “the great crowning truth of our faith,” Bishop Rhoades told the students in his homily at the all-school Mass that started the day.

Marian is the youngest of the four diocesan high schools, but will celebrate its 50th anniversary in 2014. The land for the original Marian campus was donated to the diocese by the Sisters of St. Francis of Perpetual Adoration, whose Immaculate Heart of Mary Province is at Mount Alverno, directly south of the Marian campus. The sisters have maintained a close relationship with the school since its opening, with Sister Marie Morgan presently serving on the theology faculty.
The first Marian students arriving at the new school in 1964 probably would not have guessed that the Marian campus would grow to 72 acres with the acquisition of adjacent land for athletic fields and tennis courts. The original building also has been expanded, and an ongoing renovation project is updating classrooms with state-of-the-art technology and furnishings.

In his homily, Bishop Rhoades noted Marian’s academic excellence. Indeed, Gov. Mitch Daniels had been at Marian the previous week to give senior Tim Trippel the Governor’s Award for the Top Young Scientist in the State of Indiana and a college scholarship for $10,000. At the Hoosier Science and Engineering Fair, both Trippel and senior K.G. Koch earned an all-expense-paid trip to the International Science and Engineering Fair in Los Angeles, Calif.

In the past 10 years (2000-2010), Marian had 31 National Merit Finalists scoring in the top 1 percent of the nation and 42 Commended Students scoring in the top 5 percent on the PSAT/NMSQE. Marian was named an “exemplary” school based on consistently high scores on the Indiana State Test of Educational Progress (ISTEP) and the Graduation Qualifying Exam (GQE). When last year’s End of Course Assessment (ECA) scores were released by the state, Marian was in the top 6 percent of the 412 high schools in the state. 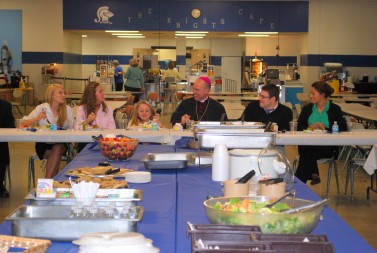 Ninety-seven percent of Marian graduates immediately go on to college, and during his visit, Bishop Rhoades chatted with some of the Marian students about their college plans.

On the topic of spiritual life, Bishops Rhoades praised the work of Marian chaplain, Father Jake Runyon, as well as all the faculty and staff involved in liturgical celebrations and campus ministry. Marian Principal Carl Loesch leads the student body in prayer every day at the beginning of the school day, and again at the end of the day, and each class begins with a prayer or Scripture reading.

Father Runyon, or a priest from a nearby parish, celebrates Mass in the recently remodeled school chapel three days a week and hears confessions every Wednesday. The chapel is open all day every day for individual prayer, and Eucharistic Adoration takes place in the chapel every First Friday of the month. Father Runyon also celebrates an all-school liturgy every month, where the Marian Liturgical Choir under the direction of Mrs. Jeanette Dripps provides the music. Bishop Rhoades took note of the choir’s excellence at the end of the Mass he celebrated.

After Mass, Bishop Rhoades visited with two theology classes of seniors. When he learned that the “Great Catholic Thinkers” class would soon study the works of Pope John Paul II, the bishop reminded the students that the pope would be beatified on May 1. He told about having the opportunity to be an altar server for Pope John Paul six times when he was a seminary student in Rome.

Bishop Rhoades related that just being that near to the pope was an “incredible” experience, and “I knew he was a saint.” Before celebrating Mass, the pope would kneel in prayer in the sacristy, Bishop Rhoades said, “and it was like he was connected to another realm-like in ecstasy.” Even at Mass, the bishop continued, “I felt he had a real connection to God.”

On a more earthly level, the activities of Marian students were also highlighted on the day that Bishop Rhoades visited the school. After the Mass, Robyn Burroughs of Riley Children’s Hospital, presented an award recognizing the efforts of Marian students to raise over $22,000 to benefit the hospital through dance marathons over the past three years. Seniors Tess Gunty and Laura Herron also were recognized for their national awards in the Scholastic Art and Writing competition: Gunty for creative writing and Herron for photography. Both girls will receive their awards at Carnegie Hall in New York in June.

With 30 clubs active at the school, students have a wide choice to meet their interests, from the Right to Life Club to Speech and Debate, to the Ski Club. Marian also fields 23 varsity sports, with 72 percent of the student body participating in at least one varsity sport.

Bishop Rhoades enjoyed lunch in the Marian cafeteria with student council members before ending his day at Marian in meetings with the theology faculty and Principal Loesch.