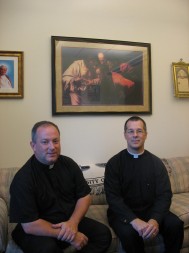 After sharing their thoughts about a recent Courage/EnCourage Conference to help Catholic men and women — and their families — live in accordance with the Church’s pastoral teaching on same-sex attraction, Father Andrew Budzinski, left, and Father Daniel Whelan, right, sit for a picture beneath an art print in Father Budzinski’s office titled, “The Incredulity of St. Thomas,” by Michelangelo Caravaggio. Ironically, the artist may have painted the tear in St. Thomas’ sleeve, as he examines the wound in Christ’s side, to signify “we each carry our own ‘woundedness,’” said Father Budzinski.

Founded in 1980 by the late Cardinal Terence Cooke, archbishop of New York, there are approximately 50 chapters of Courage/EnCourage throughout the United States, Canada, Australia and Europe.

Bishop Kevin C. Rhoades, of the Diocese of Fort Wayne-South Bend, is establishing a chapter of Courage/EnCourage in the Fort Wayne area of the diocese, beginning in September, under the Office of Family Life. He asked Father Andrew Budzinski, parochial vicar, St. Vincent de Paul Parish, Fort Wayne, and Father Daniel Whelan, in residence at St. John the Baptist Parish, Fort Wayne, to attend the Annual Courage/EnCourage Conference in July at Mount St. Mary’s University, Emmitsburg, Md. They will serve as chaplains for the new chapter with Father Budzinski the contact for Courage — he can be reached at the parish at (260) 489-3537, ext. 203 or [email protected] — and Father Whelan the contact for EnCourage — who can be reached at (202) 499-0479 or [email protected]

According to Fred Everett, co-director of the Office of Family Life, there is a South Bend chapter headed by Dr. Phil Sutton. However, it functions independently and the Office of Family Life does not oversee it. Bishop Rhoades has appointed Father Dan Scheidt, pastor of Queen of Peace Parish, Mishawaka, as a chaplain for the group and interested people should contact Father Scheidt for more information at (574) 255-9674.

“Some persons find themselves, through no fault of their own, to have a same-sex attraction. Homosexuals, like everyone else, should not suffer from prejudice against basic human rights. They have a right to respect, friendship and justice. They should have an active role in the Christian community. Homosexual activity, however, as distinguished from homosexual orientation, is morally wrong. Like heterosexual persons, homosexuals are called to give witness to chastity, avoiding, with God’s grace, behavior, which is wrong for them as non-marital sexual relations are wrong for heterosexuals. Nonetheless, because heterosexuals can usually look forward to marriage, and homosexuals, while their orientation continues, might not, the Christian community should provide them a special degree of pastoral understanding and care” (excerpt from To Live in Christ Jesus — United States Conference of Catholic Bishops, 1976).

“The Catechism of the Catholic Church says “fortitude” (or “courage”) is one of the moral virtues that ‘… ensures firmness in difficulties and constancy in the pursuit of the good. It strengthens the resolve to resist temptations and to overcome obstacles in the moral life (CCC 1808),’” Father Whelan said. “We would all agree that this virtue is needed in all aspects of our lives,” he continued. “With this in mind, it is, indeed, appropriate that the name of this virtue, Courage, has been given to this beautiful apostolate.”

The purpose of Courage is to help people struggling with same-sex attraction — known as SSA, the typical terminology used, not “gay” or “homosexual” — to be chaste through prayer, the sacraments, sound spiritual direction and a 12-step program patterned on Alcoholics Anonymous, Father Whelan explained.

“Men and women meet in groups and form friendships and support, which aid them in being able to embrace the gift of chastity, for ultimate freedom is found in Jesus Christ and His Church,” said Father Whelan, who was somewhat involved in Courage in the Archdiocese of Louisville, Ky.

EnCourage is a ministry within Courage dedicated to the spiritual needs of parents, siblings, children, spouses and other relatives and friends of persons who have same-sex attractions.

“Anyone who wants to learn more and is interested in possibly entering a group should get in touch with Father Daniel or me,” Father Budzinski said. “We will meet with them, explain what Courage is all about, find out if this is where they’re at and what they’re looking for. If it’s a fit for them then we would direct them to the meetings themselves,” he added.

“Confidentiality is absolutely sacred within the group. Everyone that comes to a meeting will understand that confidentiality must be treated like the seal of confession. Everyone who is called to be a part of the group needs to have complete assurance that they are being given a safe place to come,” Father Budzinski stressed. The time and place of the bi-monthly Courage and monthly EnCourage meetings are not published.

Both priests are available to meet with people individually. “Some might not be ready for the group level as yet … and sometimes they may never get to that point,” Father Budzinski said. The priests suggested interested individuals visit the Courage/EnCourage websites for more information, including the five goals of each and the 12 steps of Courage. The addresses are www.couragerc.net and www.couragerc.net/EnCourage.html.

“Unfortunately, all too often, our society pushes men and women, who are struggling with same-sex attraction, into the lifestyle, claiming that this will make them happy and free,” Father Whelan said. “Furthermore, they claim that any guilt or other negative feelings associated with their homosexual condition stem from a homophobic culture and/or an antiquated religion. This is far from the truth. While we are called to love and support those with same-sex attraction, we recognize the natural law written on our hearts, and that to act in a way which goes against this is always objectively wrong, and hurts a person emotionally and spiritually,” he said.

“When a person caves into SSA it becomes a cross that crushes them,” he emphasized. “But with Christ and the Church and freedom it’s still a cross but it’s a cross they are able to carry!” — “with a Simon who will help them carry their cross,” added Father Budzinski.

“I want to emphasize, for anyone who struggles with SSA, to know that they truly are a beloved son or daughter of a God who loves them,” Father Budzinski said. “We have proof of God’s love by our mere existence. We couldn’t exist without God’s love that holds us in existence. He offers His love and mercy and healing to everyone,” he explained.

Father Whelan added, “The conference reiterated for me and Father Andrew that you see these people struggling but there’s a place in the Church for them. And look at the beautiful things these people are doing … people who are professionals, they come from all walks of life, and there are some who are married. The main goal of both Courage and EnCourage is not to say that you are going to be changed,” he continued.

“It’s not opposed to that aspect for someone who wants to explore this issue deeper with the possibility that maybe eventually they could embrace married life. Courage would direct them to the proper reparative therapy, but neither Courage or EnCourage says that’s our goal. However the resources and direction are there for someone who wants to explore that possibility,” he added.