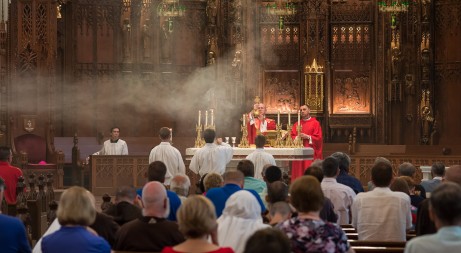 FORT WAYNE — “Thank you for coming to Mass this morning as we begin the Church’s nationwide Fortnight for Freedom, two weeks of prayer, education and action in support of religious liberty,” said Bishop Kevin C. Rhoades as he opened the second annual Fortnight in the Diocese of Fort Wayne-South Bend. The Mass was celebrated at 8 a.m. Saturday, June 22, in the Cathedral of the Immaculate Conception in downtown Fort Wayne. Cathedral Associate Pastor Father Jan Klimczyk was the concelebrant.

Fortnight for Freedom is taking place in the diocese until July 4 and consists of national and local efforts to educate Americans on challenges to religious liberty both at home and abroad.

As with last year’s fortnight, the event began with a special Mass and will conclude with a Mass celebrated by Bishop Rhoades at 9 a.m. Thursday, July 4, at St. Matthew Cathedral in South Bend. The faithful are encouraged to participate in the Masses and other special observances at parishes throughout the diocese.

“We begin this fortnight on the feast of two martyrs who died for refusing to deny their faith and violate their consciences,” Bishop Rhoades said. “St. John Fisher was the bishop of Rochester, England, and St. Thomas More was an attorney, husband, father and Lord Chancellor of England. 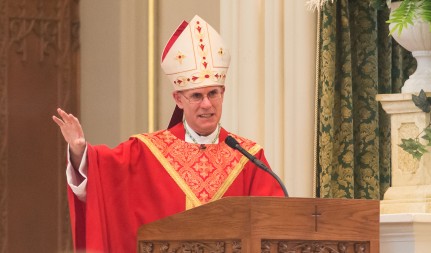 “You probably know the story of these two great saints,” he continued. “When the pope refused to annul the marriage of King Henry VIII, the king broke from the Catholic Church and declared himself the head of the Church in England. Citizens of England were required to sign an oath acknowledging Henry as the head of the Church. For fear of suffering and death, most agreed to sign the oath. But Fisher and More refused as a matter of conscience.

Though friends with Henry, Bishop Fisher and More were imprisoned in the tower of London and eventually beheaded for their steadfast refusal to sign the oath of supremacy. Bishop Rhoades remarked, “Some years ago, I was able to visit the cell in the Tower of London where More was imprisoned.”

Bishop Rhoades said as he prayed in that cell he was overcome with admiration for More’s courage.

“The mandate of the Department of Health and Human Services (HHS) coerces religious believers to act against our most deeply held beliefs in violation of our Constitution, our laws and our long tradition of religious liberty,” he stressed. “That is why our diocese and several other Catholic institutions of our diocese are suing the federal government. The HHS mandate is unjust and unlawful. This isn’t about the Catholic Church trying to force its beliefs on others. It is about the government trying to force its beliefs on the Catholic Church. It is a direct violation of our religious liberty to force the Church and its institutions, as well as individuals, business owners, insurers, etc. to violate our own teachings by facilitating and funding sterilization, abortion-inducing drugs and contraception. The proposed ‘accommodation’ rather than an ‘exemption’ for our institutions like Catholic Charities, our hospitals and universities is still very unjust. Though it offers to have insurers or other third parties impose the objectionable coverage, it still deprives us of the ability to provide health coverage to our employees that is consistent with our values and it disregards the conscience rights of both insurers and employees. However the funding is worked out, the simple offer of health coverage by a religious employer would become the trigger for ensuring that all our employees receive morally objectionable services in their health plans.”

“There are other threats to religious liberty,” Bishop Rhoades explained. “We have experienced in our country discrimination against Catholic adoption and foster-care services because, when placing children with couples, we make sure they enjoy the advantage of having a mother and a father who are married. We have seen discrimination against our United States Bishops’ Migration and Refugee Services because we will not provide or refer for contraception and abortion. Some states have tried to make it criminal for us to provide Christian charity and pastoral care to undocumented immigrants. I could give other examples. One of the most troubling threats to religious liberty is that which is arising from the redefinition of marriage. The threat to religious freedom is larger than any single case or issue. It has its roots in the growing secularism of our culture, a secularism that seeks to marginalize the Church from culture and society.”

Bishop Rhoades offered the following suggestions for the faithful:

• Pray for the protection of religious liberty and increased respect for the role of faith in public life;

• Educate yourselves and your family, friends and neighbors on this issue. Many educational resources are available on the USCCB website and the special website www.Fornight4Freedom.org.

“We must all be united in our support of religious liberty. May Sts. John Fisher and Thomas More intercede for us, that this Fortnight for Freedom in our diocese and throughout our country will further this noble cause,” Bishop Rhoades concluded.