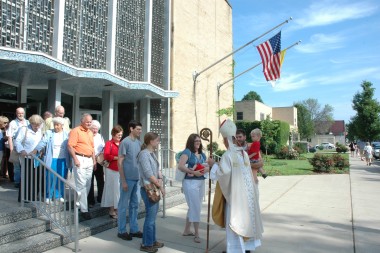 Bishop Kevin C. Rhoades greets those who attended the Fourth of July Mass at St. Matthew Cathedral in South Bend. The Mass closed the diocesan celebration of the Fortnight for Freedom, a national and local effort to educate Americans on the challenges facing religious liberties, not only in the United States, but worldwide as well.

SOUTH BEND — Bishop Kevin C. Rhoades concluded diocesan activities of the nationwide celebration of Fortnight for Freedom with a special Mass on July 4 at St. Matthew Cathedral in South Bend. The two-week long Fortnight for Freedom is a national and local effort to educate Americans on the challenges facing religious liberties, not only in the United States, but worldwide as well.

Hundreds of faithful joined Bishop Rhoades and concelebrant Msgr. Michael Heintz for the July 4 Mass. Bishop Rhoades spoke about the nation’s history and what the Fourth of July means to the nation.

“In 1776, Catholics were a small oppressed minority in the 13 colonies, victims of anti-Catholic bias and discrimination brought over with the penal laws of England. But they joined the revolutionary struggle. They hoped that American independence would bring them religious liberty. They rejoiced when religious liberty was incorporated into the Bill of Rights in the First Amendment to the Constitution,” he said.

“We have been blessed with religious freedom, something we can never take for granted,” Bishop Rhoades noted. “It has continually needed to be guarded and defended.”

Bishop Rhoades also talked about the right to live the faith without government coercion.

“We insist upon not only the freedom to serve God and others through our schools, colleges, universities, hospitals and charities without compromising our faith and moral teachings.”

He added, “Authentic religious freedom includes the freedom for individuals to live their faith in the workplace and to advocate in the public square those truths and values that flow from their faith.”

The Church has been at the forefront of the fight for the right to life, the truth and meaning of marriage and religious liberty.

Bishop Rhoades reminded the faithful that, “we are also standing up for the truth stated in the Declaration of Independence — that our rights come from God who created us.”

He encouraged the faithful to celebrate this nation’s independence “with authentic patriotism, that is, love for our country. Our love for God, the Church and our country motivates us in our campaign to protect religious liberty.”

He concluded the homily, and said, “Today ends the Fortnight for Freedom. It does not end our prayers and efforts on behalf of religious liberty. May God, who gave us life and liberty, bless us, our nation and all peoples with renewed determination to protect these cherished gifts.”

After Mass, Bishop Rhoades thanked everyone for their attendance and wished everyone a wonderful and enjoyable Fourth of July. “What a great way to start off our nation’s holiday,” he said.

The crowd responded with loud applause to the moving words of the bishop’s homily. “I was tremendously excited to see how well the Mass was attended. The bishop’s reflection on our founding fathers and the role of the Church in protecting our religious freedom was moving,” said St. Matthew cantor Alicia Nagy.

Stephanie Vance attended the Mass with her husband Kevin and their children. She stated, “It was so refreshing to hear the bishop. Nowhere else would you hear that message.”

While the Fortnight for Freedom has ended, the focus on protecting religious freedom will continue in the diocese and across the nation.