AUBURN — Bishop Kevin C. Rhoades made the short drive north to Immaculate Conception Church in Auburn last Saturday to celebrate the evening Mass with parishioners there and bless a recently completed addition to the church.

As is his custom, Bishop Rhoades greeted the assembly warmly. “What a joy it is to be with you this evening,” he said. And he noted how appropriate it was to be present for the special event on the Feast of the Immaculate Conception in a church of the same name.

Parishioner Sarah Speer, chair of the communications committee, called the new addition a project that had been under discussion for “years and years” and that finally came to fruition just this year.

There had long been concern that the church community lacked a sense of togetherness because after attending Mass, parishioners immediately left for home because there was no sheltered area outside the main body of the church where people could congregate. There was a need for a protected gathering area where parishioners could assemble and a covered entryway to provide better access for the elderly and handicapped.

Then three years ago Father Derrick Sneyd arrived on the scene and took charge. “It was great to have someone say, ‘Let’s just do it,’” said Speer, describing Father Derrick’s approach to the long-standing issue.

The pastor himself said it came down to a “new thinking track” and a discussion of what the parish really required. As well as a gathering area, the parish needed more space for religious education for children and adults. Father Sneyd also anticipates that the area will become a liturgical and church history center for DeKalb, Noble and Steuben counties and looks forward to serving the larger Catholic community as well. “Anything we do is helping the universal Church,” he pointed out. 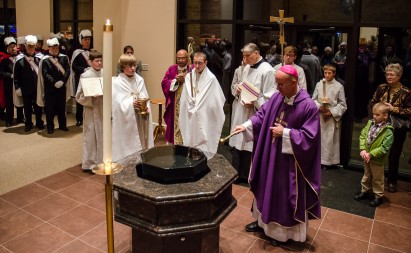 The building and finance committees immediately went to work on the fundraising effort with a “one-time ask” approach to the project. Father said firmly, “I did not ask twice.” Parishioners were contacted and requested to do whatever they could to help meet the goal. Committee members David Hefty and Tom Bendinger worked especially hard on the campaign, said Speer, and “we had a generous response from everyone in the parish.” Father Derrick noted with pride that $420,000 came in on the initial request, with the remainder pledged and due in the next 18 months to meet the $600,000 construction cost.

The work began as soon as funds were secured and was fully completed just a week ago, though the pastor kept the new addition under wraps until its official unveiling. Parishioner and church usher Orville Rolston said, “Father didn’t want it used until it was blessed,” so as parishioners arrived for the Mass and dedication, they were seen to peer around the corner of the church for a glimpse of the new construction.

As Immaculate Conception parishioners assembled in the new gathering area after Mass, Bishop Rhoades said to them, “I inaugurate and bless this new parish addition … where many will come to know one another.” He prayed, “Send blessings on your people who will gather here.” The evening concluded appropriately with a social hour in celebration of the event.