A series of informal conversations about Catholicism among young adults took a somber, though energetic and ultimately hopeful turn Feb. 5 when Bishop Kevin C. Rhoades attended Theology on Tap to discuss what he called “a scourge in the Church”— the clergy sexual abuse crisis.

Bishop Rhoades offered his insights into official documents and policies and news and trends that have spanned decades and gave the approximately 120 attendees a history of the crisis. His spontaneous remarks and the lively questions and answers were interspersed with candid reflections, a look at the current situation locally and globally and glimpses of the future, including suggestions for the audience’s next steps.

He began with a question: “How did it happen—this sinful, criminal behavior, this evil that caused so much harm, pain and suffering to victims?”

Studies show incidents of sexual abuse of children and young people in the Catholic Church started growing in the 1960s, reached their peak in the early 1970s and declined steadily in the 1980s and beyond.

Bishops of the United States “started to have an idea that there was a problem back around 1985,” he said. Prior to that, they did not know its prevalence, largely because many victims of such incidents do not come forward quickly. Credible allegations compiled later outlined the problem: Some 4 percent of priests, a majority of whom were ordained between 1950 and 1979, committed acts of abuse during the second half of the 20th century. More than 80 percent of the cases now known had occurred by 1985.

“Most diocesan leaders did respond” once the accusations multiplied in the 1980s and 1990s, Bishop Rhoades said. “But how they responded left a lot to be desired.” Leaders generally sent accused priests away temporarily for treatment and rehabilitation; they often focused on the abusive priests rather than the victims.

“That breaks my heart when I hear that,” he told the young adults at the evening gathering in Mishawaka. He acknowledged he more fully understood abuse victims’ suffering only after he received his first episcopal appointment in 2004 to Harrisburg, Pennsylvania. As bishop in the Diocese of Fort Wayne-South Bend, he said he has reached out to victims as “part of the body of Christ.” He has learned that much healing is possible, he said, and also that the wounds are serious and need to be understood. The abuse by priests has led to damaged relationships with God, troubled marriages, alcoholism and even suicide. 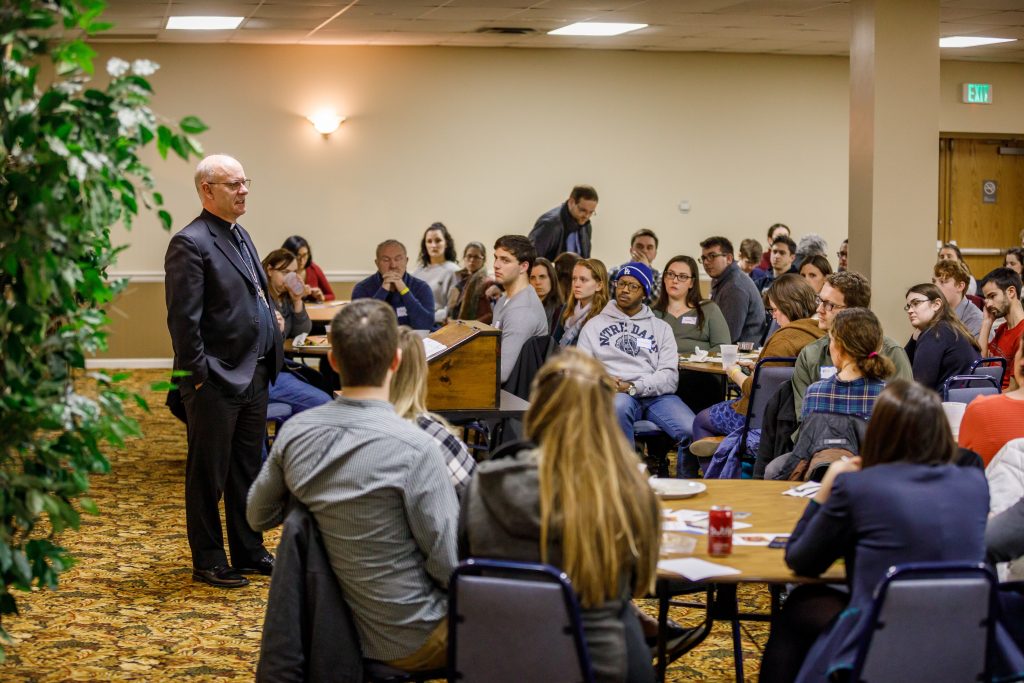 About 120 young people attended the bishop’s presentation at the Mishawaka Columbus Club to better understand the Church, how decisions are being made and what might be possible for the future in light of recent Church scandals. — Photos by Peter Ringenberg

The awareness of accusations that started growing in the mid-1980s prompted the United States bishops to prepare a “Five Principles” document, issued in 1992. The principles included responding promptly to all abuse allegations, relieving credibly accused priests of their ministerial functions and reaching out to victims and families to care for their emotional well-being. But the principles’ implementation “was uneven across the country,” partly because they did not carry the force of Church law, Bishop Rhoades said.

Clergy abuse issues entered the public spotlight in 2002 when The Boston Globe revealed the accusations against priests in the Boston archdiocese. That year, the country’s bishops established the “Dallas Charter,” or the Charter for the Protection of Children and Young People, for the protection of children from clerical abuse. Among other actions, these norms based in canon law established a zero-tolerance policy: One credible accusation required cessation of priestly functions, and a finding of guilt required removal from the priesthood or assignment to a private life of “prayer and penance.”

The bishops also commissioned the John Jay College of Criminal Justice to analyze the nationwide files on clerical abuse from 1950 to 2002. This tally, whose release in 2004 yielded the statistic that 4 percent of priests were involved, also found that a large majority of those abused were teenagers and 81 percent of the abuse cases had male victims.

New cases of abuse have been rare since the Dallas charter’s norms took effect, but the subject came back into the news in 2018 with several events. They included the release of a Pennsylvania grand jury report detailing 70 years of abuse cases from six dioceses in the state, as well as reports on long-standing abuse charges — focused on sexual misconduct with seminarians — against Cardinal Theodore McCarrick, retired archbishop of Washington, D.C. Also, Archbishop Carlo Maria Viganò, former papal representative to the United States, issued three open letters containing a range of allegations.

“There was no new wave of sex abuse scandals” found in the Pennsylvania report, despite media headlines to the contrary, Bishop Rhoades said. The report compiled old and more recent cases that were already known, involving priests who were by then removed from their duties or retired or deceased. But it did paint a detailed picture of abuse. “It just makes you want to throw up. That was part of the shock.”

The bishop cautioned against any tendency to focus on the Catholic Church as a sole target of abuse concerns.

“This is a societal problem,” he said. “We want to protect all kids, not just from Catholic priests who are predators but from all predators.” Balanced news coverage of the problem — existing in public schools and various other organizations — would bolster that broader aim.

He added that, during his nine years leading the Diocese of Fort Wayne-South Bend, credible abuse cases have prompted the removal of three active priests from their duties. The process requires working closely with the Diocesan Review Board that includes lay experts in such fields as law, psychology and law enforcement. If a case is determined to be credible a report is sent to Vatican officials, who decide on the response.

Regarding the McCarrick issues, which sprang from cases prior to his appointment to the Archdiocese of Washington, “we’re all scratching our heads about how he rose through the ranks” from leadership roles elsewhere, Bishop Rhoades said. “We still haven’t gotten to the bottom of this,” he added, in regard to the Church’s internal inquiries. Archbishop Vigano’s range of allegations also remains under study by dioceses and the Vatican, he said.

One key factor in the return of Church abuse in news headlines has been the fact that the 2002 Dallas Charter did not address behavior by bishops, he said. “There was no mechanism for holding bishops accountable.” Efforts to correct that are among the topics pending for the Vatican’s Feb. 21-24 meeting of presidents of bishops’ conferences from around the world to discuss issues of sexual abuse of minors and vulnerable adults.

Besides the history of official actions within the Church, Bishop Rhoades highlighted the importance of understanding the roots of the Church’s problems of sexual abuse. He said a follow-up study by the John Jay College of Criminal Justice, released in 2011, concluded there were multiple causes.

Social factors in the 1960s and 1970s played a big part, he said, noting “there were increased levels of deviant behaviors” that included sexual abuse; the Church’s problems were correlated with increases in premarital sex, crime, divorce, and other trends in the culture.

Before and during the “societal upheaval” of that time, those discerning a vocation to the priesthood generally received a seminary education which “didn’t really include [the] aspect we call human formation,” Bishop Rhoades said. “There wasn’t really attention to the growth of the person, the human side of things, especially human sexuality.”

The 2011 John Jay College probe into the psychology of abusers found that they generally lacked close relationships with peers. They grew up in families that spoke negatively, or not at all, about sexuality, he said. “I would say there was a stunting of their psycho-sexual development.”

Bishop Rhoades recalled his own seminary formation and some excellent mentors and friends who shared a belief and commitment to the Church’s moral teachings and the chaste celibacy required of priests.  At the same time, the bishop also shared that not all seminary formators and seminarians shared that belief and commitment.  He heard of stories of homosexual subcultures at some seminaries back in the 1970s and was disturbed by the dissent on Catholic sexual moral teaching among some priests when he was in graduate school in the 1980s.

As a bishop whose background includes seminary leadership — he was rector of Mount St. Mary’s Seminary in Emmitsburg, Maryland, between 1997 and 2004 — he discussed concerns about today’s seminarians. Much reform has taken place in the schools overall since the 1970s, he said. Fort Wayne-South Bend diocesan seminarians don’t encounter a problematic subculture because “there’s just no tolerance for it.”

Healthy relationships with peers are seen as very important, and aspiring seminarians are encouraged to become involved in social groups and parish activities before entering, Bishop Rhoades said. He added that safeguards against improprieties include oversight of conditions by the bishop himself and the diocesan vocations director, plus strong connections with the rector and others influencing the formation process.

Regarding the overall battle against sexual victimization, he noted the Church has implemented many policies. These include Safe Environment programs to train all those who work with children in places like parish schools, as well as victim assistance coordinators who can be reached at the diocesan level in the Diocese of Fort Wayne-South Bend and around the country.

Bishop Rhoades proposed the following approach for those attending the “Theology on Tap” event, which was sponsored by the diocese, the Mishawaka Columbus Club and the Knights of Columbus. He suggested several steps:

Check multiple sources of news about Church abuse issues, seeking out and spreading a whole story that is accurate and fair.

“If you know a survivor of clergy sexual abuse, please encourage them to come forward for help and support,” he said. “I do see the healing that takes place.”

Pray for the victims and for “the Lord’s strength and peace in the midst of this crisis.” Fasting, penance and reparation are appropriate for all Catholics, he said.

Assist with practices that discourage sexual abuse, such as the Safe Environment programs in parishes and schools.

“We need committed disciples, we need good holy priests, we need holiness,” he said. The new norms are vital but must be complemented by “true renewal,” and that “begins with you as laity and me.” He added, “There needs to be intolerance for unchaste activity. When there is problematic, suspicious behavior, we need to correct it.”

“Our faith has to be in Christ,” Bishop Rhoades said in conclusion. “Don’t let it be shaken by the sins of some.” He praised ideas for increased roles by the laity, and he told the young-adult attendees they’re needed amid the challenges. “It’s a Church of saints and sinners; remember that. What we can do is be on the saints’ side as much as we can.”