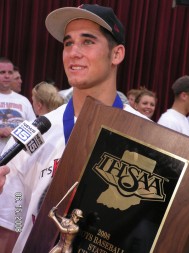 FORT WAYNE — Just two short years ago, Kevin Kiermaier pitched his way to the Class 2-A IHSAA state baseball championship for Fort Wayne’s Bishop Luers High School with a 14-8 win over Elwood on June 14, 2008. Now the 20-year-old standout has been drafted by the Tampa Bay Blue Rays in the 31st round of the Major League Baseball (MLB) draft. “Going pro has been my dream for a long time,” said an excited Kiermaier.

Kiermaier started T-ball in the Harding Little League program before switching to New Haven for his major league years. Later, as a 13-14 year old playing for the Indiana Cardinals travel team, Kiermaier showed remarkable talent. It was during this time period that Jim Kiermaier, Kevin’s dad, strongly encouraged him that baseball was his sport. But Kiermaier’s love, at the time, was basketball. However, measuring just 5 feet 6 inches his freshman year of high school, Kiermaier realized baseball might be the better bet over hoops or football. And now he is starting the ride of his life to the “big leagues.”

After Bishop Luers, Kiermaier continued his baseball career at a junior college with plans to move up to a D1 school. He attended Parkland College in Champaign, Ill., with as many as five others from the Fort Wayne area, including best friend and Bishop Luers teammate Tyler Watts. And he did accomplish his goal of signing with Purdue to play baseball. However, while at Parkland, Kiermaier was a two-time NJCAA All-American and became the career leader in five offensive categories — triples, homeruns, runs, walks and career batting average. But more importantly than his impressive numbers, Kiermaier was under a coach who had numerous connections in the baseball world and went out of his way to gain exposure for Kiermaier. “I didn’t know much about junior colleges, but Parkland was a blessing in disguise,” explained Kiermaier.

Currently, Kiermaier is playing at the second level of Tampa Bays’ seven-tier program. In his rookie ball short season with the Princeton Rays, Kiermaier is experiencing a grueling schedule playing every single day with just three days off until the end of August before the playoffs begin in early September. “It is definitely a grind, but I am loving it so far and just trying to stay healthy,” Kiermaier said in a phone interview from West Virginia.

Positioned in right field with a few starts in center, Kiermaier feels he was hitting well prior to the last three games, but is still batting a .306. “I am in a slight slump right now, but have no complaints. I think the organization is starting to think highly of me. Gaining their confidence is what it takes to move on,” he summarized. Depending on how the season finishes, Kiermaier hopes his next step will be with the Hudson Valley Renegades in New York, then eventually reaching another goal of playing in the same league as the Fort Wayne TinCaps. “I would love to play in front of a Fort Wayne crowd some day,” Kiermaier envisioned.

The Kiermaier family was members at St. Henry Parish in Fort Wayne until Kevin’s sixth-grade year when they transferred to St. Joseph Hessen-Cassel. The middle son of Jim and Chris, Kevin’s older brother Dan is studying turf management at Purdue, while younger brother Steve will start his senior year at Bishop Luers hoping to land a football scholarship with Purdue scouting some early games this fall. “I am so excited for Steve. He is under the radar, but his great attitude and work ethic will take him far,” said the proud older brother.

While Kiermaier is not homesick, he admits, “I really miss being at the lake this summer.” His grandfather has a place on Dallas Lake at Wolcottville where the family spends much of their free time. Kiermaier’s all-time favorite activity, besides baseball, is spear fishing carp hours at a time with his dad and little brother.