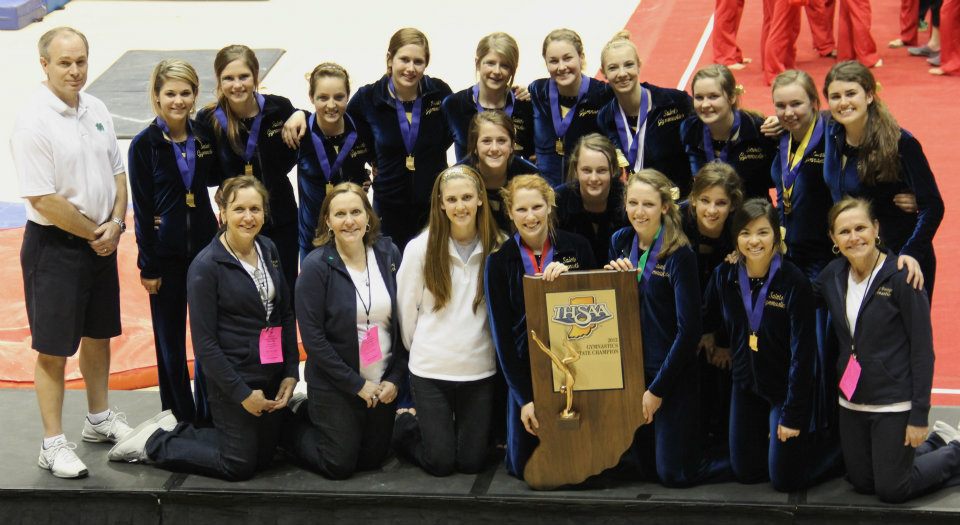 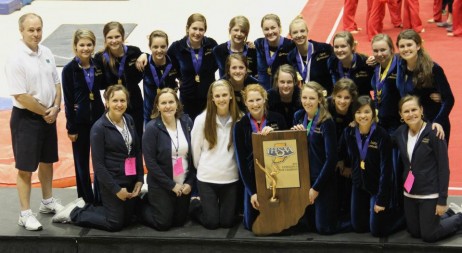 It was Bishop Dwenger’s fifth gymnastics state title under Coach Rosemarie Nix, its first since 2006 and ended Valparaiso’s record four-year stranglehold on the team title. The No. 5 Saints finished with 112.550 points while top-ranked Valpo finished second with 111.975 points. Roncalli was third with 108.600.

“Our motto this year was ‘Dreams are Goals with Halos,’” Nix told Today’s Catholic in an email interview on Monday. “Keeping God as their guide the gymnasts were able to stay focused on their routines and accomplish what they set out for … the dream of being state champions.”

“This was a total team effort, Nix noted. “Everyone contributed to the success. The team had no standout gymnast.”

The Saints didn’t collect any individual titles but had four different gymnasts finish in the top six of three events. Sophomore Katy Linvill placed second on the floor exercise (9.6) and third in the bars (9.575) to finish third in the all-around competition (3.575). Brittany Trahin took second in the vault (9.8), Kaitlyn Coffee was fourth in the vault (9.625) and Carrie Brown claimed fifth in the bars (9.475).

Nix added, “We have been very blessed at Bishop Dwenger to have the support of fantastic fans, which included not only parents and family, but friends and alumni too. It was great to hear the cheering and encouragement for the girls.”

She said, “The meet was very exciting as the team went from the floor, to the vault, to the uneven bars, keeping their lead. Going into the last rotation of the meet, which was the balance beam, the entire team went out of the arena and said a prayer to help them keep calm. What a wonderful testament to the faith these girls share.”