She assumed the leadership duties of the principals several weeks ago. Virginia said she hadn’t really considered becoming a principal before; instead, she had applied a couple of times for the position of English as a Second Language director in the local public schools but didn’t get hired. Another parishioner, who is also in the education field, encouraged her to apply for the principal position when it became available. He was very encouraging, she said, and asked her to discern if God was calling her to this role.

“Now, after doing this, I realized I was looking for jobs where God wasn’t calling me and I was not seeing God’s plan,” she said. “I told Giovani, I realized this is what God called me to do.”

Into the American classroom

Virginia was born in Mexico and lived in her birthplace of Santiago Capitiro, Guanajuato, until she was 9 years old. At that time her family moved to West Columbus, Texas, and when she was 16, they moved to Plymouth, Indiana. She graduated from Plymouth High School in 2002. Virginia graduated from Ball State University with a bachelor’s degree in elementary education and Spanish and a K-12 ESL license. In 2013 she received her first master’s degree in curriculum and instruction with an emphasis in ESL. In 2016 completed a master’s in bilingual education and will be completing a master’s in education leadership and getting her license in the same this fall. 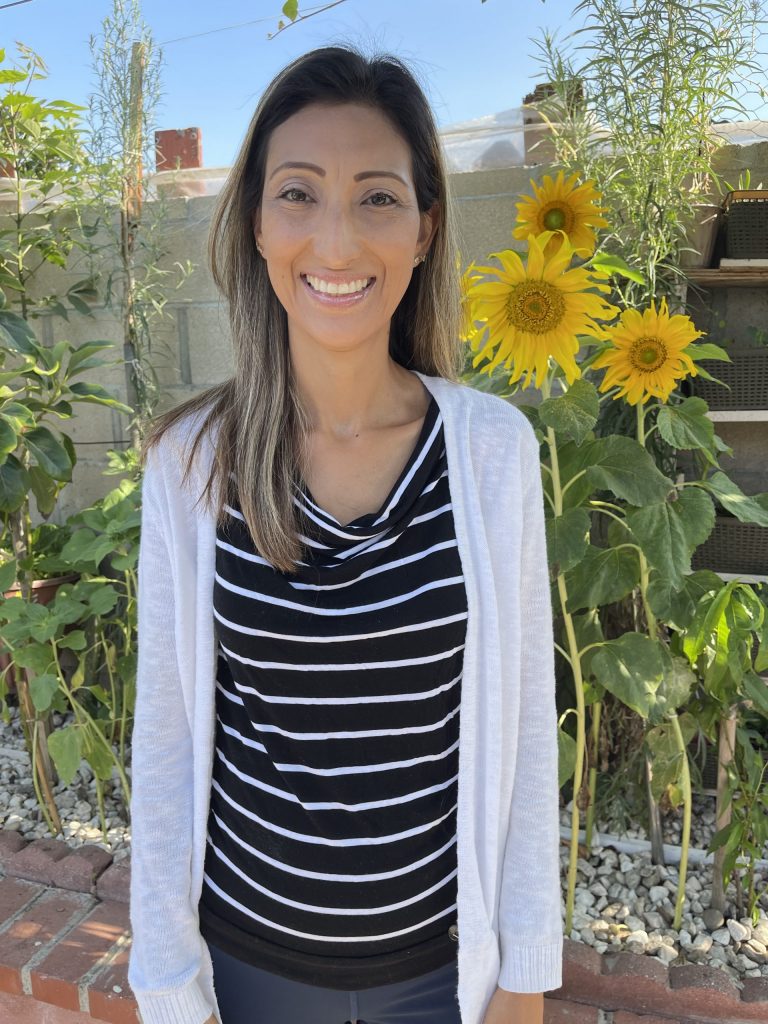 Provided by Virginia Muñoz
Virginia Muñoz is the first bilingual principal at St. John the Evangelist School, a Goshen Catholic elementary at which 78 percent of the student population is Hispanic. She hopes to encourage staff collaboration and believes Catholic schools lay a faith-based foundation for students that parents can reinforce at home.

She taught at Waterford Elementary in Goshen for seven years — one year as an ESL teacher for kindergarten-second grade and the other six years as a first-grade teacher. After that, she worked at Goshen Community Schools Central Office for two years. She was a second- and third-grade ESL instructor at Chamberlain Elementary school for two years and worked one day a week with Goshen Online Academy students at the Boys and Girls Club. During the last three years added three children to their growing family, and Virginia and worked at Merit Learning Center three evenings a week, as well as serving as director of religious education for St. John the Evangelist Parish.

She said St. John enjoys the advantage of having staff members with longevity.

“A lot of school districts have teacher shortages — we don’t have that. We have good teachers who are very committed to the students and to the school and to the faith,” Virginia said.

One area she feels can be improved upon is leadership to guide and help teachers. She said she likes challenges, and one she might encounter is the possibility of staff is not being open to new ideas.

“If things are not working, we can’t just keep doing it,” she said. But, she added, her goal isn’t just to make changes. “I’m here to support the staff.”

“At the end of the day what happens at the school reflects on me,” she added.

Catholic education is important to Virginia because it acts as a foundation that parents can build on. As director of religious education, she has heard parents say they don’t have time to teach their children the faith: She knows from her own family’s experience that talking about what her children learned at school opens up those discussions. “The school (lays) the foundation for parents to build on and reinforce.”

Coming from teaching in public schools, she said, “It’s nice to be able to say to students ‘let’s pray about it’ if they’re nervous before a test, for example, of if they’re having a hard time at home.”

When asked what it meant to her that she was the first bilingual principal in the school’s history, she replied, “I think it’s everything — a mix of emotions. I’m honored, but at the same time, nervous.” She said the nerves come from high expectations.

She can mediate between parents and teachers, if necessary, in a school where 78% of the students are Hispanic.

“Our hiring committee was very impressed with Mrs. Muñoz’s professional qualifications, experience in teaching and administration, ability to solve problems quickly, her commitment to continued growth development for herself and for others, the value she places on making connections and her excellent communication skills,” said Father Royce Gregerson, pastor of St. John the Evangelist. “We think that she will be a fantastic fit for this role because of the deep connections she and her family have in our community. As soon as we announced her hiring, the response was overwhelming. Parishioners have been thrilled to see a member of their own community who is so deeply invested in our parish be chosen for this leadership role.”

“I think that Mrs. Muñoz being our new principal is a particularly great example to children in our community to aspire to a high level of achievement — maybe higher than previously thought possible,” he added. “The fact that Mrs. Muñoz is bilingual and bicultural will be an enormous asset to our school. We are excited to see her use her ability to communicate across languages and cultures to bring people together in our community and help more families find a home in our parish school. She is very well positioned as well, both because of her own language and cultural background and her training and experience in English learner education, to help our school better serve the critical area of our English learners.”

What she hopes to bring to the school is unity and collaboration. She said in the public schools there is more than one class per grade level, so there was more collaboration among teachers. She believes teachers at St. John can share ideas even if they’re not at the same grade level. “I believe sharing ideas and collaborating makes for better teachers and better people.”

She recently thanked an English-language program director she has worked for in the past, because a lot of things he had her do is some of the same things she’s now doing in her new role as St. John’s principal, she said. She can now see that “God led me to the people who prepared me for this job.”