The prolific writer St. Francis de Sales, a doctor of the church, once wrote of bees: “The bee collects honey from flowers in such a way as to do the least damage or destruction to them, and he leaves them whole, undamaged and fresh, just as he found them.” The bishop, known for his tireless work of reconverted Calvinists in France, had much in common with the hardworking insects.

The spiritual connection that St. Francis de Sales found with bees is part of what attracted Anne Therese Stephens to the art of beekeeping. “There’s just a lot of analogies that you can use to see your faith life reflected” in the lives of bees, she said. “They’re such hard workers and they’re not lazy at all. Bees obviously cannot be virtuous, because that’s something just a human can be, but they do exemplify virtue in that.”

Stephens, director of the Rite of Christian Initiation of Adults at St. John the Baptist Parish in Fort Wayne, tackled a new endeavor this year: making the paschal candle for her home parish out of beeswax from the hives she maintains.

Stephens enjoys the great outdoors and wanted to find a way to bring a touch of country living to her life in the city. Her sister, who lives in Wisconsin, started keeping bees before she did, but she wanted to be more involved in their day-to-day care than the occasional visit allowed. So, when a friend connected her with a local farmer who allowed her to keep the hives on his property, she got started with her own beekeeping. She has been maintaining her hives for about three years now and has four hives at present. 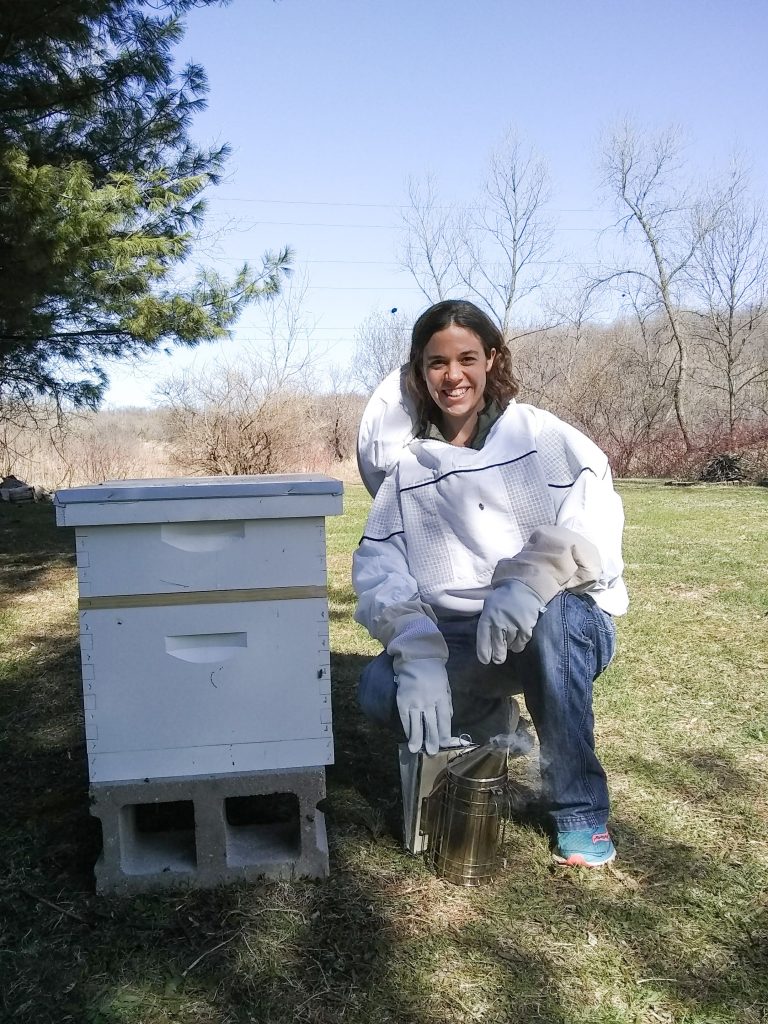 Photos by Jennifer Barton
Anne Therese Stephens with her beehives. Beekeeping has given Stephens a deeper insight into nature and God’s hand in all of creation.

In that time, she has become fascinated with honeybees and the complex system that keeps the hive running smoothly. Each of the insects knows the part they play in it, she said.

Much of what she has learned about the bees has come from independent study, particularly reading books about the subject. Interestingly, bees are considered livestock, though they are the easiest to keep due to their self-sufficient nature.

“The saddest part,” she remarked, “is not being able to live on the place where my bees are, just because it would be so much fun to have a lot of land and have bees and see them – just sit with a book and just watch the bees work. Bees are just fascinating. I feel like there’s still a lot for me to learn.”

She collected their honey in prior years but had not dabbled in candle making before last fall. Using the beeswax to make candles, she said, had “always been in the back of my mind,” but she wanted to go further, stating, “I had the idea of making the paschal candle.”

Stephens started out small, teaching herself how to make little candles, which progressively became larger. But to make the paschal candle, she had to get pastor Father Andrew Budzinski to agree. 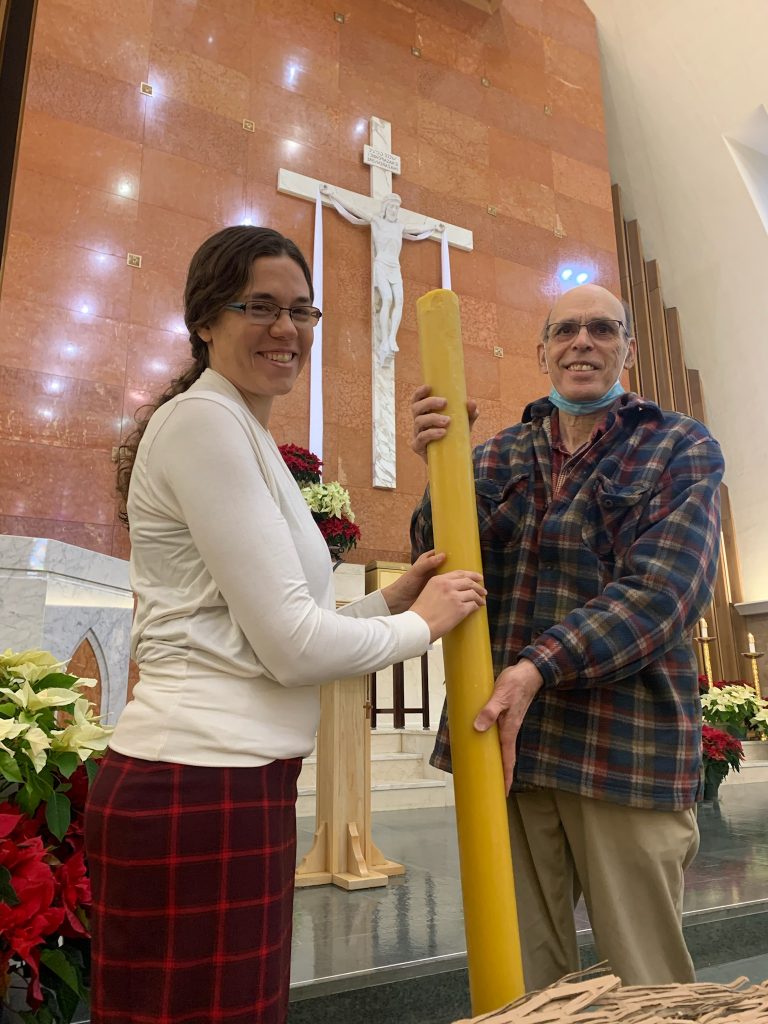 The paschal candle at St. John the Baptist Parish, Fort Wayne, was made by hobby beekeeper and parishioner Anne Therese Stephens this year from wax harvested from her hives. Fellow parishioner Art Cislo, right, decorated the finished candle with images of St. Joseph and the Holy Family prior to its first lighting at the Easter Vigil.

He had a previous interest in beekeeping, so they had common ground to begin the discussion. “I was talking to Father Andrew in the fall of last year and somehow in the conversation he said something about how he would be totally fine if I would make the paschal candle.”

Making the candle was a bit of a learning experience for Stephens, as beekeeping has been. But with the help of internet tutorials, she was able to successfully melt and pour the 10-pound candle into a PVC pipe mold. “There were a couple of points in time that I was nervous because Father Andrew was counting on this candle. … Even the night of the Easter Vigil, when Father Andrew was lighting it, I was like, ‘Is it going to light?’ because you don’t test it beforehand; you want a fresh candle.”

It did light, and things turned out so well that Stephens plans to make next year’s candle, too. She said she will adjust her process from what she has learned this year.

Not only was the candle handcrafted, but the artistic adornments were created by another St. John parishioner, Art Cislo. He has been designing and painting the parish’s Easter candle for around five years. At the suggestion of Father Budzinski, Cislo created six scenes featuring the Holy Family and St. Joseph in particular, in honor of the Year of St. Joseph.

The candle is a bit different from the typical Easter candle in that beeswax is more of a yellow color than the pure white that most people are familiar with. But Karen Eckrich, parish administrative assistant, said that “it was a cool unveiling at Easter Vigil” and that the candle itself “smells absolutely wonderful.” 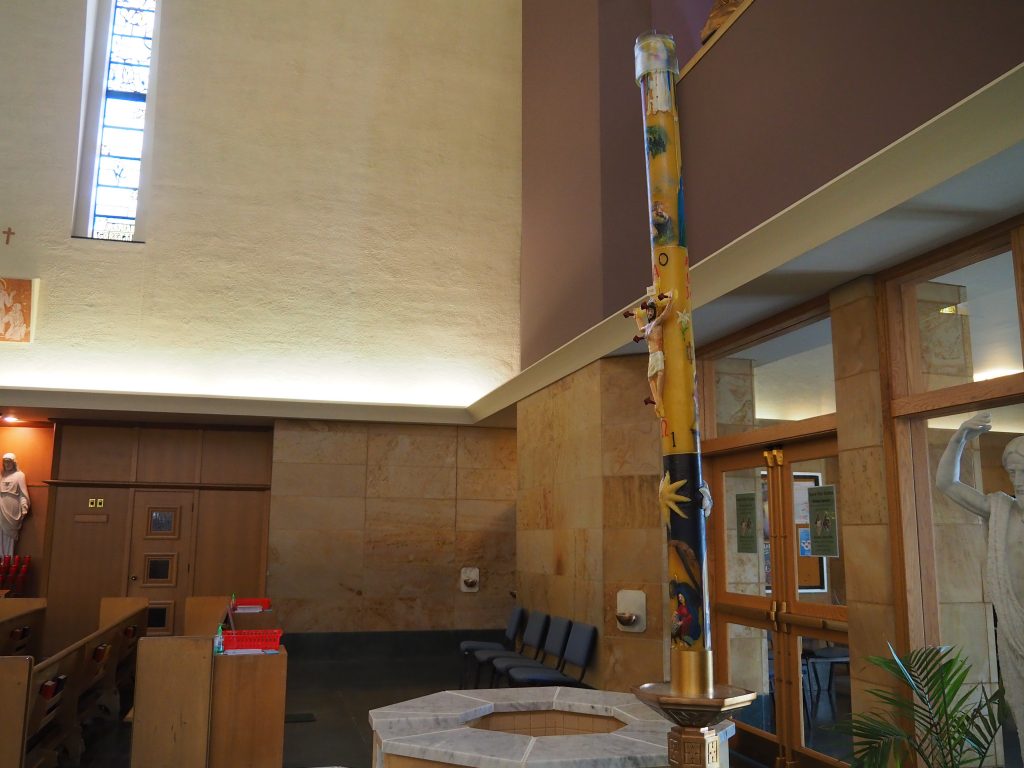 The candle rests in its stand at St. John the Baptist Parish, Fort Wayne.

Beekeeping has given Stephens a deeper insight into nature and God’s hand in all of creation.

“It’s very contemplative, and being able to meditate on the way God created these little creatures and just being able to work with them. … There’s an appreciation,” of their work.

Making the paschal candle was another opportunity to combine prayer and work. She spent much of the time meditating about the candle’s meaning as she melted and poured the wax into her homemade mold.

“It was just a beautiful experience at the Easter Vigil, during the Exultet, when it talks about the candle quite a bit and it talks about the wax that was made by honeybees and the work of the servant’s hand. I was just thinking and meditating upon that; that it was me who made the candle,” she said proudly.