“I think people appreciate that the church is being well taken care of and that beauty is being put as a priority.”  — Caroline Cole

The difference a simple improvement makes to a building can be astounding. The floors one walks on can easily be dismissed as an unimportant aspect of a room or even a church, but flooring lays the foundation for a strong space. When St. Joseph Parish in Mishawaka began a capital campaign to correct deferred maintenance issues related to the age of the church, pastor Father Chris Lapp saw an opportunity to be deliberate about making a lasting change in the beautiful, 1890s-era Gothic-style church.

Father Lapp estimates that the parish, originally named Holy Guardian Angels, is on its third or fourth church building since its inception in the 1840s. Msgr. Curt Suelzer, pastor of St. Joseph from 1944-77, maintained the integrity of the church’s interior beauty, including retaining the high altars, though he was the first to carpet the floors, a change that the parish made in the last year when new wood floors were installed by Hoosier Hardwood of Goshen.

“When we started the capital campaign to correct all the deferred maintenance, I just wanted to make sure that we did something intentional and better, so my initial thought was we’re not going to put carpet back,” Father Lapp stated. Instead, his vision was to bring the church closer to the original design envisioned by the early parishioners. 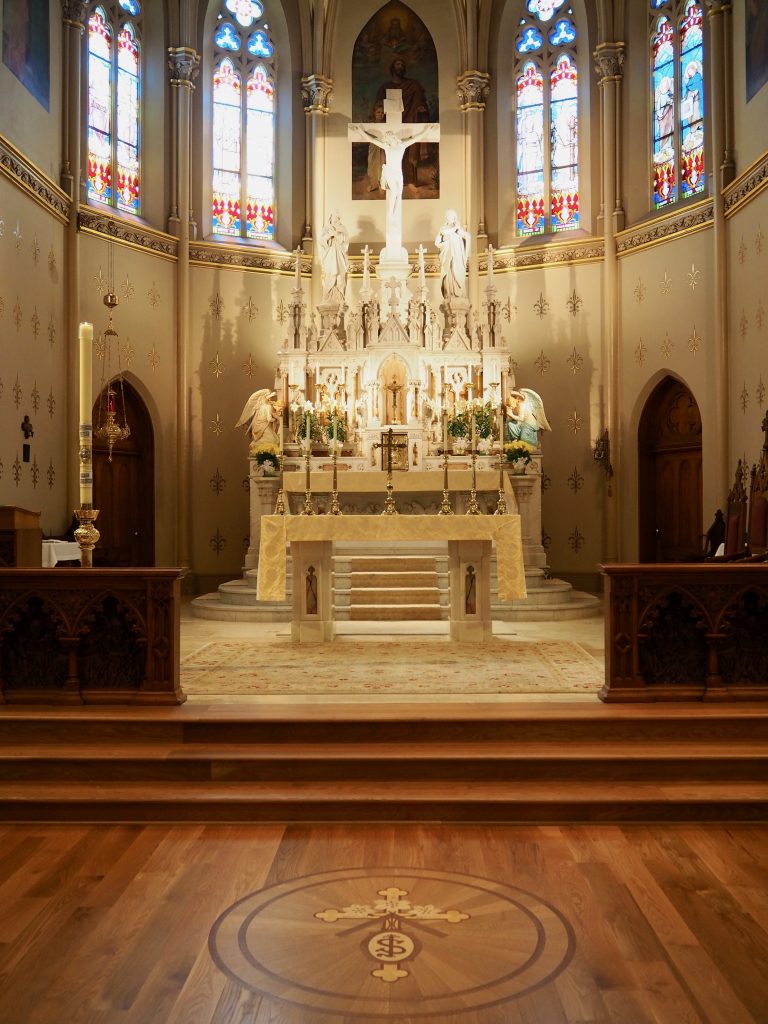 The medallion on the floor before the main altar was designed by Caroline Cole, pastor Father Christopher Lapp and Rich Brubaker, and incorporates symbols representing the church’s patron saint.

To do this, he enlisted the aid of several parishioners including Caroline Cole, who studied architecture at the University of Notre Dame, a program that specializes in classical architecture. She gave of her own time and talent as a faithful member of the parish. “It’s just a beautiful church already to pray in,” Cole remarked.

Restoring the original flooring was not an option, as studies done on sections of the floor showed that the pine planks were not suited to refurbishing, and time had forced previous generations to utilize leveling compound to even out warped places in the floorboards. Plywood was placed atop that.

Instead, the parish chose to overlay a new floor made of oak, known for its durability and longevity, over the plywood. With its layers of oil finish, “that brings the wood into harmony with the other wood that’s already in there,” mainly the doors and the intricately carved altar rail, Cole elaborated. “And we wanted to emphasize the main aisle leading up to the sanctuary and the altar.”

The aisle’s side border of “intertwined circles and four-petaled flowers” relates to the similar carved flowers on the ends of the pews. 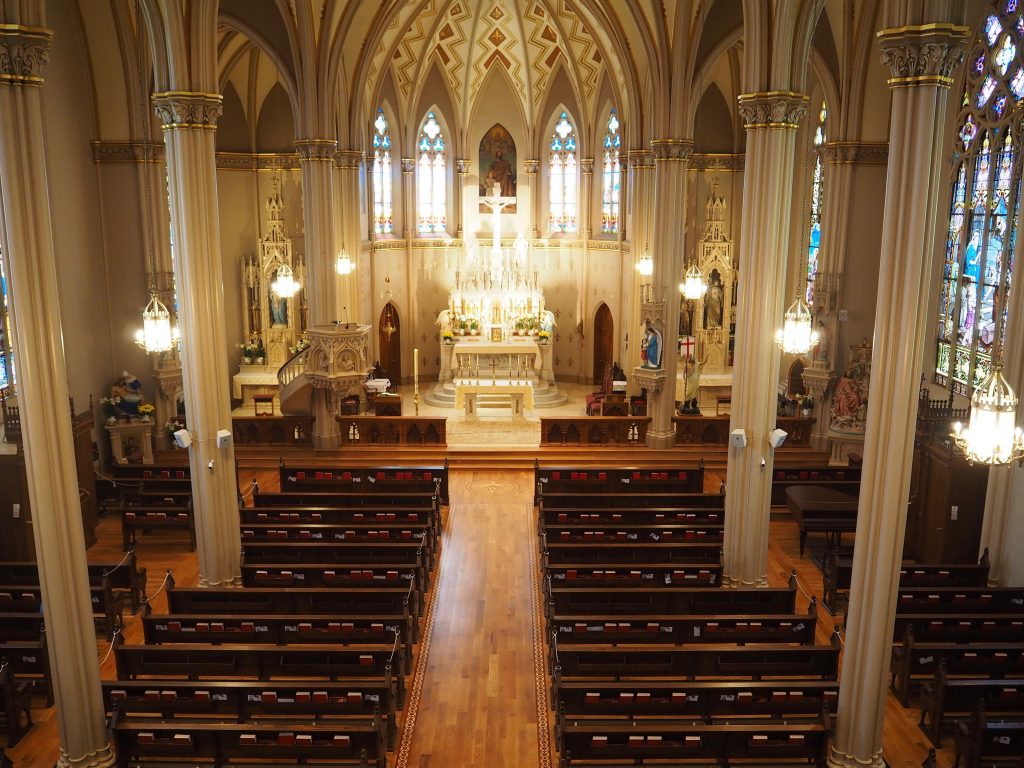 Photos by Jennifer Barton
Built in the 1890s, St. Joseph Church in Mishawaka has retained much of its Gothic beauty. During a capital campaign to maintain the parish’s church and school structures, pastor Father Christopher Lapp and his team opted to replace worn carpeting with wood flooring, mirroring the church’s original look.

Collaborating with Father Lapp and Rich Brubaker, the facilities director, Cole designed the two medallions placed at the front and back of the aisle. Situated at the apex of the church before the altar, the main medallion, dedicated to St. Joseph, features an “SJ” monogram set over a cross, with a carpenter’s square and three lilies, a flower traditionally associated with the saint to depict his purity.

“I think it’s cool how the name of the church can kind of direct what the decoration inside the church is, so then visually you’re just kind of drawn to reflect on that saint and that particular saint is praying for the parish,” Cole commented.

Of great importance to Father Lapp was the baptismal font. Since the font itself is rectangular-shaped, he wanted to find a way to reflect the traditional octagonal shape of baptistries, representing the eighth day after creation. The design team opted for the font itself to be moved from the front of the church near the St. Joseph altar to the rear entrance and placed amid a specially designed medallion with an eight-sided motif. Each of the four sides is embellished with fleur-de-lis crosses – stylized lilies, another nod to the church’s patron saint.

Throughout the renovations, Father Lapp was determined that the parish should “put our best foot forward” and consider renovations that would last for generations, not merely changes offering only short-term solutions. He is aware he is merely a steward of the church, safeguarding it for future generations. There is always more work that could be done to care for the church building, and he is looking at long-term improvements. 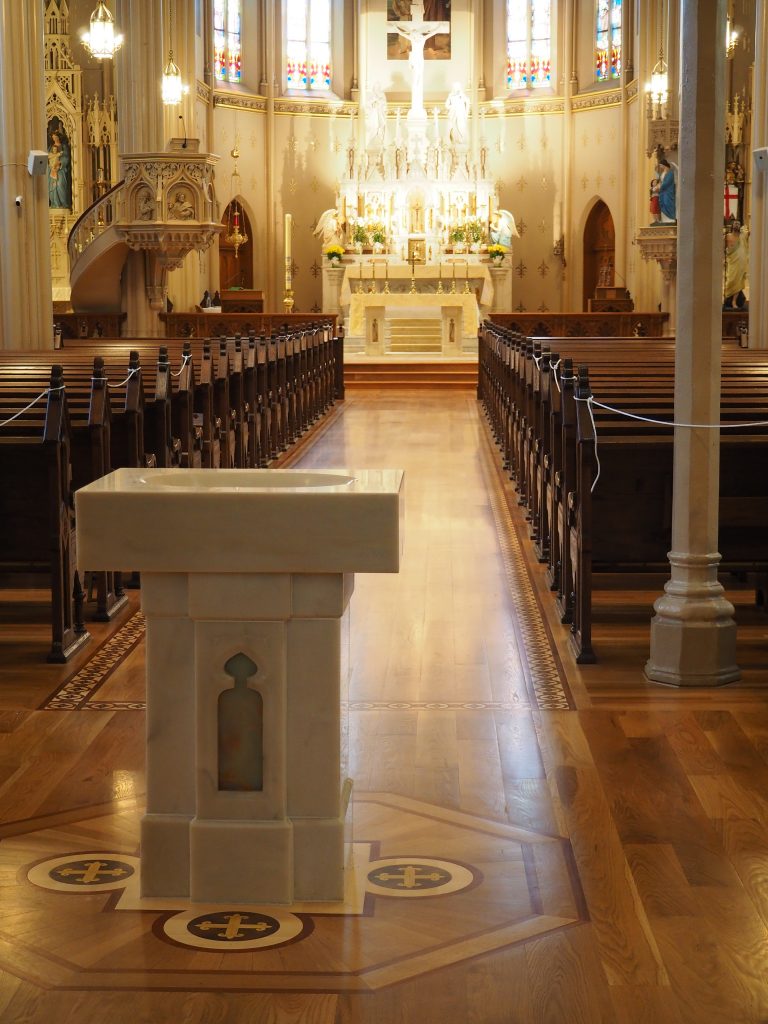 The new flooring is a good start, Father Lapp believes, as it gives the parish a solid foundation – in more than one way – on which to continue the process of beautification. “When all the deferred maintenance is done, I’m going to try to set our sights on a more long-term thing, but really keep our eye on the ball of taking excellent care of what we have received.”

“I think people appreciate that the church is being well taken care of and that beauty is being put as a priority,” Cole added. “It kind of represents investing in the Church with a capital ‘C’ by taking care of the church with a small ‘c.’”

None of the work could have been completed without the supportive parishioners who comprise St. Joseph Parish. Father Lapp is pleased with the positive feedback he has received from numerous members of the faith community. “I’m thrilled to have a beautiful, historic church that also has a parish community that can reasonably – not just sustain what we have, but also set our sights on really taking excellent care of and even reclaiming and restoring the beauty that we’ve maybe seen go by the wayside in recent decades.”

His greatest concern during the renovation process was how long the church would need to be closed to lay the floor and complete the pew restoration. The pews had to be taken out and shipped to New York for refinishing by the Keck Group, which took a total of two months. Mass was held in the gymnasium during that time, and the renovations were completed in time to celebrate the solemnity of St. Joseph back in the church building.

Father Lapp is extremely proud of what the parish community has been able to accomplish as well as the elegant church itself. In some ways, he considers the completed work a testimony of what can be done to preserve and upgrade other churches in similar situations.