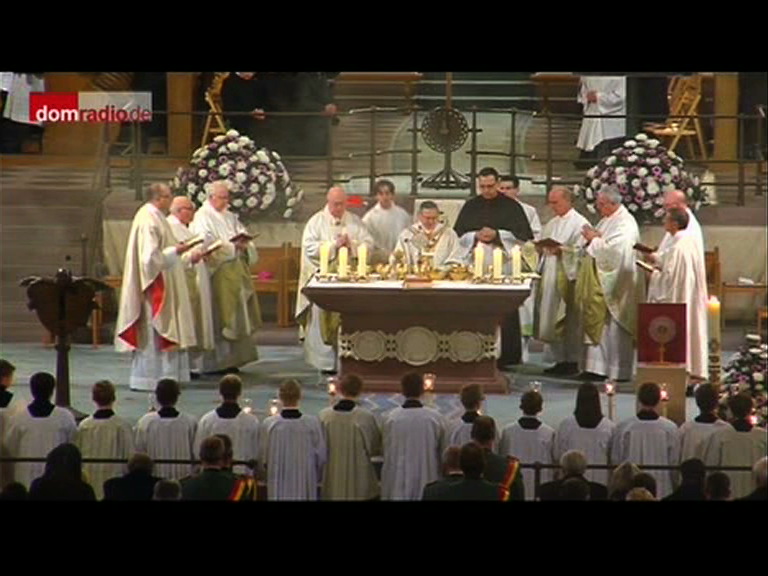 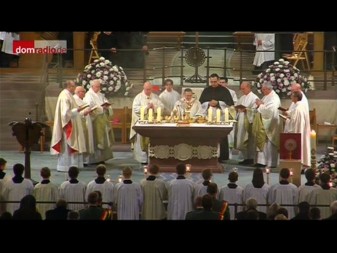 PADERBORN, Germany — The Beatification of Mother Maria Theresia Bonzel, foundress of the Sisters of St. Francis of Perpetual Adoration, whose motherhouse is in Mishawaka, has brought much joy to the sisters, many who travelled to Paderborn, Germany, for the beatification Mass and celebrations through the week.

The prefect of the Congregation for the Processes of Beatification and Canonization, Cardinal Angelo Amato, celebrated the beatification. Bishop Kevin C. Rhoades was a concelebrant of the Nov. 10 Mass at the cathedral in Paderborn.

The cathedral was filled with about 100 of the Sisters of St. Francis from Germany, the two U.S. provinces, the Philippine province and the mission in Brazil. There were also hundreds of lay people, clergy — including priests from the Diocese of Fort Wayne-South Bend — and other religious.

“I had a real sense of the universal Church, as several languages could be heard around me while waiting for Mass to begin,” said Sister M. Anita Holzmer, a Sister of St. Francis of Perpetual Adoration, who resides at the University of Saint Francis in Fort Wayne, a university sponsored by the Sisters of St. Francis.

“Hearing all those people sing, along with the beautiful choir, brass quintet and powerful organ was like a foretaste of heaven, where we will all be praising God with the angels and saints … and Blessed Mother Maria Theresia,” Sister Anita added.

The moment was especially poignant for the sisters from the Philippines, noted Sister Anita. Typhoon Haiyan, which devastated parts of the central Philippines on Nov. 8, damaged some of the buildings of the sisters’ motherhouse and large school.

“Our newly beatified mother will intercede for them and all concerned with her prayers,” Sister Anita said. “Despite the tragedy in the Philippines, we can never render enough thanks to God for all the blessings He has bestowed on our congregation in having our mother’s holiness recognized by the universal Church. To Him be the glory!”

Sister Mary Evelyn Govert, said of the beatification, “It was a powerful experience of one woman’s life. It shows the epitome of what I am called to in Jesus, Francis and Clare. It was a profound spiritual experience. She was a simple woman who lived out her call.”

“There was also a sense of the universal Church and of how her influence is seen in the sisters there, not only from Germany and the U.S., but also from Brazil and the Philippines,” Sister Evelyn told Today’s Catholic in an email, “and representatives from Rome and elsewhere.”

Sister Elise Kriss, president of the University of Saint Francis, called the beatification, “a once in a lifetime experience.”

The sisters arrived at the cathedral in Paderborn almost two hours in advance and took their places with the sisters from throughout the world.

“It truly gave us a sense of the international nature of our congregation and the great work that was started by Blessed Maria Theresia, now carried on throughout the world,” Sister Elise said. “We also became aware in recent days that our charism of Perpetual Adoration is actually taking place somewhere in the world every hour of the day and night.”

“The beatification ceremony was a wonderful testimony to the life of our foundress,” Sister Elise said. “What was most touching for me was the unveiling of the beautiful portrait of Blessed Maria Theresia Bonzel and the transfer of her relic by the cardinal to Sister Magdalena, our General Superior here in Olpe.”

Eventually there will be a relic of Blessed Maria Theresia in Mishawaka as well.

“As you could see, I’m sure, the Mass was magnificent in every way and it was an honor for me to be present for this very special event in the life of our congregation,” Sister Elise said in her email from Germany. “It is a very special blessing that the beatification of our foundress took place this year during the 150th anniversary of the founding of our congregation here in Olpe in 1863.”

On Monday, the body of Blessed Maria Theresia was transferred from the motherhouse in Olpe to the new Adoration chapel at St. Martin’s Church in downtown Olpe. The Adoration Chapel at St. Martin will have perpetual exposition of the Blessed Sacrament.

“St. Martin’s Church is just a few steps from where Blessed Maria Theresia grew up,” Sister Elise said. “It seems right that her bodily remains will return to where her life and spirituality began.”