“All of the humble, the ordinary (of life) is redemptive,” Dr. Scott Hahn illuminated about St. Joseph. “His supremacy is the heart of the Father, the Son and the Holy Spirit.”

On Friday, April 23, Hahn, of the University of Steubenville, shared a scriptural reflection on St. Joseph, the silent, humble and holy husband of Mary, father of Jesus, at Pfiel Auditorium on the campus of Holy Cross College in South Bend. The presentation was made to both a livestreamed and a socially distanced and masked in-person audience. Invited by his former student, Director of Campus Ministry Andrew Ouellette, Hahn’s visit celebrated the Year of St. Joseph, declared by Pope Francis Dec. 8. 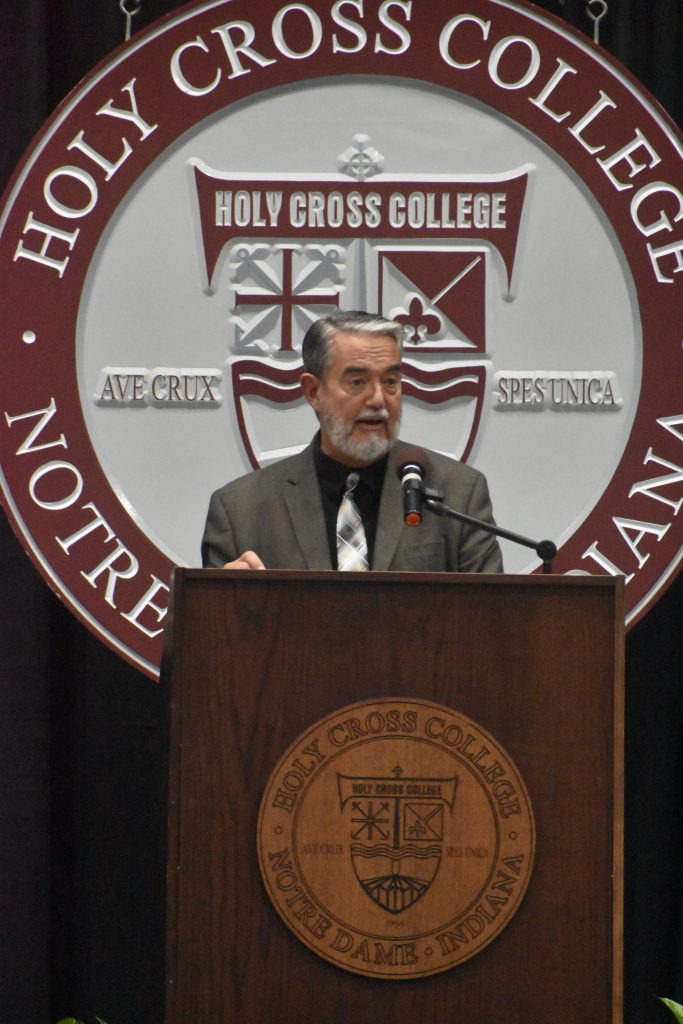 Photos by Jennifer Miller
Dr. Scott Hahn spoke about St. Joseph and his model of fatherhood to a virtual and live audience at Holy Cross College April 16, during a year dedicated to the saint.

He encouraged listeners to read Pope Francis’ apostolic letter on the saint, “Patris Corde,” where Joseph is described as a tender, loving, obedient, accepting father, “creatively courageous” and working in the shadows.

One of Hahn’s strengths during the presentation was a solid, theological narrative clearly supported by his personal prayer and faith life. Hahn’s examples and antidotes, from being a grandfather of adopted children to being the father of a seminarian about to be ordained, fleshed out the rich ponderings.

He proposed the question, “Is he a father?” as Joseph did not play a biological role in the conception of Jesus. He read from Matthew Chapter 1, which he called the “St. Joseph annunciation” because the Davidic genealogy is described, and Joseph is named as “the husband of Mary.” According to Jewish custom at the time, Joseph then would have had the legal rights of a father in the naming of a child — as written in Verse 25 — as well as the duties of protecting the mother and child. Jesus, too, then had full hereditary rights through this line.

Hahn explained adoptive fatherhood, which transcends the biological. Citing Luke Chapter 2, Verse 33, he presented Joseph as an earthly image of Jesus’ heavenly father and noted that Jesus is described as the carpenter’s son.

Explaining how the theological can be greater than the biological, Hahn used the example of God being more of a father to his own six children than he himself is. “Fatherhood originates in the relationship in the mystery of the Trinity, that is, life giving,” he said. Here there is eternal generation. It truly was the privilege of St. Joseph to be the earthly father of Jesus, Hahn said. 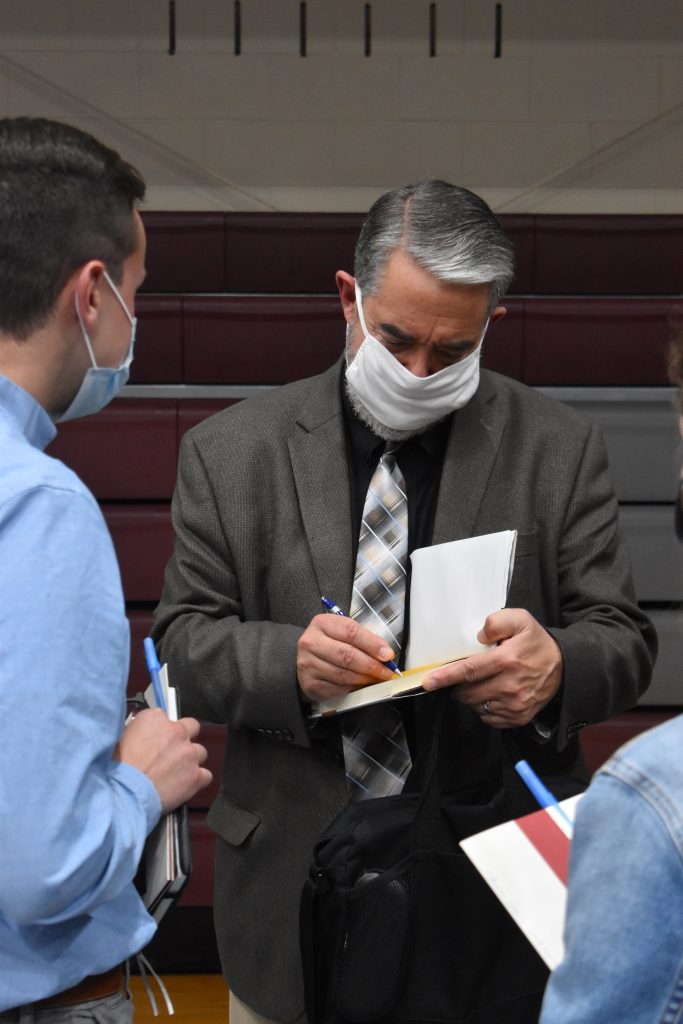 Hahn signs Holy Cross College students’ copies of his new book, “Hope to Die: The Christian Meaning of Death and the Resurrection of the Body,” which was released in March 2020, providentially in time for the COVID-19 pandemic.

Hahn’s presentation highlighted how God works through the ordinary in salvation history. St. Joseph is a prime example of such divine movement. “Day after day, week after week, year after year, man and woman doing the same work.”

“The Blessed Trinity is the only thing that eternally exists,” he pointed out. “It is not a corporation, but a family. We’re not just citizens or employees. We are born as a son or daughter, a relational ontology, not as an individual. In the natural order of things, they point us to the supernatural. Don’t reduce it down. Be a daughter or son of God. The Holy Family still is an earthly outpost of the heavenly home, here and now.”

His persuasive speaking style was reminiscent of an engaging, dynamic style of preaching, complete with gestures, but subtle and refined enough to allow the listener to feel as if they were listening to their own grandfathers speak from a rocking chair. Explaining how even Joseph was “not given an easy street” to live on — “anything but!” — he encouraged the audience to live their baptismal call to be a child of God, despite obstacles or difficulties in life.

“The Holy Family is the proper context of our salvation to come. We’re not just acquitted or healed: We are adopted, reborn and regeneration for life. We are children of God,” he said in closing.